My boss had just about had it with people severely dissing the Oakland Book Fair (or, the 48th California International Antiquarian Book Fair, to be exact) before it ever even happened. Sure, Oakland gets a bad rep in the news – even we know that. But do you know anything about what Oakland does well? Probably not, seeing as the news reports only a bunch of crazy, cruel and creepy happenings in the Bay area city. Let us tell you what Oakland does do well. Baseball, basketball and… Book Fairs.

Look at how beautiful the venue looks behind us. (Yours truly with Hélène Golay of Lorne Bair Rare Books, opening night of the fair. Hence the big smiles. By Sunday afternoon we probably looked more than a little manic).

Some of you may be wondering why the California ABAA fair was in Oakland this year rather than San Francisco, as was in years past. It’s a pretty easy story to tell – two years ago the Northern California Chapter book fair committee learned that the 8th & Brannan Concourse, where the fair had been held in the city, was no longer accepting contracts for exhibitors. Fort Mason was considered in the running for the setting, but its somewhat ill-suited location and extremely hard concrete flooring (which, in heels, all I can say is OUCH) as well as the fact that they had no appropriate dates available… well, let’s just say it easily lost out to the Oakland Convention Center – a venue more nicely appointed with better parking, easier public transportation, a nice Marriott hotel attached and, dare I say it, a non-leaking roof!

Many sellers went into the fair with more than a bit of trepidation – a perfectly understandable emotion at a new venue in a new city. For some booksellers, fairs can make or break your week, month, or even year in terms of revenue. For us at Tavistock Books, I would say that this was one of the better fairs we have exhibited at in quite a while – and, as a matter of fact, quite a good number of booksellers approached us at our booth (even way out in Siberia, where it was located) and in the course of discussing the fair stated that this was the best California fair at which they had ever exhibited. If you ask me, that is a solid mark of a success!

Though load-in did not begin until Thursday afternoon, our week began way before that, as we had a champagne cocktail reception at the store the Wednesday prior. We had quite a few new visitors to the shop – and it was great to get to know some other booksellers a bit better. Not to say that doing this did not cause a certain amount of stress and mess (we currently have 5 unopened champagne bottles sitting in a water bath of ice melted from a week ago behind our main display case); and as we wanted the shop to look at least somewhat nice and not like someone had broken in and raided our shelves, we did not begin to pack for the fair until the Thursday morning of load-in! We, of course, forgot some basic items, such as bookslips, the cashbox (somewhat important since customers seem to get weird and cagey when you tell them that its too bad you can’t give them change), and a calculator (extremely important for those of us who should have failed basic arithmetic long ago). Luckily, the shop was only 1.7 miles from the venue, and therefore we had many opportunities to go back and forth for what we needed.

Booth 100: Before, During, Almost There & After! (Photobomb by Joachim Koch of Books Tell You Why, Inc.)

Thursday night was the traditional exhibitor reception, which we anti-social & sickly beings at Tavistock Books skipped in favor of a good night’s sleep and a couple Midsomer Murders episodes (oh wait, that was just one of us… and, hint-hint, it wasn’t Vic) – but we were told by word, not to mention the yawns and drooping eyelids seen Friday morning, that it was a great night all around! The fair opened 3pm Friday afternoon, closing at 8. Saturday & Sunday the fair lasted most of the day, and luckily this past weekend buckets of rain poured on the Bay area – driving people away from their paddleboards and tennis games into a Book Fair where it seems they had little choice but to spend money! 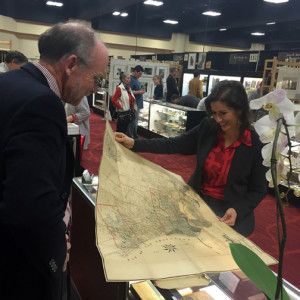 Vic and Oakland Mayor Libby Schaaf oooh and ahhh over a map of Downtown Oakland in the late 1800s.

In regards to the Book Fair in the press, opening evening of the fair Oakland Mayor Libby Schaaf was among the crowd browsing books and being amazed by the treasures to be found around the fair. She was particularly taken with some of the items in the Tavistock Books booth, as a matter of fact, as we had two maps of Oakland and Alameda County from the 1880s. (Would link them here, but they did in fact sell at the Oakland Fair. And no, they did not go to Libby Schaaf!) It was not only great press for the book fair but also felt like a warm welcome to the fair’s change of locale. Click here to read about the mayor’s visit (and see another picture of her and Vic, which he is also really proud of). 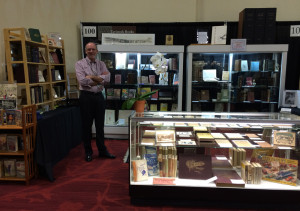 Vic Zoschak of Tavistock Books, in Booth 100. (Which is really stupendously set up and decorated, a fact that you are all welcome to comment on…)

Now, my boss insists that you indulge me with a few words about administration at the fair. White Rain Productions puts on a spectacular shindig. (I am amazed that Microsoft Word did not yell at me for “shindig.” I have never, ever written it in a sentence). Load-in on Thursday was easy, and despite the fact that our trophy cases needed to be moved and one entire case had no glass shelves in it (a curious phenomenon, if you ask me) we had at least five people come to help us and the problem was solved in relatively little time at all. The concessions at the fair were exceptional (it is not often that you see a delicious Veggie-filled Soba Noodle salad on the menu right next to: “Hot Dog. $5”), with an Exhibitor Hospitality room (there was popcorn… be jealous) and an espresso stand. Advertising for the fair was spectacular – the colorful poster advert to be seen all over the hotel, with even BART announcing the fair on their signs throughout the Bay Area.

Exhibitors numbered around 190 to 200 (remember, I’m arithmetic challenged, so don’t quote me on the exact number), hailing from all over the world – California to the Czech Republic, Australia to Jolly Old England. Most traveling exhibitors stayed in the Marriot itself, an easy public transport ride (the 12th Street Bart Station just a half block’s walk from the hotel) from there to the city, to Berkeley, or to the airport. Also, a good number of cute restaurants and cafes surround the immediate area within a couple blocks (try Desco – great food, and if you get there, ask them to turn the music down just a notch for me). On Sunday Vic gave two Seminars, one on Book Collecting and the other on valuing your books (Book Collecting 101 and What’s This Book Worth?, respectively), and I had several fair-goers return to our booth later that afternoon especially in order to tell me he didn’t embarrass me, which leads me to believe that my last words to him before he left for his grand entrance (V: “Alright Ms. P, I’m off!” M: “Brilliant. Don’t embarrass me.”) were probably shared with the general public.

However… as I bring this blog to a close, if you ask me my absolute favorite part of the Oakland Book Fair? It’s that every night I got to go home to my own house, sleep in my own bed, and decide what I was going to wear 20 minutes before leaving home the next morning. There is something to be said for having your home base with you!

See you in 2017, for the 50th Anniversary of the ABAA’s California International Antiquarian Book Fair!