The Lord and Master of Tavistock Books recently finished his 21st course at Rare Book School in Charlottesville, Virginia, having started this love-affair back in 1998! To know more, read on!

So, Vic, you’ve just finished another summer at RBS! How was it?

Let’s start with the word, “Inauspicious.”  Not a word one would normally associate with Rare Book School, at the University of Virginia, Charlottesville [or, to those with some familiarity, C'Ville].  But the word applies this year.  Why?  Because after flying 5 hours Saturday from SFO to IAD, then waiting another 7-1/2 hours for the regional flight down to C’Ville [scheduled 10 pm departure, delayed 3 times], IT WAS CANCELLED BY UNITED AT 12:30 am that night!  Can you say Super Shuttle?  The end result- I didn’t get to sleep till 3 am that Sunday morning.  Yikes, was I a tired puppy that day!
However, as in most such situations, there was a silver lining.  Guess who was also waiting for the flight to C’Ville?  Terry Belanger, Founding Director of Rare Book School.  So, at least, during that ‘delay’ time Terry & I were able to converse on many divers topics.
And you ask, “How was it?”   Simply…  great.  I’ve taken a goodly number of courses [21, since 1998], and all have had aspects of greatness.  This one, THE HANDWRITING & CULTURE OF EARLY MODERN ENGLISH MANUSCRIPTS, taught by the paleography expert, and very personable, Heather Wolfe, Curator of Manuscripts of the Folger Shakespeare Library, I would rate in my Top Ten.
How many times have you been to RBS? You hold the record for attendance, no?

Yes, with 21, I’ve been told I now hold the record for “Most courses attended”.

The beautiful Alderman Library, where, deep down inside you can find dozens of RBS students!

Why go every year?

A couple reasons…  first, RBS is the premier place where one can find week-long subject-specialty courses on the many divers aspects of the ‘Rare Book World’.  And I believe knowledge is a ‘critical success factor’ for those in the antiquarian book trade, so these courses add to my  knowledge base.

Second, there are few other places where you’ll find, all at one time, ~ 60 other like-minded folks all not only willing, but eager, to discuss rare books.  Such not the case in Alameda CA, where on a given day, I’ll see Steve the Postman & that’s about it!  So in C’Ville, one can’t help but make bookish friends…  I’m still in touch with folk I met at RBS in 1998, and subsequently.
Third, it’s just plain fun!  C’Ville is a fantastic college town, with some wonderful restaurants, and a goodly number of bookstores.  What’s not to like?
What, in your opinion, was the best thing about the course you took this summer?


The course focused on the English Secretarial hand, a script, for the most part, totally impermeable to me prior to July 20th.  This not to say I’m now fully conversant, not by a long shot, but now I have the tools to decipher much of what I’ll find in front of me.  The challenge going forward will be to maintain that little progress I made during the week.

As to the day-to-day schedule, I haven’t detailed that here, for Cynthia Gibson did it recently for an ABAA blog post.  My day-to-day was similar, albeit with a different subject.
Not that it’s a contest, but could you tell us your favorite course ever taken?

Probably ILLUSTRATIVE PROCESSES, my first course, taught by Terry Belanger, taken back in 1998.

Would you tell every book enthusiast to go to RBS every year?

Well, certainly I advocate it.  I so much believe in what RBS can provide to an antiquarian bookseller that I established the Tavistock Books Educational scholarship back in 2011 [2012?].  For a young bookseller, I’ll pay the tuition to the RBS course REFERENCE SOURCES FOR RESEARCHING RARE BOOKS, taught by Joel Silver, Directory of the Lilly Library [for those interested, details can be found on the RBS website].  So yes, you could say I would tell all to go every year, as I certainly follow my own advice!

When book-minded people get together, dinners and drinks are common occurrences! What is your favorite social aspect of the weeks? 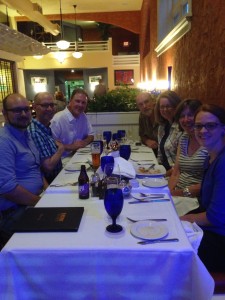 Vic (far rear on the right) and clan at Hamilton’s on the last night of RBS!

Sunday night, after the opening reception/talk, folks sign up for a meal at a nearby restaurant.  It’s a great ice-breaker for ~ 10 people to get to know each other, as well as sample the fare of the local eateries.  Our 10 ended up at Michael’s Bistro & Taproom, a C’Ville institution.  And then Thursday night is bookseller night, where the local bookstores stay open a bit later to accommodate the RBS student’s schedule.  After, I always get a half-dozen or so folk to join  me at Hamilton’s on the Mall.  Been going there since ’98, and haven’t ever had a bad meal, not even a so-so one.

If you stay on the Lawn, then one social aspect is the gathering of folk outside one room or another, and drinking, talking, playing music.  Very social…  and one can always tell the next morning those that joined in!
All-in-all, a lovely week, and I met some terrific folks I know will be friends for a long time.  And while I’m a bit wistful that it’s all over so quickly, I look forward to next October, when the RBS staff announces the 2016 schedule.  I’ll be there, you?
Click here to learn more about Rare Book School!