In August of 1809, a boy was born in Lincolnshire, England, who would go on to become one of Britain’s best loved poets. This boy was talented as a writer early on, and together with two of his brothers published a local book of poetry by the time he had turned 17. His family grew up rather close, and though he enrolled in Trinity College, Cambridge in 1827, he was forced to drop out before getting his degree and return home when his father passed away four years later.

Do you know who it is yet? Some of you may have guessed, given the title quote of this blog. Once dropping out of Cambridge, Alfred Tennyson spent the next few years of his life taking care of his family. His second book of poetry, published in 1833, was met with quite a large amount of criticism from readers – despite it having the masterpiece “The Lady of Shalott” in it! Unfortunately Tennyson was not able to take the criticism in stride, and was put off of publishing again for a decade. Though not much time was spent above on detailing Tennyson’s rather homely and happy childhood, it should be noted, due to the fact that it helped inspire much of his creative writing, that within this decade he experienced quite a few hardships – his close friend (and soon to be brother-in-law) Arthur Hallam died suddenly. Not only did his death shake the core of the family, but they then moved to Essex where they lost a large portion of their fortune in a bad investment. Tennyson moved to London, and lived modestly while continuing to write poetry.

After the sting of negativity from his other publication had worn off in 1842, Tennyson published two volumes of poetry, the first with his prior works and the other with all new poetry. This time, he did not need to worry about criticism! The books were regarded as masterpieces and Tennyson enjoyed overnight fame. Throughout the 1840s he continued to publish, and was consistently regarded as one of England’s most talented poets. In 1850 Tennyson published In Memoriam A.H.H. – one of his crowning achievements. Dedicated to Arthur Hallam, his friend from many years before, the poem (133 cantos long) is a meditation on great loss and the search for hope after experiencing such tragedy. Some of its lines are often quoted as Tennyson’s most famous stanzas, such as: “I hold it true, whate’er befall;/ I feel it when I sorrow most;/ ‘Tis better to have loved and lost,/ Than never to have loved at all.” 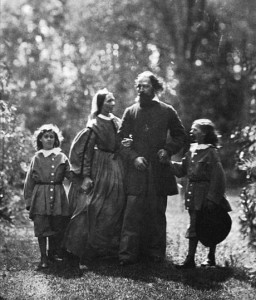 Tennyson with his wife and sons in the 1860s.

The year that In Memoriam was published held many interesting events for Tennyson, including his marriage in June to Emily Sellwood, a lady (who was 37 when they married) whom Tennyson had known since childhood. Also in 1850 Tennyson was given one of the biggest honors of his career, succeeding William Wordsworth as Poet Laureate (a position he held until his own death in 1892 – the longest tenure of any Poet Laureate before or since). Though he was, given the position, often forced to churn out works for notable British events, he also endured success in the next few decades of his life. In 1855 he wrote one of his most famous pieces, “The Charge of the Light Brigade.” In fact, this piece was so popular that later in Tennyson’s life Thomas Edison used somewhat new technology (wax cylinder recordings) to make some of his earliest recordings – of Tennyson reading his own poetry, this piece in particular. (Listen to it here, though please ignore the creepy animation of Tennyson’s face!) 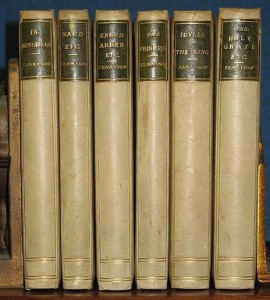 Our 6 volume holding of Tennyson’s Select Works, including Idylls of the King! Click the image to view.

Tennyson passed away at the age of 83 in 1892. He wrote his whole life, even until his last few years, and (as previously stated) held his royal position as Poet Laureate until his death. He authored dozens of poems, received awards, honors, and was even a favorite poet of Queen Victoria, whom he met on two occasions – the second of which was spent with the Queen explaining to Tennyson how comforted she was by In Memoriam after the death of her husband, Albert. Tennyson and his wife Emily had two sons, Hallam and Lionel, Hallam going on to take over his father’s Baronecy and publish the authorized biography on his father after Tennyson passed away. To this day, lines of Tennyson’s works are often well-known, if not always appropriately attributed to their rightful author. After all, how many of you knew that it was Tennyson who wrote “‘Tis better to have loved and lost, than never to have loved at all”?