The Bible is the most common English-language book in the world, so it would hardly seem like an ideal focus for rare book collectors. But the history and variety of Bibles make collecting them a diverting and challenging occupation—especially because one can often start a lovely collection without spending too much money. 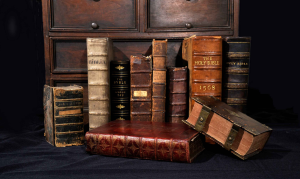 The sheer number of editions of the Bible can make it difficult to choose a scope for your collection. Many amateur collectors start out with their own family Bibles and simply collect other Bibles that catch their fancy. As you get more serious about building your Bible collection, it’s important to decide on a specific direction because the array of Bibles and editions is dizzyingly diverse; in their oft-cited bibliography, Frederick Moule and Thomas Herbert identified over 239 different editions of the English Bible…and those were all printed before the King James Version was first published in 1611.

A few common ways to focus a Bible collection:

With Bibles, “Old” Has a Whole New Meaning 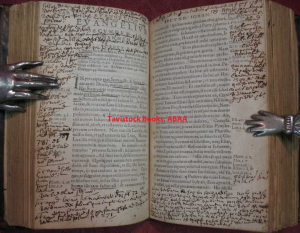 Our holding of a 1576 1st edition thus, New Testament. Someone had some thoughts on the writing!

In 1526, William Tyndale published the first complete translation of the New Testament. The book was deemed heretical, and almost all known copies were destroyed. The first English edition of the Old and New Testaments was published nine years later. Given that Bibles have been published for so many centuries, the word “old” takes on a whole new meaning. In the world of rare and antiquarian books, we usually think of a book that’s more than sixty years old as an antique. But a Bible isn’t really “old” until it’s been around for two full centuries.

Serious collectors generally consider Bibles published in Europe before 1700 the most collectible. And because Bibles were often used regularly, they’re not often in pristine (or even very good) condition. When you collect antiquarian Bibles, be prepared to embrace dog-eared copies filled with marginalia.That said, value isn’t always directly tied to age. Some 100-year-old Bibles are more valuable than others that are twice that age.

Collecting rare books of any sort requires discernment and research. The same holds true for Bibles. The volumes below are exceptional resources for the collector of Bibles: 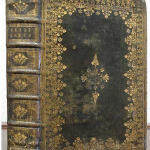 “Newly Translated out of Ye Original Tongues…” Are we sure about that? Check out our holding here!

Some reference works may actually even find their way into your collection. For example, Thomas Wilson’s Christian Dictionary is useful to the scholarly collector…and a new somewhat scarce title.

Children in the Woods

Illustrated Scripture History for the Improvement of Youth