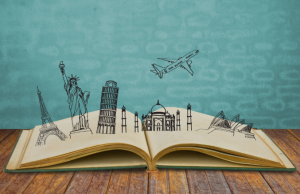 However, that being said, there is one thing that I cannot make up my mind on how I feel about it. The internet is partially responsible (in my own humble opinion) for making one particular genre of published book not quite as popular anymore.

Nowadays, just about anyone can and does post just about anything they want online. They went on a hike with their girlfriend and found a killer “secret” camping spot? Let’s tell the entire online world! (Not so “secret” anymore – so much for skinny dipping!) Did you travel to Versailles with your parents and take pictures of every single item of gold you saw? Post them to Facebook! Gone are the old days where someone went on adventures that others might never experience and went home to write colorful and descriptive tales about their travels. Travel writing had to be good enough, exciting enough and gripping enough to spend money to publish it – it had to appeal to the masses. Now don’t get me wrong – I love to travel and always want to write about my “adventures” – but I would rather write them down for a book than blog about them online! Perhaps it is old fashioned of me, but I think that this is a genre that we ought to bring back. 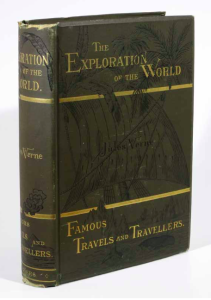 Travel Writing began as early as the 2nd century, when Pausanias wrote his Description of Greece and when Gerald of Wales wrote Journey Through Wales and Description of Wales (does it count as travel writing if you are reporting on your own hometown? Apparently so if it was written in 1191 and 1194). Travel writing was also a fairly common genre in medieval Arabic literature, with the travel journals of Ibn Jubayr (d. 1214) and Ibn Batutta (d. 1377) being the most well-known examples of this genre. In medieval China (the end of the Song Dynasty, in particular, 970 – 1279) travel literature was also widespread, and belonged to a genre the Chinese named “youji wenxue” or “travel record literature.”  Authors in medieval China wrote narratives, essays and prose that extensively focused on geographical and topographical information – authors like Fan Chengda and Xu Xiake are two of the most celebrated writers of this period’s genre – and their descriptions are valuable and amaze academics to this day! Even other nationalities were interested in describing Ancient and Medieval China… Venetian traveler Marco Polo, for example, wrote extensively about his travels and adventures when he reached China in 1271. His writings sparked other adventurers for centuries after his death in 1324 (be they authors or not, such as explorer Christopher Columbus).

Going further down the chronological ladder of history, in 1589 an English writer known for promoting the settlement of North America by the British, Richard Hakluyt (d. 1616) published his text The Principall Navigations, Voiages and Discoveries of the English Nation - a book (which ended up as 3 volumes) that detailed lands around the world and was based on as many eyewitness accounts as Hakluyt could find. His texts are widely accepted as the foundations of the “modern” travel literature genre.To this day, the London-based Hakluyt Society publishes scholarly editions of travels, adventures and voyages.

The 1700s is where things become, if I may interject my own personal feelings about it (which I never fail to do)… fun. In 18th century Britain, most of the most famous authors worked in the travel literature genre and once published would travel widely (imagine that) and give lectures about their books and their anecdotes. Captain James Cook’s diaries published in 1784, for example, were unbelievably well-known and were some of the most exciting publications to ever be made available to a literate public. Entering into the 1800s, Charles Darwin detailed the HMS Beagle’s journey and findings – a combination of travel writing, scientific study and natural history/geography. Not all authors of the period combined science with their studies – some interspersed humor with their anecdotes… authors like Mark Twain and (even our main man) Charles Dickens are good examples of other travel writers in the 1800s.

Our Richard Halliburton Archive, complete with letters about his daring voyage (which would be his last) aboard a Chinese Junk Ship attempting to cross the Pacific ocean. See it here>

Travel writing remained popular through the 20th century, with a higher emphasis on adventure tales, as travel was becoming more and more possible with the advent of different types of transportation – the car and the plane, in particular. Adventurers and authors like Richard Halliburton made their name by performing acts of bravery (and/or stupidity) and experiencing highly unlikely scenarios.

Humans have not lost the yen to travel and experience… so why has this type of narrative fallen a bit away from its original intent? Because times change! Though this is not a bad thing and who knows… perhaps one day I will end up writing my own travel blog… I still yearn for the days where one could read the “Royal Road to Romance” and see the adventure and the distant lands in our minds alone – without seeing a 3D movie about the same things! Who’s with me?