Warning: session_start() [function.session-start]: Cannot send session cache limiter - headers already sent (output started at /home/content/54/10457654/html/index.php:2) in /home/content/54/10457654/html/wp-content/plugins/alphaomega-captcha-anti-spam/alphaomega-captcha-and-anti-spam.php on line 13
 “It is better to learn wisdom late, than to never learn it at all” The Life of the Great Creator of Sherlock Holmes |

On the 7th of July, 1930, Arthur Conan Doyle died at age 71 from a heart attack. On this the 86th anniversary of his death, we’d like to look at this famous author, spiritualist & physician and his lifetime contribution to so many different fields!

Conan Doyle (as he is often called, though Conan Doyle is a combination of his middle and last names, as Conan is not a surname, as people often think!) was not born under auspicious circumstances. His father, Charles Altamont Doyle, was an alcoholic and when Arthur was only 5 years old he and his siblings were dispersed to live with family and friends across Edinburgh. A few years later the family moved back together and for numerous years lived in near-poverty. Luckily, Doyle had wealthy family to support him and to send him to Jesuit boarding school in England for seven years beginning when he was nine years old. Despite a difficult home life and upbringing, Doyle apparently struggled leaving home for school – as he was incredibly close with his mother (and would remain so throughout his life) and cherished the stories she would tell him during his childhood. It is even said that his favorite part of school was writing letters home to his mother, and telling stories to his schoolmates that she had once told him!

After leaving school as a young man, Doyle’s first act as an adult was to co-sign the committal papers for his father, who by that time was a long-sufferer of mental illness related to his drinking problem. After such, Doyle devoted his further studies, surprisingly, to a medical career (I say surprisingly as his family was one of artists) after being influenced by a boarder his mother took in for some extra cash. While at medical school, Doyle met two fellow students who would prove to become life-long friends, as well as literary stars – James Barrie (author of Peter Pan) and Robert Louis Stevenson. Another influential persona on the young Doyle was one of his Professors – a Dr. Joseph Bell. Dr. Bell, with his particular observations, attention and significant powers of logic and deduction would end up being Doyle’s inspiration for the character of Sherlock Holmes!

It was during his medical studies that Doyle first began to write short stories – the first few of which were published in both a smaller journal in Edinburgh and the London Society. It is said that with his publication in the larger UK magazine Doyle first realized that he could, possibly, make a living with his pen. He took off of his studies during his third year of medical school to act as a doctor on board an Arctic whaling boat – an experience that he loved (and kept detailed journals of) and sparked his wish for adventure. After returning to his studies and graduating, Doyle’s first job was to take another surgeon position on board a ship bound for Africa. He was less impressed by this position, however, and upon returning to England eventually opened up his own small practice in Portsmouth. During his time practicing, Doyle wrote short stories on the side and married a sister of one of his patients. He lived a relatively calm and normal life until March of 1886 when he began working on the novel that would propel him into fame and success as an author. 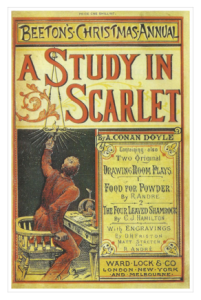 A Study in Scarlet was published in 1888 and immediately became a great success (though, surprisingly, Doyle was received more widely in America at first, than in the UK). Though this first work is well-remembered (as it introduced the world to the immortal characters of Dr. Watson & Sherlock Holmes), and Doyle continued writing other stories and novels. Sherlock became a household name and his stories began to be published in The Strand Magazine on a regular basis. In fact, after only five years of Sherlock titles, Doyle planned the death of this fictional hero and after The Final Problem was published in 1893 (where Sherlock and Moriarty plunged to their deaths at The Reichenbach Falls), over twenty thousand readers cancelled their subscriptions to the magazine!

Doyle’s next few years were troubled times for the author, as he struggled to maintain a readership with other stories and characters, took care of his wife recently diagnosed with tuberculosis, and dealt with the death of his (at this point) severely demented father. In the early 1900s, Doyle decided (more for the happiness of his bank account than his own literary merits) to bring back the character of Sherlock – first in The Hound of the Baskervilles (written as just a previously untold adventure of the famous Detective), and then with The Return of Sherlock Holmes in 1903 – once again serialized in The Strand Magazine. Sherlock Holmes was back, and as popular as ever.

Sherlock Holmes was kept alive despite many obstacles in Doyle’s life. He took care of his wife throughout her illness, raised their two children, wrote, tried (twice, in fact) to throw himself into politics, and began seeing a young woman he felt a deep connection with on the side (though it is thought he remained true to Louisa until her death in 1906). Doyle was also a very active person, participating in many sports and body building throughout his life. Doyle did not only write Sherlock Holmes periodicals, but also in this time wrote several plays and novels – though some popular (some not quite so popular) in contemporary circles are not what he is well-remembered for today. 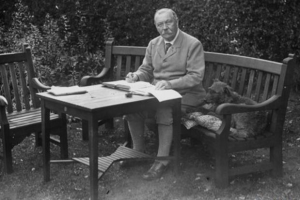 Ever an active participant in politics and wartime (he served as a surgeon in the Boer War some years earlier), Conan Doyle never ceased to look for ways to be of service to his country and his people. Fun Fact: After an attack on the British Navy at the outbreak of WWI where the military lost over a thousand lives in one day, Doyle wrote to the war office and recommended that they invent inflatable belts and inflatable “life boats” in order to save more lives of those at sea. Though many in the offices thought Doyle a nuisance (always interfering), at one point Winston Churchill himself wrote him to thank him for his ideas! As far as I’m concerned, being the one to come up with the idea for inflatable life jackets and life rafts absolutely earns you respect.

One part of Doyle’s history that many like to focus on is his interest in the paranormal and the occult sciences. Having always been interested in certain types of phenomena (even his second published work was a strange occult work of fiction about the afterlife of three Buddhist monks), he became even more so after witnessing the death of his son in the war. His interest in spiritualism (which his wife eventually also shared), led him to believe in anything paranormal – such as the Cottingley fairies (the two girls who posed with fairy cutouts and accidentally started a nationwide interest in the belief of fairies). Though when the need for money rose once again Doyle was able to pen out more Sherlock Holmes tales, most of his writing in his later life focused on spiritualism and psychic pursuits. 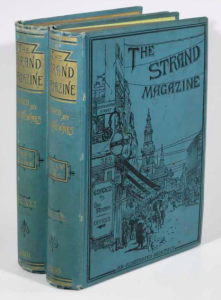 A Collection of Strand Magazine from 1900 to 1901 with Arhur Conan Doyle articles “A Glimpse of the Army” and “Strange Studies from Life” as well as an interview with Doyle – “A British Commando.” See more here>

Doyle passed away from angina and heart-related difficulties in July of 1930. His last words were whispered to his second wife, “You are wonderful.” This great man created one of the most well-known literary characters to this day and lived a full-life, constantly chasing his passions, whether they be literary, political, or spiritual.