Ahh, book fair season is upon us once more: when booksellers of every stripe take to the skies and highways of America in search of fresh resources and temporary bibliophilic nesting grounds. It’s one of the book trade’s enduring mysteries, and a sight to behold. Drawn by forces scientists have not yet managed to explain — collective memory, blind professional instinct, shifts in the earth’s magnetic field, or merely the prospect of good food and drink with colleagues — flocks of booksellers converge for weekends at a time in cities and towns across the country, clogging bar stools and sharing vast quantities of hugs, trade knowledge and alcohol. Here, they perform the time-honored ritual of artfully displaying their brightest finds for local bibliophiles and librarians to admire, in the hopes of attracting paying customers and thus ensuring continued survival. It’s an improbable business model in the best of times, and the second decade of the 21 st century is not, alas, the best of times. It’s hard to know these days if exhibiting at book fairs is increasingly an exercise in magical thinking — an evolutionary failure to adapt, with portents of incipient dodo-ism – or an increasingly necessary means of making available the real, tactile wonder of books (and ephemera, etc.) and advocating for the pleasures of owning them. 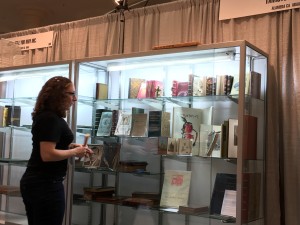 In a bizarre reversal, Tavistock Books kicked off the Seattle Antiquarian Book Fair in style and with a degree of hope, toasting a decent showing at the Sacramento fair and our just-released catalogue with a glass of champagne in the American Express lounge at SFO. Contrary to last year’s comedy of bad luck, no van wrecks preceded our departure, and, though we didn’t know it yet, no luggage would be lost en route. Our books, along with those of a whopping 14 other California booksellers, were already waiting at the venue, thanks to the combined might and keen packing skills of road warriors Brad Johnson (The Book Shop) and Jesse Rossa (Triolet Books). If the décor of the Amex lounge – typical neutral airport fare with an upscale twist, backed by a wall-length display behind the bar composed of old 1940s-style suitcases, radios and cheap “antique” books (of the World Book Encyclopedia variety), its warm shades of red and yellow the only color in the place – hinted at an ominous book nostalgia underway around us, we chose to disregard it. Besides, we’d already begun drinking before noon.

As usual, Louis Collins was running a tip-top operation once we got to Seattle, complete with roving bands of equipment crews and free coffee and pastries for exhibitors. The venue was hot, as is always the case, but a brisk pre-fair business left many dealers looking pleased, if glistening. In yet another odd reversal, this time I found myself offering occasional tips to fellow assistant and booth-mate Jeremy Reidel, of Books Tell You Why, doing an admirable job of setting up his first solo booth display. The inevitable rain the following day did nothing to dispel the crowds of fairgoers, given an extra boost by the Ephemera Society, and even Sunday brought a significant number of people into the fair. And, through it all, strangely enough, the Tavistock booth stayed relatively busy. We weren’t selling things hand over fist, to be sure, but we kept selling things: to collectors, institutions, old customers, fellow booksellers, all day Saturday and, to a lesser extent, on Sunday, too. All in all, it was a frankly surreal turn of events. Had the good ship Tavistock finally broken its bad luck streak?

To some extent, astonishing though it may be to admit: yes. Unlike many at the fair, it seems, we had good sales this time around, or at least good enough to cover our expenses and cost of goods and make a little profit, to boot. The buying was decent, and we walked away from a pre-fair Sunday morning trip to Taylor Bowie’s shop loaded with armfuls of great new cookery material. Not to mention this lovely eye-catching poster, scouted by Vic in the first few minutes of set-up and soon to be catalogued (contact us for details if interested): 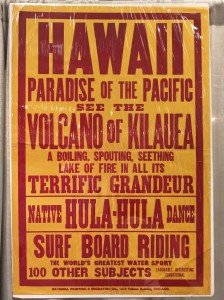 I even found a book for myself . . . from our own booth, much to Vic’s endless delight, which I eventually bought after hiding it from the customers all morning. As Vic has been fond of telling people, however, we probably made somewhere around $1.38 an hour – and that’s not including potential missed sales from the shop being closed, the costs of repairing at least one book that didn’t weather the journey and extra handling, etc. So did we really come out ahead, in the end? 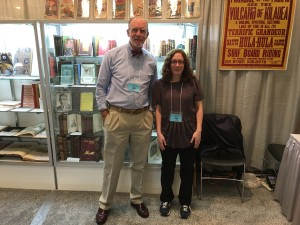 I’d like to think there’s more to it than just number-crunching. That, in some incalculable way, discussing Stephen Greenblatt with a long-time Seattle-area collector branching into Renaissance studies, or helping a new customer find just the right early nursing books for her research, or getting a whirlwind lesson in medieval paleography from Kait Manning (Philip Pirages) and being schooled in maritime journals by Greg Gibson (Ten Pound Island Book Co.), or simply being part of a physical, non-virtual book presence in the life of a community once a year, amounts to something. It’s too damn fun not to.