We recently wrote a short and sweet blog post on “Why You Should Be Collecting Antiquarian Cookery.” Now, we do enjoy getting Cookery items in and we do have quite a bit of knowledge around them, but technically speaking, cookery is not one of our ‘specialties’. However… Nursing is. We often have customers exclaim surprise at our little-known specialty, followed by a slightly confused look as to why we might carry such things. You yourself might be wondering how many nurses are also antiquarian book collectors. We must confess that we do not know those numbers. (However, if you know those numbers, please feel free to share.) So for this week’s blog post we thought we would share why you don’t have to be a nurse to collect antiquarian nursing material!

Before you remind us, yes, Vic began collecting nursing material because his wife, Ellen, was a head nurse! So yes, occasionally there are nurses involved. Just thought we would get that over with before we get any “Wait up, we know that Ellen was involved in that field…” emails. However, Vic knowingly went into the field, as he realized that there weren’t many out there specializing particularly in nursing material over a more generalized medical genre. 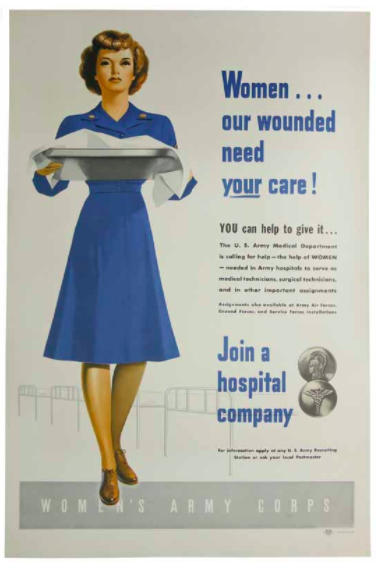 Although the U.S. Army Medical Department was one of the slowest to integrate women, when over 5,000 of its combat-ready men — including many trained technicians and orderlies — were forced to transfer to the Infantry in early 1944, the department began a major push to recruit women to fill the positions. The Female Medical Technician campaign, as pictured here, was hugely successful. See this Fine condition WWII poster here.

Nursing material tells us about just as much of history as other items in the medical field. Nurses were often called upon to step in and help in times of war and devastation, and, in some instances, were in even higher demand than doctors. Antiquarian nursing material often teaches the reader (albeit briefly) the best ways to care for wounds, different illness, and even mental “defects”. They are particularly interesting as, despite what western medicine looks like today, many antiquarian nursing items were published before the heavy use of medication. Nursing materials can teach how to care to the sick without Advil – which many would argue is more important than knowing how to hand over a pill!

Check out this 1804 1st US edition of FRIENDLY CAUTIONS To The HEADS Of FAMILIES And OTHERS, Very Necessary to be Observed in Order to PERSERVE HEALTH And LONG LIFE: with Ample Directions to NURSES WHO ATTEND The SICK” – a manual for nurses from over two centuries ago! See it here.

Antiquarian nursing items are therefore of interest to any of those looking to see cultural and scientific differences in levels and quality of medical care over the past two hundred years. It is also interesting to use the materials to see how nurses were trained, what they were trained in, and what they were called on to do. Now if you don’t find that interesting, then we don’t know what else to tell you! 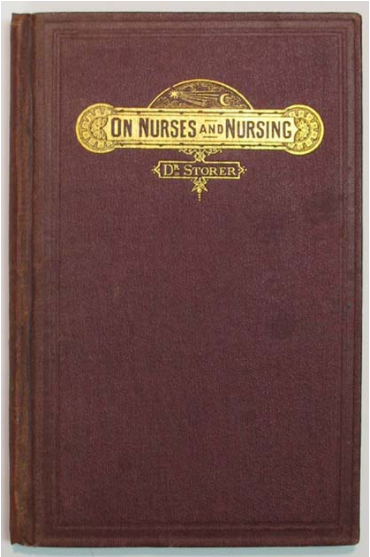 Check out this 1868 1st edition of “On Nurses and Nursing by Dr. Horatio Storer – a leading physician in the 19th century who, in 1857, started the “physicians’ crusade against abortion” both in Massachusetts and nationally, and persuaded the American Medical Association to form a Committee on Criminal Abortion. The Committee Report was presented at the AMA meeting in Louisville, Kentucky in 1859 and accepted by the Association. Woah! Check it out here.