We all know it, or at least part of it. You either learned it in school or you’ve heard it around Halloween-time… it doesn’t really matter how you know it, you just do. And no matter how you feel about it (good, bad, indifferent) you must admit… it’s a fan favorite the world over.

Yes, ladies and gentlemen, we’re just talking about a poem. On this date 173 years ago, Edgar Allan Poe’s The Raven was first published. Let’s look at what this poem was and how it affected both the literary world and Poe’s life.

At the time when The Raven was published, Poe’s life held startlingly similar circumstances to the protagonist of his poem. Poe’s young wife, Virginia, was slowly succumbing to the fate of sufferers of tuberculosis. Poe knew well what would happen – having lost much of his family to the disease. In the poem, the protagonist agonizes over a lost love, and even asks the raven whether there is any “balm of Gilead” that could ease his suffering. He is rejected by the raven (you know, in the way where it is a raven rejecting you with the only word he seems to have memorized) and laments on his seemingly wasted life (as one does when a bird rejects you).

A fact we truly enjoy bringing up to all Poe fans at length is that part of his inspiration for this poem came from… none other than Charles Dickens! I mean, Poe may not have directly admitted this fact, but he did publish a review on Barnaby Rudge and mentioned the fact that the raven in the novel, “intensely amusing as it is, might have been made more than we now see it… Its croakings might have been prophetically heard in the course of the drama.” How’s that for inspiration?!

Alright – well, enough fun facts about the poem itself. Let’s focus a bit on what might have been happening on this day so many years ago. The truth is that The Raven turned Poe into an instant celebrity – it was well received from the beginning, and prompted publishing house Wiley and Putnam to publish a book of Poe’s prose in June of that year, and a book of his poetry in November of 1845. Though the poem brought Poe very little financial success ($9-$15 is what Poe received for it at the start), the fact that it prompted the publication of his first book in five years was obviously a boon. Plus he had children following him in the streets flapping their arms and cawing until he would turn around and screech “Nevermore!” at them so that they would run away squealing. I mean, how much happiness could one man take? 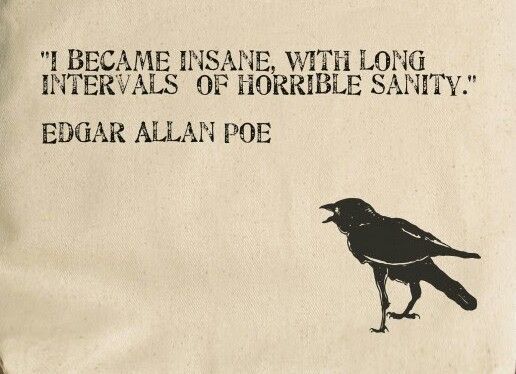 So I know I promised that we would talk about how its writing influenced literature, but in all truthfulness, I have yet to see an article reflect at length on such an announcement. It drew an audience from all over the United States and abroad in England and Europe, where Poe became a household name. It sparked fear in the hearts of many – watching a depressed protagonist slowly lose his mind and be both the conveyor and interpreter of an ominous message delivered by an irritating feathered friend will do that to you. It was revered, accepted, and even sparked apathy and distaste by both civilians and other writers – much the same as every other piece of the written word that gets sent out to be eaten by us literary wolves. So what is it that The Raven had that was so singular? 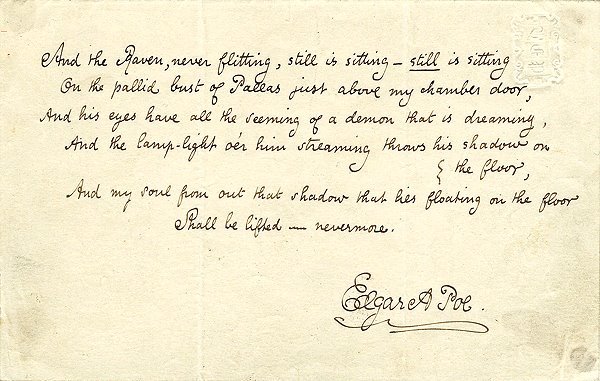 It was written by a man with the prettiest handwriting I’ve ever seen, of course.