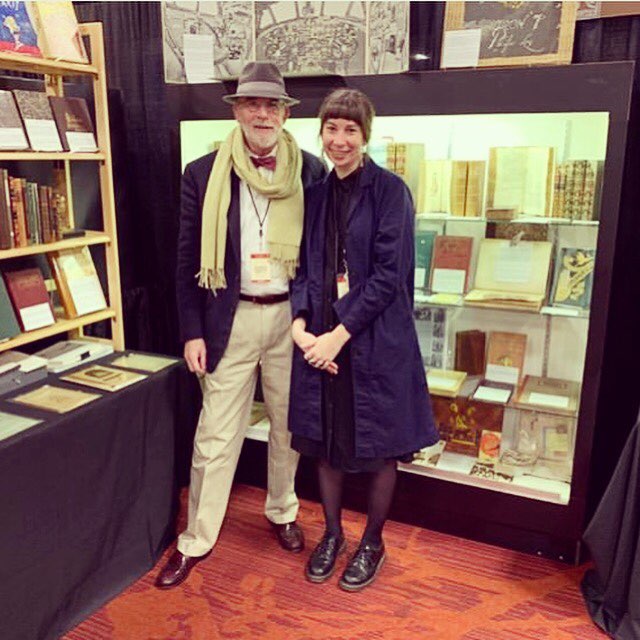 What were you most excited about for the Oakland ABAA fair?

Samm: Having everyone in town on our “turf” to invite to the shop and seeing all the international dealers!

Vic: The ending…?  Seriously, it had been a long 10 days for us, what with the Pasadena fair the weekend prior, and boy, by the end of Sunday, my dogs were barkin’, let me tell you!

What was the theme of this year’s California ABAA fair and how did it present itself at the fair?

Samm: The theme of this years fair was OZ. There was a large collection of rare Oz items in the room. A lot of dealers also brought some things from their Oz collections that were dispersed around peoples booths… there was a touch of Oz or Baum almost everywhere if you looked hard enough!

Vic: The OZ theme was very well presented, though we’re sorry to say the OZ things we brought, we also brought back to the shop! But nevertheless, it was an exciting theme, and I saw some wonderful material in the genre throughout the room. 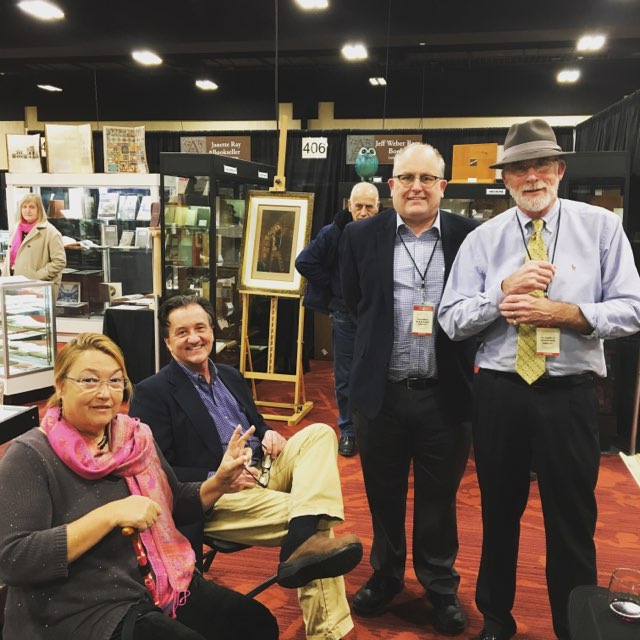 Were there any special events you two attended that you’d like to make note of for us?

Samm: We did not make the poker benefit as we were exhausted.  I personally did not make the talk put on by the Womens Initiative as I was finally taking time to browse the booths.  I snuck in for a brief minute to see Vic’s talk and take some photos.  He had a large turn out and looked super comfortable up on stage.  Some people who attended his seminar even came and browsed the booth and told him that they very much enjoyed his talk.

Vic: One that perhaps deserved more press I’d like to mention here: the Northern California Chapter’s “Young Book Collector’s Prize.”  The award was won by a nice young man from La Jolla, Matthew Wills.  His collection, “Anti-Confucian Propaganda in Mao’s China”, was on display in the room.  This award, and the many young people who submitted entries, indicates to me that book collecting is alive & well  with the next generation.

Vic, did you speak at this year’s fair?

Vic: Samm’s right, I did, though it was my ’Swan’ song so to speak, as Laurelle Swan, Swan’s Fine Books, will take over for me come 2021.  Yes, pun intended!

How was the attendance at the Oakland fair?

Samm: The turn out was the best on Saturday I think.  The rain was a bit lighter.  Friday was a dreary day, but people still came out.  Overall, a good turn out I thought, but I don’t have another ABAA fair to compare too!

Vic: Both were of modest proportions for us in Oakland, though I thought the promoter did well getting people through the door.  But we had few sales to the general public, so, for whatever reason, the material we brought failed to resonate with them.  You win some, you lose some.

Which fair was better overall for Tavistock Books – the Oakland fair or Pasadena fair – in terms of buying, selling and fun?

Samm: In terms of buying I would say Pasadena. In terms of selling and fun I would say Oakland.  The fun and selling go hand in hand I think as we had our “Shin-dig” which was great and we sold some items at that too!

Vic: This a tough call…  our energy levels were higher in Pasadena, and I didn’t have ABAA responsibilities while in Pasadena [in Oakland, I had a Board of Governors meeting, as well as the Association’s Annual meeting].  That said, it’s always a pleasure to see colleagues, and perhaps share a meal.  While in Oakland, groups of us did get out to both Wood Tavern & Chez Panisse, two of the top East Bay restaurants.  And yes, Samm is correct, we bought way more in Pasadena [for details, watch our forthcoming Wednesday morning lists!]. 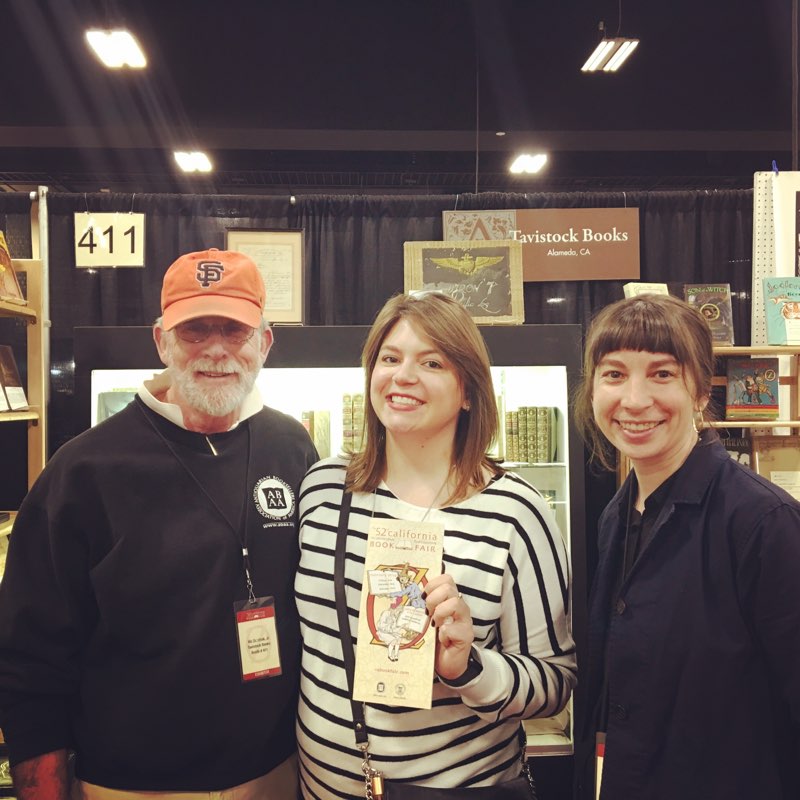 Is the Oakland fair still as much of a draw as it has been since the year they moved it from San Francisco?

Vic: Here in California, to be honest, our biggest attendance detriment is the proximity of the New York book fair [early March].  The ABAA leadership is acutely aware of this situation, and hopes, in future years, to introduce more of a calendar separation between the two events.

How did your pre-fair Tavistock Books shindig go?

Vic: Given it’s last minute nature, we think it went well!  We did have a number of colleagues say they’d already had commitments, and therefore weren’t able to make it. Samm & I agreed to do it again in 2021, and ‘get the word out’ much earlier that year.

Samm: It was fun!  We had a good turn out – maybe 15 people or so filtering in and out! Sold some items! People drank our drinks and ate snacks and talked books!  What could be better?

What did you both learn at this year’s fair that you might not have known before it?

Samm: I suppose I learned that you can never truly know what will sell. You don’t know what booksellers will want, which collectors will be there etc. It can be a guessing game. But having a website to shop and storefront helps. So you may not make a sale at the fair itself but you can offer those other options to make a sale at a later date!

Vic: I’ve done enough of these fairs over the last 30 years that the one thing I’ve learned is that no one fair is like any other!  It’s like rolling dice, you just hope a 7 comes up.

And last but not least… Vic, what is different about being president of the ABAA at an ABAA fair?

Vic: Interesting question Ms P, for this is the first ABAA fair at which I’ve exhibited since becoming the Association’s President.  What I found is that knowing I’m the President, ABAA colleagues came over to chat about diver Association matters, which is a good thing.  To properly do my job as President, I need to know how members stand on different issues.  For those that took the time to do so, I thank you. 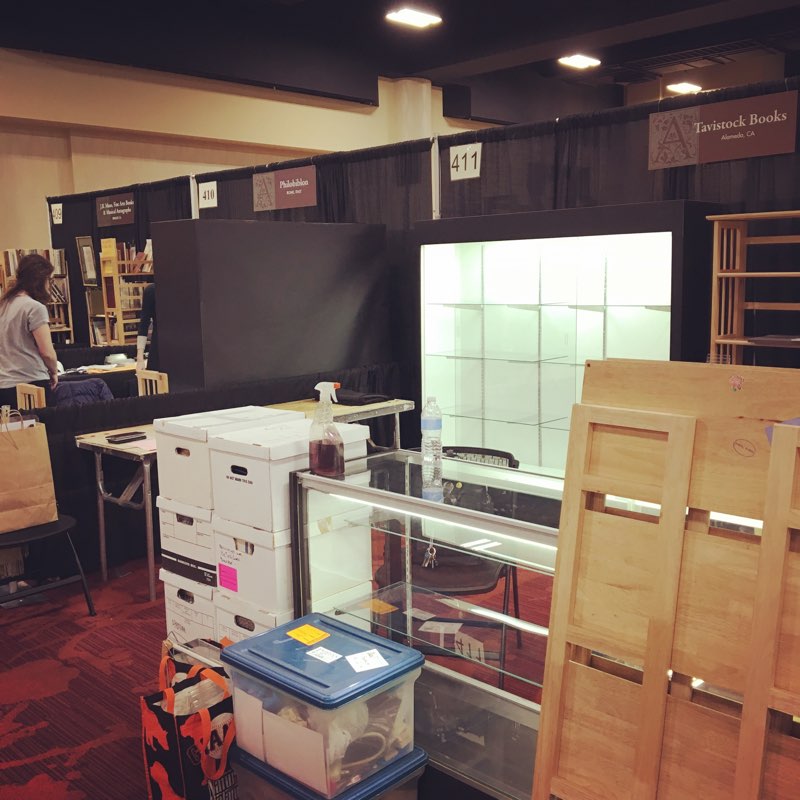 And that’s a wrap, ladies and gentlemen!