Charles Dickens, in many ways, stands for Victorianism; indeed it’s impossible to think of the era without him, and he defined the period in many ways. Yet we cannot assume that Dickens represents his contemporaries in all things. His own upbringing shaped his sense of social justice in ways that did not always reflect the common views of the era. One such topic on which Dickens thought differently than his contemporaries was that of prostitution. Dickens firmly believed that women could (and should want to) reform. Not everyone agreed—including a few women who were prostitutes themselves! 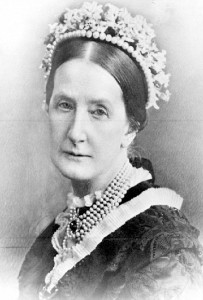 In May 1846, Angela Burdett-Coutts approached Dickens about starting a home for the redemption of prostitutes. Coutts came into her wealth unexpectedly and resolved to use it for the common good. She’d gotten Dickens’ council before on her Ragged School and believed that they had similar perspectives. Coutts, the daughter of radical MP Sir Frances Burdett, had been raised to take a pragmatic approach to philanthropy. She was liberal with others, but held herself to high standards of performance—much like Dickens.

Dickens did not immediately embrace the idea of an “asylum” for prostitutes, and he initially tried to dissuade Coutts from the idea. But eventually he warmed up to the concept and jumped directly into logistical planning. In a letter to Coutts on May 23, 1846, Dickens discusses the layout of the house, suggesting that the interior be divided into two portions, with one for new residents on probation, and another for residents who had already proven their capacity for and willingness to reform. He found Urania Cottage, in Lime Grove, that same month. The home was “retired, but cheerful,” he said, and the taxes were low.

Dickens was quite emphatic that the women not be constantly reminded of their sin, arguing that “she is degraded and fallen, but not lost, having the shelter; and that the means of Return to Happiness.” He also proposed the use of Captain Maconnochi’s Mark System, which rewarded marks for positive behaviors and deducted them for inappropriate ones. Dickens noted that “the goal of this institution should be ‘the formation of habits of firmness and self-restraint.’” 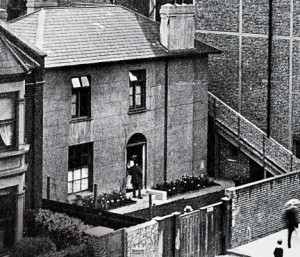 Coutts agreed with Dickens on all these counts, though the two could not reach consensus on whether the women should be given colorful garments—Coutts believed that all aspects of the women’s appearance should be somber and reserved, while Dickens didn’t see the damage that could be caused by cheerfully colored dresses. Despite this tiny matter, they moved forward with the project, planning gardens and determining that there should be a piano for the ladies in the parlor. The idea of entertainments for fallen women shocked the literary community, and Dickens responded by satirically announcing that there would actually be a piano for every woman in her quarters! 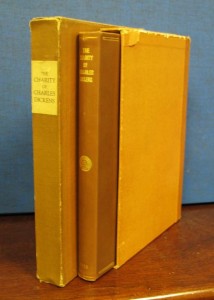 Published by the Bibliophile Society, this edition of ‘The Charity of Charles Dickens’ was limited to only 425 copies. It details his involvement with Urania Cottage.

Meanwhile the issue of prostitution seemed to worsen daily. That summer, famine struck Ireland, sparking migration to England and a new wave of women entering the oldest profession. Numerous other reformatories sprung up. However, the vast majority were harsh places, where women were treated stringently and often reminded of their “fallen” status. Many believed that these women would only be “reformed” through rigorous discipline. Coutts and Dickens on the other hand, thought that these women could be rehabilitated, and they ambitiously predicted a full return to society…though not in England. After the women were deemed ready, they would be sent off to the Colonies to find domestic work and, with any luck, find husbands who had no inkling of their sordid past.

In 1849, Dickens wrote “An Appeal to Fallen Women.” Distributed in the prisons, the pamphlet was intended to recruit women to be residents. It worked to some extent, and Urania Cottage (known euphemistically as a “Home for Homeless Women”) was rarely short on prospective inmates, whom Dickens often interviewed himself. Indeed, he remained incredibly active in the daily operations of Urania Cottage. He closely supervised the staff and monitored finances.

Coutts and Dickens were generally pleased with their work. In 1853, Dickens wrote positively of the home in Household Words: “Of these fifty-six cases, seven went away by their own desire during their probation; ten were sent away for misconduct in the home; seven ran away; three migrated and relapsed on the passage out; thirty (of whom seven are now married) on their arrival to Australia or elsewhere, entered into good service, acquired a good character and have done so well every since to establish a strong prepossession in favor of others sent out from the same quarter.”

A Mortifying Letter to the The Times

One such woman who was sent away was Sesina Bullard, whom Dickens called “the most deceitful minx in this town—I never saw such a draggled piece of fringe on the skirts of all that is bad. She would corrupt a Nunnery in a fortnight.” Bullard’s friend Isabella Gordon was not much better. After fabricating a story about a house matron, Gordon was given a half-crown and directions to another charity. While awaiting her punishment, Gordon reportedly sashayed up the stairs with her skirts up, mocking the gentility of house staff and Coutts herself. Still another woman, Jemima Hiscock, broke into the beer cellar and got herself “dead drunk.” 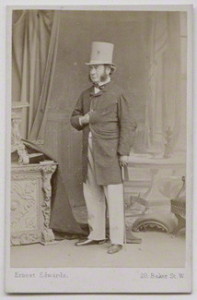 By February 1858, there were approximately 80,000 sex workers in London alone, and prostitution qualified as a pandemic problem. Always on the lookout for women to help, Coutts was excited to read a column in The Times that month. It was penned by an “Unfortunate” who had become a prostitute. Coutts wanted the woman’s name, so Dickens wrote to Times editor John Thadeus Delane to solicit the letter writer’s identity and explain his benevolent motive. Delane clearly thought highly of the letter writer, exclaiming, “What an admirable letter it was! Except Currer Bell [Charlotte Bronte] and Mrs. Gaskell, I know of no woman who could have sustained such a tone through nearly two columns.”

Neither Dickens nor Coutts, unfortunately, had bothered to read all the way to the end of those two columns. The child of drunks, the author had entered the profession of her own accord at the age of fifteen. She made a good living, educating herself and sending her brothers to apprenticeships. She paid her debts and even had enough income to be “charitable to her fellow-creatures.” Often such a tale of success would end with a sudden fall, reinforcing popular notions that prostitution could never really pay. In this case, however, the author takes a different tack: she castigates the public for looking down on her. “You, the pious, the moral, the respectable, as you call yourselves,” she writes, “Why stand you on your eminence shouting that we should be ashamed of ourselves? What have we to be ashamed of, we who know not what shame is?”

The letter writer differentiated between “born prostitutes” like she was, and had entered the profession of their own volition, and “poor women toiling on starvation wages, while penury, misery, and famine clutch them by the throat and say ‘Render up your body or die.’” The author went on to blame immigrants for London’s prostitution epidemic, pointing out the growing number of French prostitutes on the street. She also reminds readers that while prostitution is itself a social ill, its antecedents rest in other social ills: “If I am a hideous cancer in society, are not the causes of the disease to be sought in the rottenness of the carcass?”

When Coutts finally read the end of the column, she was absolutely mortified. Dickens again wrote to Delane on Coutts’ behalf, admitting that Coutts is “immensely staggered and discomfited by the latter part [of the column], and is even troubled by its being seen by the people in her household. Therefore I think the writer should had best remain unknown to her.” Dickens himself suspected that Delane or another Times writer had actually penned the letter, and he wasn’t alone. The Times had to publish a note that the letter was not a “cunningly executed literary imposture,” and Delane continued to insist that the letter was authentic.

The scandal of Dickens’ affair with Ellen Tiernan and the subsequent estrangement between Dickens and his family caused a rift between Coutts and Dickens. Like Elizabeth Gaskell and William Makepeace Thackeray, Coutts thought that such public display of one’s personal problems was just as horrible as the separation itself. Coutts stopped funding Urania Cottage, and it was finally closed down in 1862.