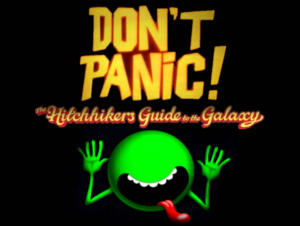 As a child, I was required to listen to many different things. Classical music, for one. Teachers getting annoyed with me for asking too many questions, for another. And… The Hitchhiker’s Guide to the Galaxy quotes, for a third. For that last particular factor I have my father to thank. (Though actually, now that I think about it, he seems to have had a major hand in all three of those particular life events… but I digress.)

Douglas Adams may be best remembered for his humorous saga The Hitchhiker’s Guide to the Galaxy, a “trilogy” of five books which sold over 15 million copies during the author’s lifetime, but he was much more than a simple humorist (or was he?). He was a script writer, a lover of Doctor Who (he wrote and edited for the show on more than one occasion), and a self-proclaimed radical atheist (as in… if you asked him if he meant agnostic he may have attacked you with a wet towel). By adulthood Adams stood at 6’5″- but his stature was far from the only thing that set him apart from the crowd!

Adams was born in March of 1952 in Cambridge, England. Though his family only lived there a few short months after his birth, where he then moved a couple times throughout his childhood – first to East London and then, once his parents divorced, to Brentwood – a small city in Essex. By the time the young Adams reached age 12 he already stood at (nearly) his full height – his early growth spurt only rivaled by his short stories, poems & essays as for what was most interesting about him. He was a published author by the time he was 10 years old, with his earliest writing found in school publications and local boys’ comics. Adams continued to write sketches and humor throughout his time at school, though, in all other aspects, his University education was otherwise… predictable.

After University (St. John’s College, Cambridge), Adams moved to London with dreams of becoming a writer for television and radio. Amusingly enough (pun intended), his breakthrough came with his contributions to Monty Python – he not only helped write sketches for the show, but even made special appearances a couple of times… and was only one of two people who ever received writing credit for the show outside of the original cast members. Though he made this early success with the Monty Python gang, Adams then hit a wall in regards to his writing. For a time he was unable to publish any of his work (due to a lack of interest by fools) and performed odd jobs (even as a bodyguard and a chicken shed cleaner… apparently) before moving home to live with his mother in 1976. (All great adult men live with their mothers at some point… right?) 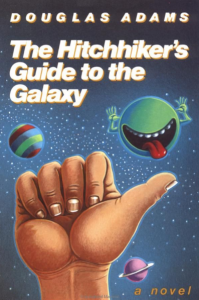 This gloomy state of affairs did not last long for Adams, however, as when he and radio producer Simon Brett pitched the idea of The Hitchhiker’s Guide to the Galaxy (an idea that came to Adams while he was lying drunk in an Austrian field…. I couldn’t make this up if I tried) to BBC Radio in 1977 it was immediately taken up by the station. The series began being broadcast on the UK’s BBC Radio 4 in March and April of 1978. The success of the initial series led to a special Christmas episode the same year and a second series broadcast in early 1980. Despite a difficulty in writing to appease deadlines (he is famously quoted with “I love deadlines. I love the whooshing noise they make as they go by”), Adams published five novels in the Hitchhiker’s series, from 1979 to 1992. The Hitchhiker’s Guide to the Galaxy was the beginning of a cult phenomenon – comic books, computer games, spin-offs and movies have just been the start of the HHGG following!

Towards the end of his (painfully short) life, Adams authored another short series (just two books) on Dirk Gently and his life – a story Adams himself described as “a kind of ghost-horror-detective-time-travel-romantic-comedy-epic, mainly concerned with mud, music and quantum mechanics” that Adams loosely based on characters he used previously in his contributions to Doctor Who. Also later in life, Adams became an environmental activist, campaigning for the sake of various endangered species. He took his environmentalist acts extremely seriously, like in 1994 when he raised over £100,000 by traveling to and climbing Mount Kilimanjaro in a rhino suit for a British charity called Save the Rhino International.

Adams died suddenly on May 11th, 2001 from a heart attack after working out at a private gym near his home in Southern California (and people ask why I don’t exercise…). However, don’t fret (at least, not on your left-handed guitar, of which Adams had a collection of 24 when he passed away) – May 25 celebrates international “Towel Day” – a day where fans of The Hitchhiker’s Guide to the Galaxy openly carry towels around with them… as “any man who can hitch the length and breadth of the galaxy, rough it, slum it, struggle against terrible odds, win through, and still knows where his towel is, is clearly a man to be reckoned with.”

… Please excuse me while I go look for mine! 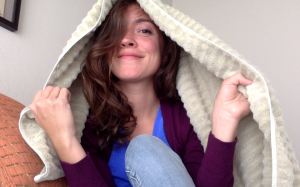 Don’t panic… I found it.