Murder on the Orient Express. And Then There Were None. Murder at the Vicarage. The Body in the Library. A Murder is Announced. By the Pricking of My Thumbs. The Murder of Roger Ackroyd. 4.50 From Paddington. What do all of these titles have in common? Besides great plots, inventive narratives and extremely competent character development? They were all written by the “Queen of Crime”, Dame Agatha Christie. Christie is said to be the best-selling novelist of all time (according to the Guinness Book of World Records) with over 2 billion copies of her novels sold and having been translated into 103 different languages. Reputedly, Christie is the third most popular author of all time, with regard to sales figures, finishing behind just William Shakespeare and the Bible. Furthermore, Christie’s stage-play “The Mousetrap” is the longest running (straight-play) stage production of all time, having opened in London in November 1952 and still being performed, with over 25,000 performances to date. How did this lady crime-novelist get to be so popular? How did her (seemingly average) life influence her writing? And perhaps the most important question of all… Who Killed Roger Ackroyd?!? (Just kidding, no spoiler alerts necessary). Stay tuned. 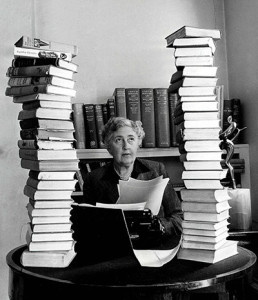 The “Queen of Crime” herself!

Agatha Christie as a child, undated.

“One of the luckiest things that can happen to you in life is to have a happy childhood. I had a very happy childhood.” Christie was born Agatha Mary Clarissa Miller in 1890 in Torquay, Devon. She was the third child (of three), but spent much of her childhood alone with her parents, as her two siblings were significantly older than she. The author taught herself how to read by the age of 5, though her mother thought to keep Agatha home and untutored until age 8. Christie’s imagination flourished as a child and she spent many years inventing imaginary friends, writing poetry, and reading everything from exciting American thrillers to Little Women.

Christie’s life dramatically changed at the age of 11, with the death of her father and the looming financial hardships endured by her and her mother. Nevertheless, Christie was then educated in Paris for five years, and on returning to England traveled around with her mother. A most impressionable trip for the author occurred in 1910 to Cairo (a popular and affordable destination in the early 20th century for Britons) where Christie unsuccessfully entertained the idea of finding a husband. However, on the return to England the young author attended a party during which she did find a handsome and charming husband, and later in life used her experiences in Cairo as inspiration for some of her works.

Agatha Miller married Archibald Christie on Christmas Eve, 1914. The beginning of the marriage was slightly erratic, as Christie had joined the Air Service at the start of World War I and was in and out of the country until 1918. Agatha was also very involved with the war effort, as a member of the Voluntary Aid Detachment tending to wounded soldiers in a hospital in Torquay. A very important turning point in the author’s life was when she qualified as an Apothecaries’ Assistant in 1917, as her stretch at the dispensary helping shape her interest in medicine, which assisted her decades later when she began developing an intense knowledge of poisons. In 1920 her first book was published, The Mysterious Affair at Styles, which introduced to her public the now famous detective, Hercule Poirot. Christie was contracted to produce five more books, and thus began her prolific writing career.

Her marriage with Archie Christie was not a happy one, as Christie herself stated that her relationship with her husband began on the “excitement of the stranger” which wore off soon enough. In 1926 Archie announced his desire for a divorce, as he had been having an affair with a family friend, Nancy Neele, and had fallen in love with her. The author’s life was already in a tumultuous emotional state, with the recent death of her mother and a young baby in her care. Though the circumstances behind the Christies’ fight and subsequent events are iffy (at best), what is known is that after her car was found abandoned near Guildford in Surrey over a thousand police officers and 15,000 volunteers scoured the countryside for 10 days looking for the lost author. After a tip was called in, the police discovered Christie at a hotel in Harrogate, Yorkshire, registered as a Mrs. Theresa Neele (the family name of her husband’s mistress not overlooked) from Cape Town, South Africa. Though many speculated that Christie’s disappearance was part of a publicity stunt to embarrass her husband, the only official word of the situation was that the stress of the author’s circumstances sent her into an emotionally unbalanced state of temporary amnesia, forgetting her identity and associations. Though we may never know the truth, as Christie remained extremely tight-lipped about the incident for the rest of her life, the author does seem to have used her situation and failed marriage as inspiration for her March 1934 novel (not-crime fiction) Unfinished Portrait, where the protagonist (a suicidal woman) possesses qualities eerily similar to the author herself. 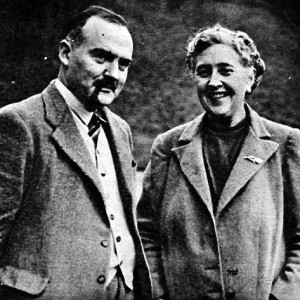 Christie and Max Malloway. “An archaeologist is the best husband a woman can have. The older she gets, the more interested he is in her.”    -Agatha Christie

Christie married a slightly younger archeologist named Max Mallowan in 1930, and enjoyed a happy and exciting married life with him until her death in 1976 (during which she was promoted to Dame Agatha Christie and her husband knighted for his archeological works – a couple honored in their own rights). She accompanied her husband on many of his archeological travels and excavations, and even assisted at the dig sites in the afternoons after writing a few chapters of her novels in the morning. It is on these travels and inspired by these travels that Christie wrote some of her most exciting literature.

The onset of World War II saw important influences from Christie’s life once again transposed into her writing. For instance, the author once more joined the war effort and put her apothecary/dispensary skills to good use. She began work at a pharmacy at University College Hospital in London, and her consequent knowledge of poisons would be used in some of her post-war novels. In particular, her “offing” several characters in The Pale Horse by the use of thallium poisoning supposedly helped real baffled doctors figure out what was causing their patients to suffer.

Christie continued to write until quite a late age, passing away from natural causes on January 12th, 1976 at the age of 85. She lived long enough to attend the premiere of the 1974 film version of Murder on the Orient Express (her last official public outing), where she deemed the adaptation good overall, despite the fact that Poirot’s mustache was not up to her luxurious expectations!

Unlike many other authors, Christie never suffered a period of waning popularity. Her 66 novels and 14 short story collections have been continuously in print. The shy and private Christie is still highly regarded as one of the most important novelists in the 20th century, possibly the most important in the genre of crime-fiction. In 2013 her novel The Murder of Roger Ackroyd (published in 1926) was voted the Best Crime Novel Ever by over 600 fellow authors of the Crime Writers’ Association. Christie is remembered today mainly for her crime fiction, but let’s not forget that she was a versatile author and also penned six romance novels (under the pseudonym Mary Westmacott, until 1946 when her cover was blown by an American critic). With her stage-play “The Mousetrap” still entertaining hundreds of audiences a year, it is unlikely that Dame Agatha Christie will be forgotten any time soon!

“It is clear that the books owned the shop rather than the other way about. Everywhere they had run wild and taken possession of their habitat, breeding and multiplying, and clearly lacking any strong hand to keep them down.” (Agatha Christie, The Clocks) 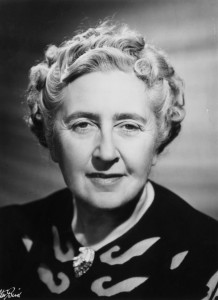