These days, it seems as though you could walk into your local coffee shop, shout out names like Matisse, Monet, Picasso, Van Gogh, Pollock, Klimt, Rembrandt, Renoir, Degas, Munch, Chagall, Kahlo, Vermeer, or Dali and every single person there would know what these 14 people had in common. They are painters! They have different styles, are from different cultures, different countries, different eras and have different backgrounds, yet we know them all, despite – probably – never having taken an art history class in our lives. Now for a test! What do the names Xu Beihong, Bada Shanren, Lin Fengmian, Wu Guanzhong, Ren Bonian and Wang Hui have in common? Now, I hope 15% of the people reading this blog know at least one or two of these names already. I assume 35% of you have absolutely no idea, and the last 50% are possibly clever enough to realize that they are Chinese painters, given the subject of this blog. Yes, they are indeed Chinese painters, with those names alone ranging in history from 701 AD to the present day. Chinese painting too has a tradition spanning centuries, with artists today continuing the traditional style of Chinese painting just as often as they push the boundaries of modern art. Two of China’s most renowned and legendary artists from more recent times are Qi Baishi and Zhang Dagian (or Chang Dai-Chien), the darlings of the Chinese Art World in the early to mid 20th century. 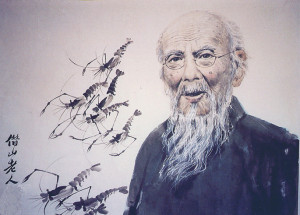 Qi-Baishi, beloved figure in the art world from the late 19th and early 20th centuries. An example of his work shows behind him.

Qi Baishi was born in 1864 to a peasant family in Hunan, China. Despite only one year of formal schooling, he became a carpenter at the age of 14 and taught himself the art of painting. Baishi had a humble outlook, and was popular throughout his life for his passion and belief in his work. He was notorious for bringing beauty to the ordinary, with little to no exaggeration of the subject matter. The lyrical simplicity to his paintings, be they of humans, of flowers, or of a coy, helped him be elected to President of the China Artists Association in 1953. A fan of Qi Baishi’s work, Wang Chao-Wen, said of the artist, “he based his work on reality while experimenting ceaselessly in new ways of expression, to integrate truth and beauty.” He is often praised for the lack of Western influence found in his work, at a time when Eastern artists were often trying to mimic nuances of their popular counterparts. Qi Baishi has monuments to his lifetime of work all over China and even a Soviet postage stamp with his face on it. He fathered nine children through his wife and mistress, many of which followed in his footsteps and became painters of all styles. 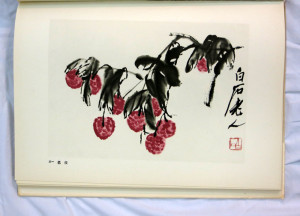 An example of one of Qi-Baishi’s simple and beautiful works, found in our copy (the only one currently on the market in the Western hemisphere) of the Selected Works of Qi Baishi. View it here>

Qi Baishi’s work, as singular as it was at the time when he was most prolific, is nowadays often forged and quite frequently misattributed to him when they were made by another artist attempting to imitate Baishi’s unusual style. As he created thousands of works (possibly up to 15,000 pieces) throughout his lifetime, it is often very difficult to authenticate possible works by him. In fact, in 2011 one of “his” paintings, Eagle Standing on Pine Tree, was sold at auction for $65.5 million US dollars, making it, at the time, one of the most expensive paintings ever sold at auction (though later on the bidder raised doubts over the painting’s authenticity). At this time, 3,000 of Qi Baishi’s works reside in museums and exhibitions.

Zhang Daqian (or Chang Dai-Chien), our other Chinese artist, was born in 1899 in Sichuan, China. One could argue that Dai-Chien (as his name appears in our works by him) was more of a rebel than the sweetheart art world fans found in Qi Baishi. Dai-Chien was a well-respected painter in China, even after he moved away in 1949 due to the growing political unrest within the country. As much as Qi Baishi had his own unique style that sometimes gave him heartache (at times it was difficult for him to convince others that his break from a more traditional style was alright), Dai-Chien as an artist is much more difficult to categorize – the man had a myriad of skills. His painted subjects were as diverse as Qi Baishi’s, for he painted landscapes, human figures, plants, flowers, birds, animals and fish in both the more elaborate and the hsieh yi (brush painting based on purity) styles.

A couple example leaves from our 1967 Chang Dai-Chien’s Paintings. The book places his works chronologically, so the viewer is able to see the maturation of Dai-Chien’s style as he ages.

Dai-Chien, however, possessed an amazing and terrible skill – the art of forgery. As skilled and gifted a painter as he was in his own right, Dai-Chien was one of the most prominent forgers in the Asian Art world. His works of Shitao, a 17th century painter, have fooled customers the world over. In his article China’s Broken Art Market, Felix Salmon revisits a moment in 1967, when Dai-Chien visited the University of Michigan to view on exhibition of the works of Shitao, and to (I’m sure) the tour guides’ dismay, Dai-Chien “began to laugh and point to various works on the wall, saying: ‘I did that! And that.’” Strangely enough, despite extensive research on our end, we were unable to find out whether Dai-Chien was ever held responsible for his forgeries. As no criminal allegations were found, we are led to believe that he was open and honest about his forgeries to those he directly gave or sold them to – that it was probably in the next round of sales that any shady business was conducted. In any event, though his forgeries do seem to be at the heart of much of his remembered life, Dai-Chien was a talented artist, and well-studied in many artistic styles, including: paper, ink, brushes, pigments and seals, among other techniques and historical art styles.

Dai-Chien and Qi Baishi both belong to a specific time in Chinese Art History. This blog report is merely cursory, a sampling, if you will, of these specific artists’ lives. In truth, as early as 475 BC artists in the Eastern world were beginning to paint scenes around them. By 200 AD they were painting figures and the human form. The sheer amount of art history in China is much larger than some European countries that we now consider Masters of Art could ever hope to imagine. These two artists alone represent only a small segment of a short period of Chinese art history – and yet both influenced painting in a grand way that appoints them as two of the most well-known Chinese painters in recent past. 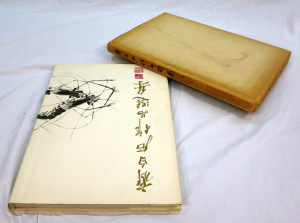