“I am terrified by this dark thing/ That sleeps in me; / All day I feel its soft, feathery turnings, its malignity.” The author of this quote, and many similar to it, was a haunted being. She struggled with depression throughout her life and eventually succumbed to the constant pain she felt and ended her life. Many think of her and immediately think “that lady put her head in an oven” (don’t lie… you did, didn’t you?). Banish it from your mind for a moment! Today, we’d rather focus on her fascinating life and haunting poetry instead. Her being, of course, Sylvia Plath.  Though you may not think that writing a blog on Sylvia Plath at Halloween-time is very… original, we are going to do it – as today would have been her 83rd birthday. Plath was an extremely influential person – not just in words, but in her struggle to have her poems heard – despite seeming to have the world against her! 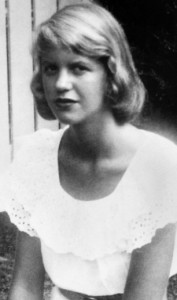 Sylvia Plath was born in October of 1932 and was raised in Massachusetts. Despite her father’s sudden death shortly following her 8th birthday, Plath did not begin to show signs of her mental illness until college. As an 8 year old child Plath survived and thrived through a tumultuous year – first with her father’s death, then her family’s relocation to Wellesley, MA, and also with her first published poem in the Boston Herald’s Children’s Section. Sylvia blossomed in academic environments and in 1950 when she began to attend Smith College in Northampton, Massachusetts, she discovered a whole new world, finding she loved being a part of an academic community. She became editor of The Smith Review and interned, as a guest editor, at Mademoiselle magazine during the summer after her junior year – a highly sought after position. Her mental illness finally seemed to surface during this time, when Plath was distraught after not meeting poet (and one of her idols) Dylan Thomas during one of his trips to New York. She quickly spiraled into depression, and at the end of the summer she made her first documented suicide attempt by taking sleeping pills and laying down in the crawl space beneath her mother’s house – where she was found 3 days later. 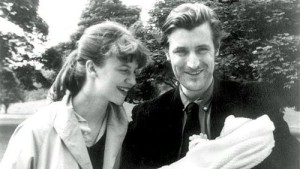 A happy Plath and Hughes after the birth of their daughter, Freida, in 1960.

Now, I know I said that we would be focusing on her fascinating life and poetry rather than her suicide, but bear with me! The events in this particular summer were of great inspiration a decade later when Plath began and published her first and only novel, The Bell Jar. (There is a method to my madness, you can see.) But let us not get ahead of ourselves. Despite her intense summer and a stay at McLean Hospital receiving insulin and electric shock therapy in the fall, Plath recovered and graduated the following June with high honors. She received a Fulbright Scholarship to study at Newnham College, Cambridge, where she continued to study poetry and was constantly published in the university paper, Varsity. The following February, Plath’s life would be turned upside down by her passionate romance with a fellow poet, Ted Hughes. The pair were married after a short four-month courtship. Hughes was described by Plath as a singer, story-teller, lion and world-wanderer with “a voice like the thunder of God” (Oxford Dictionary of National Biography). Plath and Hughes moved to Massachusetts shortly after their wedding so that Plath could teach creative writing at her alma mater, Smith College. Hughes, during this time, taught at the University of Massachusetts in Amherst. After spending a couple years in America, the couple moved back to London, where their first child, Freida Hughes, was born in 1960.

It was at this time that Sylvia’s first large book of poetry was published by William Heinemann, named The Colossus and Other Poems. It received mixed reviews (overall better in the UK than it was received in the US), but did not gain enough enthusiasm to raise Sylvia Plath to the point of literary fame. She finished her novel The Bell Jar in 1962 (though it would not be published for another year) and the couple moved to Devon, England, to a small house in the English countryside. Later on in 1962, Plath and Hughes separated after she became aware of his affair with Assia Wevill, the beautiful woman renting their old flat in London with her husband. After moving back to the city with the children, Plath rented a small flat in a house that was once lived in by William Butler Yeats. Plath, renting the flat on a five year lease, thought this a good omen. The poet experienced a final burst of creative energy in the winter of 1962, writing many of the poems that would eventually be contained in Ariel, her posthumously published book of poetry. The Bell Jar finally hit the shelves in January of 1963, published under a pseudonym, but, like The Colossus, was not the great success Plath’s ego needed. In February of 1963, Plath ended her life.

Her work continues to be immensely popular, but many fans of the author’s brutal poetry know very little of her previous works. By the time Plath entered Smith College, she had written over 50 short stories and had them published in local papers and school publications. Also part of her poetry works were her “landscape poetry” – much of which was centered around Northern England (Yorkshire) and is not given as much credit as her later works. Much of her writing is also contained in her private diaries, which were first published in 1982, though her mother published a book of her correspondence home, letters Plath wrote between 1950 and 1963. In 2000 a new book of Plath’s journals was published, when Hughes gave the rights to publish the journals still in his possession (as executor of Plath’s estate), of which over half was new material to the public eye. Though the last of Plath’s journals were destroyed by Hughes, an act condemned often by Plath’s fans – as he said he did not ever want his children with Plath to see her desperate and depressed last months of thought.

Plath’s style has been difficult for scholars to describe, as her writings ran the gamut of emotion and subject. Death and resurrection was a consistent theme throughout her writings in The Colossus, where as in Ariel her more vengeful poems focus more on the rage and despair she felt as she coped with her mental illness. Her poems are almost autobiographical in nature, as she used herself as the subject for almost all of her work. Perhaps this is why she is so popular with readers – though Plath struggled using her personal self as fodder for her poems, she continued to do so. She unabashedly offered herself as a model for her poems – a difficult undertaking for any author. On this her 83rd birthday, we honor Plath and her contribution to the world of poetry – for giving other writers (as many have since given her credit in helping shape their own work) the strength to delve into their own psyche and use it in their compositions.