Admitting this is probably one of those phenomenally bad ideas I continuously have despite how much older I get, but I am one of those wicked people who pretended to know, well…something about this American literary star for many years. People would mention his name and I would be all, “Oh yes, Carl Sandburg, wow… it went for how much? Woah!” While casually hoping the conversation would change because as far as I knew I could not remember reading anything by this author and continually neglected to read up on him when I got to a quiet corner away from prying eyes. Yes, ladies and gentlemen, I know it is a shocker but I am not omniscient (though I’m sure it seems that way most of the time. Eh-hem). So now, just in case any of you out there are like me and think you can continue fooling people into thinking you know about this magnificent man… think again! 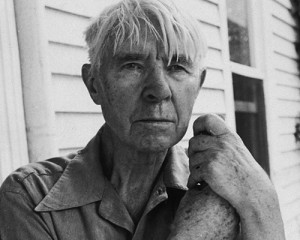 Carl August Sandburg was born on January 6th, 1878 in Galesburg, Illinois. Though he left school at the age of 13 out of monetary necessity for his family and spent years as a laborer in some form or fashion (a milk wagon driver, a porter, a bricklayer, a farmhand, a hotel servant, a member of the American Army – 6th Illinois Infantry Regiment 1898, a coal-heaver… you name it, he did it). After leaving the army, Sandburg was encouraged by a fellow student to spend a few years at Lombard College where he attracted the attention of one of his Professors, Philip Green Wright, who so believed in Sandburg’s work that he paid for his first publication – a book of poetry entitled Reckless Ecstasy in 1904. Sandburg left Lombard in 1903 sans a degree (though he would later received honorary degrees for much of his schooling).

Around 1905 Sandburg moved to Milwaukee and joined Wisconsin’s Social Democratic Party, or in other words, the Socialist Party of America. A couple years later he met another young Socialist Party worker Lillian Steichen (sister of photographer Edward Steichen) and they were married. From 1910 to 1912 Sandburg would work as secretary to the Socialist Milwaukee mayor Emil Seidel. In the coming years Sandburg and Lillian (whom he called Paula) would celebrate the birth of three daughters. After moving around a bit (mainly in Illinois – where at one point Sandburg became a journalist for the Chicago Daily News), the couple and their family settled in Elmhurst, IL in 1919. 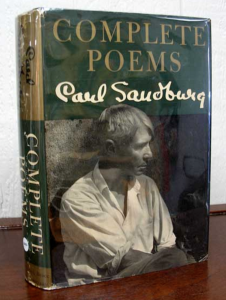 View our holding of Sandburg’s Complete Poems (an Inscribed Presentation Copy, by the way) here!

Once settling down in Elmhurst, Sandburg became interested in writing for himself and his budding family. And write he did! The author began by writing Children’s books, followed by some fiction, a two volume biography on President Lincoln, anthologies of folk music, and poetry books! Some of his works for Children included Rootabaga Stories (1922), Rootabaga Pigeons (1923) and Potato Face (1930). Sandburg was quite interested in the idea of American children’s stories for American children – thinking that European stories of kings and palaces and knights were out of place in American education. In 1926 he published his two-volume series on Abraham Lincoln. Sandburg’s first big win came even earlier, right at the beginning of his real writing career, as he won the Pulitzer Prize in 1919 for his collection of poems titled Corn Huskers. Over a decade after its publication he won his second Pulitzer for Volume II of his Abraham Lincoln biography, and his third Pulitzer was awarded in 1951 for his collection of poetry titled Complete Poems. He is, perhaps, best remembered as a poet, but clearly his variety of work shows a talent in much of the literary arts, one could argue a talent almost unparalleled to this day.

On July 22nd, 1967, Sandburg died in his home of natural causes. After hearing of Sandburg’s death, President Lyndon B. Johnson is said to have stated “[he] was more than the voice of America, more than the poet of its strength and genius. He was America.” And now that I know a bit about him, I couldn’t agree more! Ladies and gentlemen, on this 6th of January we’d like to wish a very happy birthday to Carl Sandburg – an American writer and legend that was the voice of America in many different fashions! 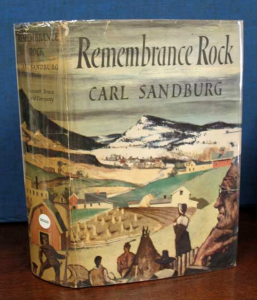 Our inscribed presentation copy of “Remembrance Rock” can be found here!