While this is not as creepy as I just made it sound for effect – to the outsider it looked like a young woman walking around a book fair, knowing quite a few people there but with no bags in her hands. The creepiness was felt solely on my part (I hope). I was once again in a strange situation of “firsts” for my book fair tally – the first time I walked around an antiquarian book fair not looking to buy, not looking to sell, not looking to do anything much but see some friends, evaluate the fair for my blog, and hand out to said friends some newly printed business cards (pretty useless when handing them to people who know your name and your phone number already – but I have to give them to someone otherwise it was a waste of $40). 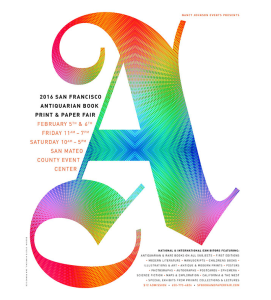 Should we get to the point? What I thought of the San Mateo Fair, for instance? Before I begin this brief discussion, however, let me point out a disclaimer – I only attended the San Mateo Fair for its last few hours on Saturday afternoon. For once, I cannot comment on set-up or on break-down, on sales or even on customers. What then am I going to comment on, you might ask? Well… Brad Johnson, Travis Low & Ken Sanders were all very impressed by the meat carving station.

Just kidding! (I mean, that is a fact but it is not the point). I will say that from an outsiders perspective – I was confused as to where the fair actually was, what dates it actually was (because of the Super Bowl the days of the fair were Friday/Saturday, rather than the typical Saturday/Sunday – and I would very well have shown up to a dead event center on Sunday afternoon if Kim Herrick of The Book Lair had not warned me, purely by chance). When I arrived after an hour long drive I was told I had to pay $10 cash to park – and (of course) had no cash with me. Then drove (accidentally getting on the freeway for the San Mateo Bridge, back the way I came) for 45 minutes just to get some cash out of an ATM and go back to my original destination. Now – does this have anything much to do with how well the fair went? No. But it does have some merit from the outsider’s perspective. I won’t lie, quite a bit surrounding the fair itself was a hint confusing and stressful.

On this note, another disconcerting aspect… a lack of booth numbers on the signs for each booth (and by signs I mean pieces of white paper). I looked in the booklet once I had walked around what I thought was the entire fair, and saw that Antipodean Books was exhibiting! I adore David and Cathy Lilburne and thought I would rush over to say hi. After not finding them whatsoever I had to ask a kindly bookseller, who told me that, in fact, Antipodean Books was not exhibiting – nor were quite a few other booksellers listed in the booklet with booth numbers.

Now, on the other hand, while some of my book friends stated how slow it had been (“slow” in bookseller terms meaning a lack of customers or patrons), a couple others told me that they had sold quite a bit of material and had gone through more than one invoice pad. For those of you that don’t know bookselling, that is quite a good fair hint right there! Vic and Kate themselves walked out of the fair with smiles and arms heavily loaded with material purchased. So, as is usual for every one of these book fairs I have reported on, for some the fair was a success and for others it was not quite all they had hoped. In any case, good fair or bad the booksellers were there – and they are the main event. Also per usual, I got smiles and laughs from all, despite how they felt the fair was going.

So what is the conclusion here? Perhaps just that, as an outsider looking in there were confusing aspects that I might never have seen or understood were it not for being the creeper that I now am! And perhaps I have learned a lesson – always carry cash when going to a new book fair!

Check in next week for our write-up on the Pasadena ABAA Fair!