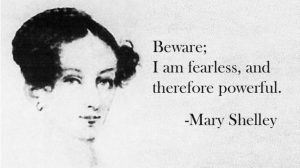 Once upon a time, there was a large house that sat alone on a cliff in the countryside. It contained more dark corners and cobwebs to count. On one dark and stormy night, inside that house a birth took place. One young lady (and a terribly naive young and handsome doctor) created a terrible creature that would come to haunt the world for years to come. His name… was Frankenstein.

(I was joking about the cliff thing. I have no idea if there were any cliffs or cobwebs about that weekend. In any case…)

Mary Shelley was born Mary Wollstonecraft Godwin in August of 1797. She was the daughter of the famous feminist Mary Wollstonecraft and the political activist William Godwin. The young Mary was raised by her father after her mother passed away only a month after her birth. Godwin raised his daughter in a relaxed well-off atmosphere, being sure to educate her thoroughly (in literature and the humanities, as well as his own political ideologies). In 1814 at the age of 17 she began a romantic relationship with a fan of her father’s – one Percy Bysshe Shelley. Unfortunately Shelley was already married and their relationship would cause both parties much heartache and also and pain for their loved ones. Mary and her stepsister Claire Clairmont traveled through Europe for a few months, where she became pregnant with Shelley’s child. The daughter was, unfortunately, prematurely born and passed away. 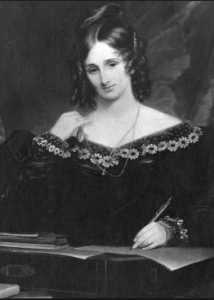 From here the story only gets stranger and stranger – with reports that the three traveled around Europe for six weeks on foot reciting poetry and the great classics to each other, returning (when Wollstonecraft was reportedly with child) penniless and bedraggled. After returning, Mary and Shelley (with neither families on speaking terms with the young couple) lived together in a cottage in Bishopsgate. In mid 1816, numerous disheartening events took place – both couples endured suicides from each side of their relationships. Mary’s eldest half-sister Fanny committed suicide (long to have been thought to be because of her exclusion from the circle that Mary and Claire were a part of) by taking an overdose of laudanum in an inn in Wales. A couple months later, Shelley’s wife Harriet was found drowned in the Serpentine lake in Hyde Park, the result from her own suicide. Though both events undoubtedly shook the young couple, it did not detract from their hasty marriage a short three weeks after Harriet took her own life.

Mary’s stepsister Claire Clairmont had fallen in love with Lord Byron (despite his lack of affections towards her) and convinced the Shelleys to rent adjoining houses with the director on the shores of Lake Geneva. She resumed a sexual relationship with Byron, that eventually amounted to a daughter (and little else, as it was said that Byron could not stand her personality and constant desperation for him). In any case, this proved to be a most fruitful summer for Mary (or shall I say, Mrs. Shelley?) as it was here at Byron’s Villa Diodati that the group would meet and work on their writings. 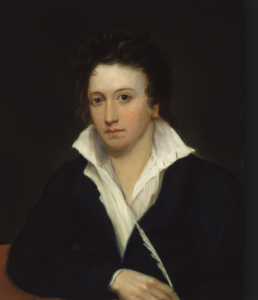 One night at Villa Diodati, Byron, Shelley, Mary, Claire and Byron’s young doctor John William Polidori made a pact to each write a ghost story. Though this caused Mary severe amounts of anxiety at her lack of ideas, she eventually became haunted by the image of a young man reanimating a corpse… and so Frankenstein was born! Though she began it as a short story, with Percy’s encouragement she fleshed the idea out into her first full-length novel. She would later remark on this summer of writing and editing as the time “when [she] first stepped out from childhood into life.”

This time of writing and intellectual stimulation did not last long, however. The Shelley’s were tormented by the deaths of all but one of their children – and just a few short years later Shelley would drown in a sailing accident off the coast of Italy. Though Mary Shelley continued to write throughout her lifetime – stories for ladies magazines, five volumes of “Lives” to the Lardner’s Cabinet Cyclopaedia, novels such as The Fortunes of Perkin Warbeck in 1830, Lodore in 1835 and Falkner in 1837 – her primary concern was the welfare and well-being of her one surviving child, Percy Florence. She made sure he was brought up in a manner that would have suited his father, and the mother and son were close and very fond of each other. She became quite ill towards the end of the 1830s, and passed away over a decade later of what is suspected to have been an undiagnosed brain tumor. She was only 53 years old. A year later, her son and his wife finally opened her box desk, and are said to have found locks of her two dead children’s hair, a notebook with entries from both herself and Percy Shelley, a copy of on of his poems along with a silk satchel of his ashes and the remains of his heart.