On September 27, 1792, George Cruikshank was born in London. His father, Isaac, was a leading caricaturist of the 1790’s. Both George and his older brother, Isaac Robert would enter that profession as apprentices and assistants to their father. George Cruikshank would come to be known as a preeminent artist of his time, and as a stern, moral Victorian. That image crumbled, however, following his death.

Cruikshank established himself as an overtly political artist early on. He experienced his first success with William Hone’s The Political House that Jack Built, a play on the popular nursery rhyme “This Is the House that Jack Built.” The rhyme had a long history of being adapted for satire and parody. Samuel Taylor Coleridge wrote a self-parody under the name Nehemiah Higginbotham in 1797 using the rhyme as his foundation; in the Rolliad’s “Political Miscellanies,” “This Is the House that George Built” criticizes George Nugent Grenville, Duke of Buckingham, for supporting William Pitt the Younger. 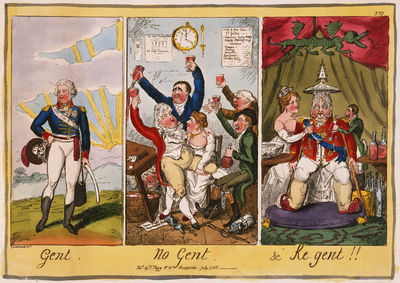 “Gent, No Gent, and Regent,” in which Cruikshank lampoons the irresponsible Prince Regent

From that point forward, Cruikshank’s career would be marked by a willingness to address politics, and his views weren’t always admirable. Cruikshank was very patriotic and openly racist.He followed The Political House that Jack Built with the anti-abolitionist New Union Club, satirizing an abolitionist dinner party with black guests. He also didn’t shy away from attacking the royal family and leading politicians. His commentary was so scathing that in 1820, he received a bribe to pledge “not to caricature his majesty in any immoral situation.”

By the 1830’s, Cruikshank had reached the height of his career. John Marcone, a short-term editor of The Monthly Magazine, invited Cruikshank to do a series of illustrations for an up and coming author, Charles Dickens. Cruikshank’s first partnership with Dickens was for Sketches by Boz (1836). Three years later, Chapman and Halls issued an enlarged edition, for which Cruikshank enlarged all but one of his original illustrations and completed thirteen more. He also completed the Cheap Edition’s frontispiece, which was eventually immortalized on the cover of Dickens Quarterly. 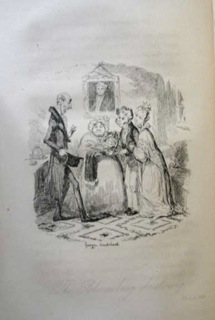 From ‘Sketches by Boz’

Cruikshank again worked with Dickens when Oliver Twist was published in Bentley’s Miscellany (Feb 1837-Apr 1839). He also illustrated Dickens’ Memoirs of Joseph Grimaldi (1838) and “The Lamplighter’s Story” in The Pic-Nic Papers (1841). By this time, however, Cruikshank’s politics had already begun to complicate his relationship with Dickens. Cruikshank, formerly a heavy drinker, had become a complete teetotaler. Dickens disapproved of the overbearing attitude of Cruikshank’s temperance works like The Bottle, and he also didn’t appreciate Cruikshank’s moralistic emendations to a volume of fairy tales.

A Letter from Hop-O’-My-Thumb to Charles Dickens, Esq

Cruikshank and Dickens’ conflict came to a head when Dickens satirized Cruikshank in “Frauds on the Fairies” in Household Words (1 Oct 1853). Cruikshank published his own response pseudonymously, “A Letter from Hop-o-My-Thumb to Charles Dickens, Esq” in his magazine, arguing “when you wrote your criticism, you knew little or nothing of that history you so strongly condemn our friend for altering.”

Following Dickens’ death, Cruikshank audaciously asserted in a letter to The Times (30 Dec 1871) that he’d thought of most of Oliver Twist’s plot. Cruikshank wasn’t the first illustrator to make such a claim; Robert Seymour had made a similar one about The Pickwick Papers—which Dickens vigorously denied in the preface to the 1867 edition. Dickens’ friend and biographer John Forster answered Cruikshank’s claim with evidence from Dickens’ correspondence, though admitted that Cruikshank’s intimacy with London’s underworld had been instrumental.

Cruikshank had always been regarded as a moral Victorian, and this view was enhanced by his work for the temperance movement. Cruikshank worked tirelessly to promote both the National Temperance Society and the Total Abstinence Society. Thanks to his efforts, he eventually served as Vice President of the National Temperance Society. After Cruikshank passed away on February 1, 1878, his eulogy in Punch magazine read, “There never was a more proper, simpler, more straightforward or altogether more blameless man. His nature had something childlike in its transparency.”

From ‘The Bottle,’ a work that firmly established Cruikshank as teetotaling, upright Victorian

Soon after, however, it became evident that Cruikshank had been something less than the upstanding Victorian everyone had assumed. His dying words, “Oh, what will become of my children?” puzzled his wife; the couple were childless, as had been Cruikshank and his previous wife. Soon it came to light that Cruikshank had had an affair with his maid, Adelaide Attree. When his wife had discovered the pregnancy, Attree refused to identify the father and was removed from the household accordingly. But Cruikshank simply moved her to a home close by, and she took the married name “Archibold.” The two had a total of eleven children together; the youngest was conceived when Cruikshank was 82!

While this revelation certainly dimmed his peers’ estimation of Cruikshank’s character, it did little to quell admiration for his work. To this day, Cruikshank remains a celebrated illustrator, with over 10,000 prints, plates, and illustrations to his credit. His works appear in numerous museums, and his works are highly sought after among collectors both of Charles Dickens and of nineteenth-century illustrations.  Collectors of Cruikshank rely upon Albert Cohn’s bibliographical catalogue of Cruikshank’s printed work, among other numerous available resources.