When The Magic Ring was published in 1813, it met with instant success. Its author, Friedrich Heinrich Karl Freiherr de la Motte Fouqué, has largely faded from popular awareness, remembered occasionally for Undine (1811). But JRR Tolkien owes an extraordinary debt to Fouqué for his portrayal of the One Ring and his pioneering work in fantastic fiction. 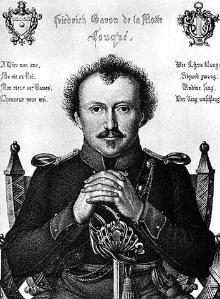 Born on February 12, 1777, Fouqué was a descendent of French Huguenots. His grandfather was a general for Frederick the Great, and his father was a Prussian officer. Fouqué himself didn’t intend to have a military career. Instead, he went to Halles. But in 1794, he left school to join the army and participate in the Rhine campaign. Fouqué would again see battle in 1813, during the uprising against Napoleon. By this time, nationalism had taken deep root in Germany, and these sentiments came to influence Fouqué’s writing.

Following that first stint of military service, Fouqué decided to pursue his literary interests, which were split between medieval romance and northern mythology. In 1806 he versified a sixteenth-century medieval romance. Fouqué was also the first to dramatize the Nibelung legend, combining both Icelandic sources (such as the Volsunga Saga) with Middle High German legend. This play and its sequels were published as a single volume in 1811 and immediately brought Fouqué public attention.

The following year, Fouqué published Undine. The novel includes elements not only of fantasy, but also of religious allegory, Gothic horror, and historical romance, so it appealed to a wide audience. The book has also received praise from critics in all corners. In “The Fantastic Imagination,” George MacDonald says, “Were I asked, what is a fairytale? I should reply, Read Undine: that is a fairytale….of all the fairytales I know, I think Undine the most beautiful.” MacDonald’s love of Fouqué was clear in both his fiction and non-fiction, which would later inspire both CS Lewis and Tolkien.

From 1810 to 1815, Fouqué managed to churn out plays, novels, and epics at an incredible pace. But by 1820, his reputation had faltered; unable to adapt to changing times and tastes, Fouqué still clung to Romanticism. His rivals dubbed him the “Don Quixote of Romanticism.” Fortunately Frederick William IV of Prussia granted Fouqué a pension, so he passed his last years in relative comfort.

Fouqué influenced multiple authors, from Robert Louis Stevenson and Louisa May Alcott, to Edgar Allan Poe and HP Lovecraft. But the most important of these were undoubtedly William Morris and JRR Tolkien. Morris, widely regarded as the father of modern fantasy, opened the door for Tolkien later on. 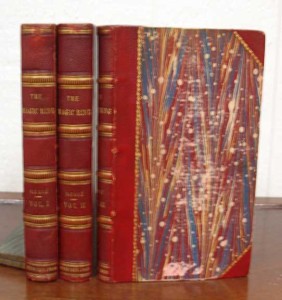 Tolkien scholar Amy H Sturgis notes that The Magic Ring (1813) is a sort of “missing link in the story of Tolkien’s One Ring.” The legend began several centuries ago with the Siegfried story of Norse legend. It also appears in the Nordic Sagas and Eddas, along with the Middle High German Nibelundenlied. Over time the legend evolved, but Fouqué’s adaptation proved incredibly influential. It was taken up by Richard Wagner in his Ring Cycle and by JRR Tolkien in the Lord of the Ring series.

So why has Fouqué fallen by the wayside? His work was tossed aside during his own lifetime as preferences changed. That alone is often enough to relegate an author to the sidelines of history. But as Tolkien has again gained more attention. readers and collectors are rediscovering figures like Fouqué. Which authors have you been most excited to (re)discover?