Valentine’s Day is upon us. If this day of hearts, candy, and warm fuzzies isn’t exactly your cup of tea, you’re not alone! Here’s a look at our three best less-than-romantic rare books for the holiday. 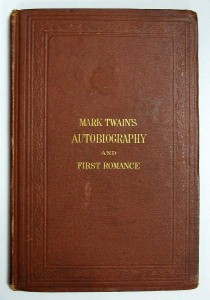 The title of this work is quite misleading; the events have no relevance to Twain’s life. The book, published by Sheldon & Co in 1871, contains two separate stories: “A Burlesque Autobiography,” which first appeared in Twain’s Memoranda contributions to The Galaxy; and “First Romance,” which was originally published in The Express in 1870. They were not Twain’s favorites; indeed, two years after the book was published, he bought the printing plates and destroyed them.

The short stories do feature characters who are supposedly related to Twain. Twain ends the story abruptly, saying only “The truth is, I have got my hero (or heroine) into such a particularly close place, that I do not see how I am ever going to get him (or her) out of it again—and therefore I will wash my hands of the whole business, and leave that person to get out the best way that offers—or else stay there. I thought it was going to be easy enough to straighten out that little difficulty, but it looks different now.”

Revi-Lona: A Romance of Love in a Marvelous Land

Where romance and science fiction intersect, you’ll find Revi-Lona: A Romance of Love in a Marvelous Land by Frank Cowan. The novel is set in Antarctica and includes all the expected elements, such as prehistoric creatures and super science. Though Bleiler dates the novel’s publication to 1879, other sources simply place the novel “circa 1880′s.”

Though Cowan published a number of works, he’s probably better known for being Andrew Jackson’s personal secretary for managing land patents. Cowan was appointed to the position in 1867 and remained in the post until Jackson was succeeded by Ulysses S Grant. That same year, Cowan perpetrated a major literary hoax with his friend Thomas Birch Florence, who owned a failing Georgetown newspaper.

In an effort to bolster sales, Cowan and Florence came up with a fantastic story; they reported that the body of an Icelandic Christian woman who’d supposedly died in 1051 had been found under the Great Falls of the Potomac River. The body proved that other settlers had reached America a full five centuries before Christopher Columbus. Though the story did bolster sales, Cowan and Florence were eventually found out.

The drop title of this work is “Drawn from the lives of Miss Clara C Cochran and Miss Catherine B Cotton, Who Committed Suicide, By Drowning, in the Canal at Manchester, N. H., August 14, 1853.” The two young women worked and roomed together at the Manchester Corporation and had “frequently expressed a purpose to drown themselves.” But their housemates thought little of it and paid the girls no heed.

Then on August 14, 1853, Cochran and Cotton “proceeded hand-in-hand, with great apparent cheerfulness, to the bridge crossing the upper canal…and together leapt into the water.” A few people witnessed the event. The women had obviously premeditated their demise, as both left letters to loved ones and put their affairs in order. Cochran, only nineteen years old at the time of her suicide, stood to inherit a large sum on her 21st birthday, which made her motives even more inscrutable to her contemporaries.

What are your favorite obscure or eccentric tales of love? And what rare book would you most like to receive for Valentine’s Day yourself?

Related Posts:
A Look Back at Long-Lost Manuscripts
Courtship, Romance, and Love…Antiquarian Style