Taylor Bowie doesn’t look like much of a tough guy. He’s short and thin, with a wispy goatee and wire glasses, and he wears a baseball hat and sneakers for almost all occasions. He loves books and food and cats, not necessarily in that order, and he’s been in the book trade so long even his hair has gained mythical status — young booksellers tell of having heard it once existed. He’s the unofficial godfather of many fellow booksellers’ cats, and like any proud parent once regaled me with pictures of his extended feline family over lunch at a book fair, struggling all the while to silently come to terms with a disappointing vegetarian chili prepared by a chef he admires. The point is, everyone loves Taylor, and for good reason. So you can imagine my surprise when I dared to go up against him in a dispute about the veracity of a particular item, and got my ass firmly and unequivocally handed to me. Politely, of course.

It all started with a menu. And not just any menu: a full, priced menu from the 1930s gambling ship S.S. Rex. We’d picked it up from Taylor along with a much more abbreviated souvenir Rex menu, and two others from the Rex’s sister ship, the S.S. Tango. Both ships had been owned by Tony “The Hat” Cornero, a Depression-era rum-runner turned casino magnate with a penchant for stylish haberdashery, who attempted to skirt California’s anti-gambling laws by re-outfitting a couple of old fishing barges and operating them just over 3 miles from the Santa Monica shoreline, in international waters. The Tango menus weren’t the problem — I was able to track down others that had surfaced over the years with relative ease. But the Rex menus were another story. 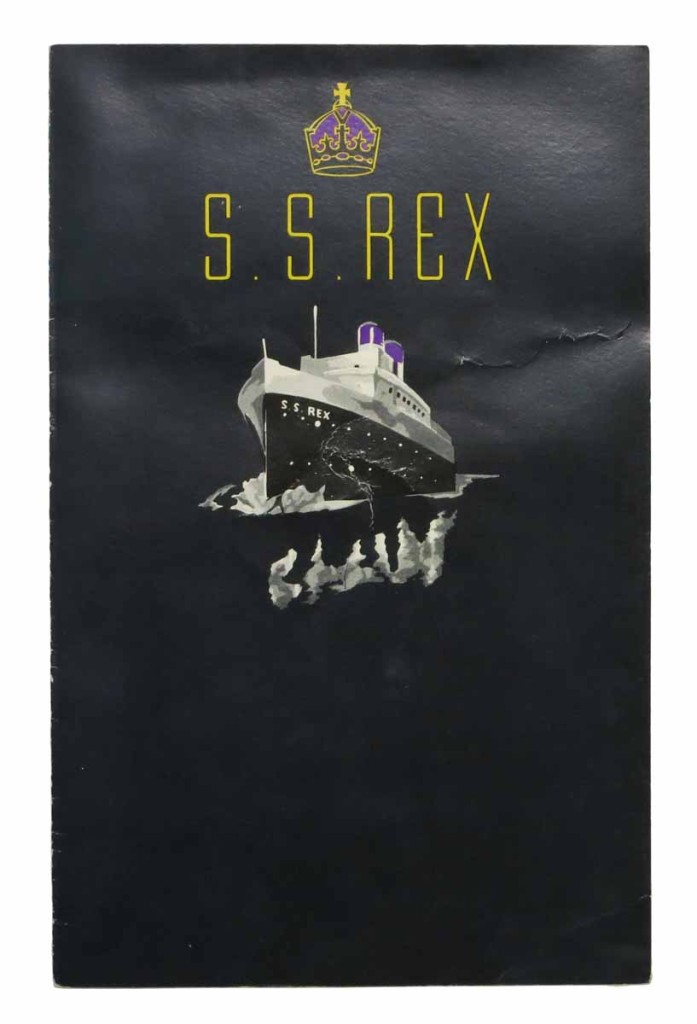 For one thing, the Rex borrowed its name from a glamorous Italian cruise liner also in operation at the time, one that actually merited the designation “S.S.” (unlike the far more prosaic and unwieldy gambling ship, which had to be towed from one location to the next). To make things even trickier, both menus had an image of a large cruise ship on the front, and the full menu even had a crown logo, similar to the cruise liner’s. Was it possible that these menus weren’t from the gambling ship, after all? 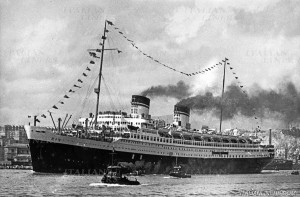 What clinched it, or so I thought, was the name and date scrawled in pencil on the back of the full Rex menu: “Ledy Fabian / Sept. 2, 1938.”

A search in the GG Archives’ passenger lists brought up one Pilade Fabiani, who sailed with his wife and two sons from Cannes on August 9, 1938, aboard — you guessed it — the Italian cruise liner S.S. Rex. Further inquiries proved that he arrived in New York on August 17, whereupon he listed his address as a street in New Haven, CT.

Regrettable as it was, Taylor sure seemed to gotten it wrong. Vic broke the news to him, and we planned to ship the lot back in the next post. That was that, or so I thought.

But Taylor wasn’t getting dissed that easily. Much as he respected my research skills, he said, I was wrong. He’d been dealing with material from the ocean liner Rex for 25 years, and had never come across a priced menu, much less one in English, with prices in American dollars! Plus, he was sure that “Doc” Puccinelli, the maitre’d listed on the back of the menu, had been involved in the San Francisco gambling scene in the 1930s and ‘40s.  Of course, we could return the menus, but, to put it less diplomatically than Taylor did, he was convinced that we’d be idiots if we did.

Well. I hadn’t seen that coming. Taylor — gentle, generous, cat-loving Taylor! — turned out to be stubborn as hell when he wanted to be, and he wasn’t budging. Everything in his experience told him that these were menus from the gambling ship Rex. Everything in mine told me that the odds of a guy named Ledy or Pilade Fabian[i] sailing to Connecticut on a cruise liner named the S.S. Rex in August, and then dining on a gambling ship of the same name on the other side of the country a few weeks later were . . . improbable at best. But if, if, Taylor was right, then he’d be right about us being idiots for getting it wrong. More precisely, I would be the idiot.

Lacking 25 years of experience, however, the only thing for it was more research: I couldn’t simply rely on Taylor’s word, as reliable as his word presumably is. After all, everyone makes mistakes from time to time. And besides, what if a potential customer asked me the same questions I’d asked Taylor? How would I prove that these weren’t menus from the cruise liner, if I hadn’t even been able to prove that to myself?

Let’s just say that it was a very good thing Taylor held out. Because a little more digging turned up the fact that Pilade Fabian had indeed lived in New Haven — and that his father likely still did in 1938, at least according to the 1935 city directory. Pilade himself seemed to have moved with his family to Los Angeles in 1935, and was settled in San Diego by at least 1939. It looked a lot more likely that he could’ve made it home and out to the Rex by September 2, 1938, five days before the gambling ship was raided (not for the first time), a raid Cornero initially greeted by spraying the incoming police officers’ water taxis with high pressure hoses.

I never found anything explicitly connecting “Doc” Puccinelli to the gambling industry, but he did apparently own a sea food restaurant frequented by members of the mob, and possibly a cannery in San Pedro as well, which might’ve been a good spot for a young up-and-coming rum-runner to unload his wares. Even better, a lucky stumble led to the discovery of Noir Afloat: Tony Cornero and the Notorious Gambling Ships of Southern California, a relatively new book by Ernest Marquez that was available via the ever-handy interlibrary loan system. And in it, miracle of miracles, was a copy of an S.S. Rex menu with a cover almost exactly the same as our own: 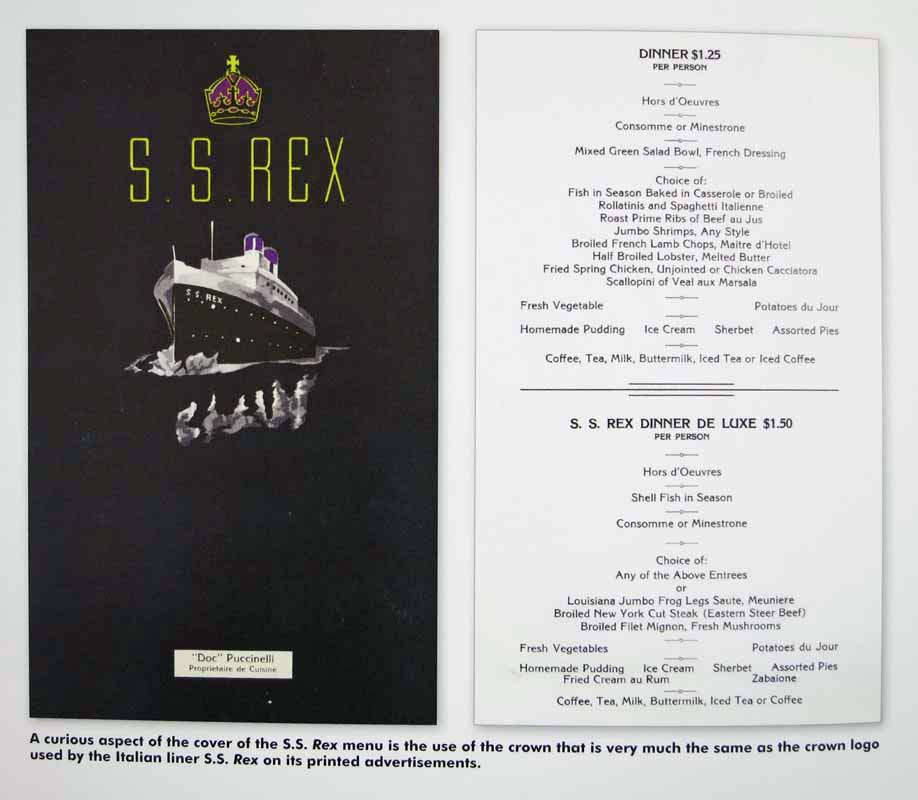 Needless to say, the menus have found a new home, or rather, an old one, of sorts: in Los Angeles, among a large collection of other material having to do with California’s gambling ship history.

And as for me? Note to self, Grasshopper: be patient, and do your damn research. And always, always listen to Taylor — especially whenever food is involved. 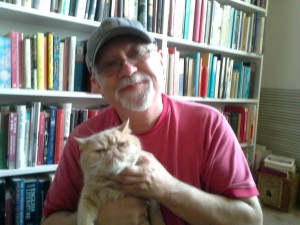 Taylor “The Godfather” Bowie, seen here with Lola, aka “Bruttiboni” (that’s “Brutal Bunny” to you)