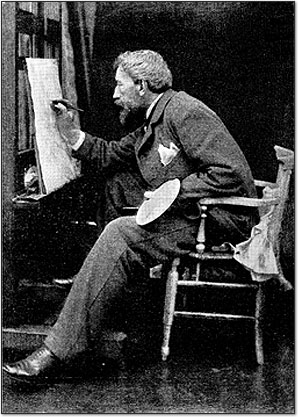 Boutet at work in his studio

Born into a “family of gilt-edged artists,” it’s no wonder that Maurice Boutet de Monvel eventually established himself as a premier portrait painter and watercolorist. When the artist turned his attention to illustrating children’s books to support his family, his illustrations were magnificent enough that he’s considered one of the great figures of the Golden Age of children’s literature, alongside Kate Greenaway and Randolph Caldecott.

Boutet spent the majority of his childhood in Paris. In early 1870, he began studies at the École de Beaux Arts, but his studies were interrupted by the Franco-Prussian War. He joined the French Army, and though he returned from the war relatively unscathed, he would forever after be particularly vulnerable to respiratory illness.

Next Boutet continued his art studies at the Julian Academy under the tutelage of Gustave Boulanger and Jules Lefèbvre. In 1873, he displayed his first canvas at Le Salon and earned two medals over the next few years. Boutet greatly admired the works of José de Ribea and emulated Ribea’s dark style, using only chiarscuro. But he also recognized the need to lighten that heavy palette, which led him to work under Carolus Duran, whose light watercolors were considered revolutionary at the time. 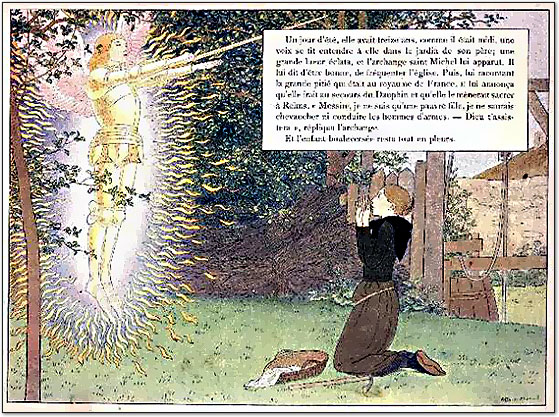 Then in 1876, Boutet went to visit his brother in Algiers. The light of the foreign landscape was a complete surprise to Boutet, and the artist drastically altered his style thereafter. He adopted a primary palette of oranges and blues, using the latter mostly to create shadows. Boutet made two subsequent trips to Algiers, in 1878 and 1880.

Boutet’s life would change again in 1879 with the birth of his first child. He’d been married in 1876, but a child resulted in extra pressure to generate income and support his family. That was the impetus to venture into illustration. He began in 1881 with Les pourquois de Mademoiselle Suzanne (Miss Suzanne’s questions) by Emile Desbeaux and the reading book La France en Zig-Zag (Zigzagging across France) by Eudoxie Dupuis. Both were published by Charles Delagrave.

Yet Boutet was reluctant to give up his career as a “serious” artist. In 1885, he submitted an obviously royalist canvas for exhibition. “L’apothéose de la canaille, ou le triomphe de Robert Macaire” (“The apotheosis, or the triumph of Robert Macaire”) was so controversial, the Deputy Secretary of State for Fine Art pulled it just before the exhibition opened. Now publicly disgraced, Boutet resigned himself to a life outside the art world.

Luckily his friend Edouard Detaille had just founded the Society of French Watercolorists and invited Boutet to exhibit there. He submitted a portrait of a girl dressed in Renaissance clothing, and the work was so well received that Boutet found himself quite occupied as a portrait artist. Yet he to illustrate children’s books and serials, contributing to Saint Nicolas until 1890.

It’s quite rare to find Boutet’s ‘Jeanne d’Arc’ in its dust jacket.

Following the 1896 publication of Jeanne d’Arc, Boutet enjoyed international acclaim. He heavily influenced the young school in Vienna and was invited to tour the United States. He was commissioned for numerous portraits and projects while he was in America. but was unable to complete the most ambitious: a series of large panels based on the illustrations of Jeanne d’Arc.

Boutet later said of the book’s muted palette, “It’s not color, really, it is the impression, the suggestion of color.” He was clearly influenced by the light and shadow modeling of Fra Angelico and the battle scenes of Paolo Uccello. Children’s literature critic Selma G. Lanes 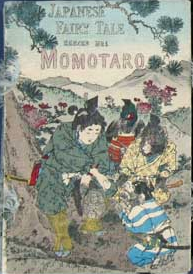 The Japanese style of illustration was popular in Boutet’s day.

noted that the “illustrations have a nobility and grandeur akin to the great church frescoes of the Renaissance. Their pleasingly flat renderings, combined with a sophisticated use of design elements….owe a great deal to the Japanese prints so popular in the artist’s day.”

It’s obvious from the beauty and subtlety of Jeanne d’Arc that Boutet was truly inspired by his chosen subject matter. Boutet had been born in Orléans, a town that Joan of Arc had liberated from the British in 1429. But more importantly, France was still reeling from its loss in the Franco-Prussian War. Boutet wished to remind children of France’s past glory. Thus he opens the book with an admonishment to children to “open this book with reverence…in honor of the humble peasant girl who is [the books' subject].”

The works of Boutet represent an ideal intersection of art and literature for discerning collectors. The multitude of serial and individual publications to which he contributed are fruitful ground for building a fascinating collection. 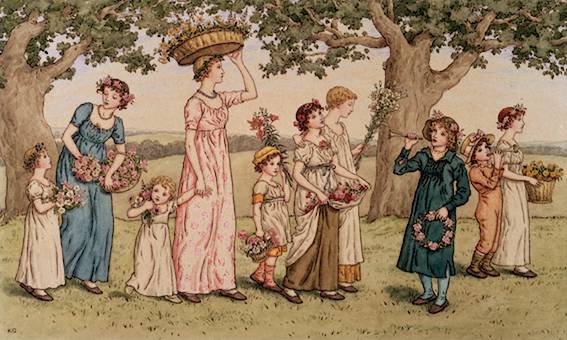