Oh, Seattle. Coffee wellspring of the Pacific Northwest, home to too many musicians and artists for a mere blog post to recount, and, it almost goes without saying, annual host to a much-loved regional book fair. Which, of course, is why I found myself in the Emerald City last Thursday for my first visit to Seattle (not counting layovers or bleary-eyed glimpses from I-5) and the Seattle Antiquarian Book Fair.

Between the abundance of flannel and the Space Needle dominating the horizon, Seattle is just waiting to be cast as the setting for a hipster version of the Jetsons: its city center glass, its art postmodern, and its denizens often bearded, bookish, and/or bespectacled, thereby rendering the game of “spot the bookseller in the bar” next to impossible to play. Did they see us coming, I wondered, these intellectual-looking, future-minded Seattleites, and would they care that a book fair was in their midst?

Trunks of books arrived and piled up in the FedEx store, belonging not just to Tavistock Books but also to our booth-mates, Books Tell You Why (and I think I can safely say that Joachim’s mammoth double-wide trunks plagued the erstwhile FedEx folks even more than ours did). Assorted vehicles packed high with boxes commandeered the hotel parking lots, including the white behemoth driven by the incredibly generous and possibly a bit cracked Brad Johnson (The Book Shop, LLC) and Jesse Rossa (Triolet Rare Books), who hauled the combined stock of eleven booksellers up the coast in one mad fell swoop (and then, astonishingly, brought it down again). Overloaded dollies trundled down the ramps of Seattle’s Exhibition Hall and returned empty. Slowly but surely, booksellers descended on the city from every part of the country and even from overseas, like a horde of collegial, misinformed locusts, who, rather than decimating the surrounding crops, amiably offer themselves up to be devoured instead.

But would it work, that was the question. Would a plain white banner tied to the Exhibition Hall’s railing alert people to our presence? Would the rain forecast for the weekend keep potential customers away? Most importantly, for this newbie to the fair circuit, who woke up at four in the morning most days of the fair with these questions in mind, would Seattle be a repeat of Sacramento for the good ship Tavistock?

The trip didn’t start off very promising, frankly. Two days before we left, Vic’s van got totaled in a car accident as he was on his way to the shop (everyone unhurt, humans and pets alike, thank goodness). I somehow forgot until the last minute that I would need something nicer than usual to wear, and spent a frantic few hours the night before our flight at my trusty local thrift stores, manically amusing myself with thoughts of showing up in various ridiculous prom dresses for the first day of the fair (a.k.a., “fancy day,” when Vic planned to wear a suit and informed me that I should have on something complementary), before scrounging up a couple of things that I hoped would suffice. The airline misrouted Vic’s suitcase and then informed us that they wouldn’t be able deliver it to the hotel until midnight; the rental car service didn’t have the car we’d ordered. By the time we got a different car, picked up our trunks of books, and grabbed a bite to eat, we were grumpy and beleaguered. The fair, it seemed, was already taking a turn for the doomed. 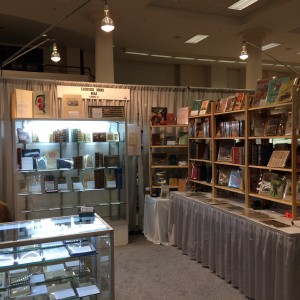 The Tavistock Book In all its glory!

Nevertheless, we rallied and for a time not all was sad in Mudville. Vic’s suitcase arrived at the hotel sooner than expected, and this time around at setup, on Friday, when Vic left me to ready the booth while he scoured the wares of fellow dealers, I managed to get things situated with a little less agonizing than last time. The wonderful crew from Books Tell You Why — Joachim Koch, Andrea Koczela, and Brian Hoey — were, well, wonderful, and I was grateful to have them around for suggestions and shared laughs (not to mention book recommendations). We even sold a few things that day, and bought a few things, which I’m learning is the way book fairs should go. So, hurrah for us . . . right?

Well, let me back up a minute to say that for anyone who has been to the Sacramento but not the Seattle Antiquarian Book Fair, or vice versa, there is a world of difference between the two. Sacramento is smaller, hotter, more tightly packed, and far, far more relaxed. Seattle, admirably well-organized by Louis Collins, while still not the creme de la creme of book fairs (or so I’m told), is certainly more imposing. Glass cases predominate and even have their own special crews, roving bands of handymen who do everything from adjust shelves to clean the doors with a bottle of zealously-guarded Windex. More importantly, dealers come from farther away, with better books and higher expectations. It costs more, so you have to sell more. Plain and simple.

And that, dear readers, is where the crux of the problem lies. 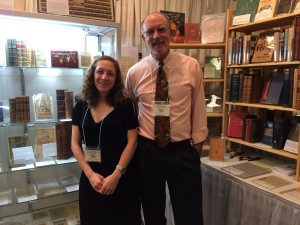 Like a pro – not showing any uncomfortable-ness! The Tavistock Team on Saturday morning, excited for a day of bookselling!

Saturday dawned cool and rainy, but I should have known that a little rain wouldn’t keep Seattleites away. It poured, and they still came flocking to the book fair. (I loved them for this, and still do, from afar.) Yet, all that morning and into the early afternoon, the Tavistock booth remained eerily untouched. Gradually, it dawned on me: we’d brought the wrong books. All of the right books were back at the store! As for those that weren’t wrong, well, they were priced too high. No amount of rearranging, no amount of petty thievery of the precious bottle of display-case Windex from its rightful place behind the back curtains, would change things. Then there was the matter of my dress — also uncomfortably wrong (what had I been thinking?) — and my shoes, which gave me blisters after the first fifteen minutes. I’d also bashed my elbow on one of the trunks during setup, and was burning through band-aids like no tomorrow. It was Sacramento all over again, except this time I was actually bleeding.

As you’re probably guessing, though, we did, in fact, finally sell something, a little Seattle-related booklet that made one nice man very happy. And soon enough, we were passing the invoice book back and forth and politely trying to outmaneuver each other for the calculator while sales piled up at last, much to our relief. Did it matter then that the band-aid on my heel somehow slid over to the top of my foot and clung there, unnoticed by me, for most of the day, completely putting the kibosh on my “fancy day” outfit? I assure you, it did not (once I finally noticed it). I was having too much fun.

However, much as I would love to be able to report that our Sunday sales flew along at the same clip as Saturday’s, alas, they did not. In fact, we didn’t sell a thing, and our rampant success Saturday turned out to be the only reason the weekend wasn’t a total ruin. Well, that and the finds Vic came across, which we’ll be adding to our inventory soon (stay tuned). Expenses piled up, and the fair that I’d been sure had at least outshone Sacramento turned out to be, when we sat down and crunched the numbers this afternoon, roughly equivalent. 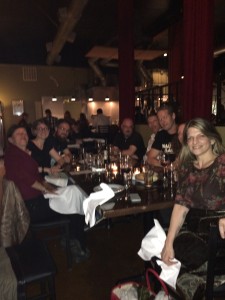 Dinner at Crow, Sunday after pack-out. Having been on their feet all day two days in a row and spending hours packing their books to go back home… well, you’d never know it! Just look at those smiles.

So what’s a young bookseller with two not-so-good fairs under her belt to do? Well, after long and careful consideration, I have to admit that I’m in something of a bind: no matter how much I stare at our tally sheet and its glaring red total, and no matter how many choice expletives I thoughtfully lob in its direction, the 2015 Seattle Antiquarian Book Fair still feels . . . good. We sold some nice books, and if we could’ve made a little more profit on them we would’ve done very well, indeed. The venue was lovely, if hot, and we met some great customers who may yet turn out to be future customers; even some past customers stopped by to say hi and introduce themselves. The booksellers I met were invariably kind and welcoming, and I finally had the chance to see some of my brilliant fellow assistants. Even a few of my fellow 2015 CABS grads (Jon Munster (The Book Bin, Corvalis), Rebekah Medford, and Ken Mallory (Kenneth Mallory, Bookseller)), were there. And finally, of the many, many things I learned this weekend, one may even be life-saving: never, ever have a rubber band fight with Ken Karmiole. He’s deadly with those things. In fact, I highly suspect this bookseller business is just a front for target practice (no wonder he like fairs so much — we’re like fish in a barrel).

Sure, I wish we’d blown our Sacramento showing out of the water. I also wish that my shoes had fit better, and that my band-aids hadn’t been so errant. Mostly, I wish I’d been less daunted (and less sleep-deprived). But damn if it wasn’t fun, in the end.

And as for the good ship Tavistock? What else? We’re patching the leaks, of course, and bringing new ideas to the table. It’s time to get a little creative.

See you in Pasadena, everyone.