The bookcases at the stupendous Tavistock Books booth.

The Sacramento Antiquarian Book Fair is a bookseller’s fair. I’m not sure that you’ll know what I mean when I say that (hell, I’m not even sure what I mean when I say it), so I shall explain as best I can. It seems to me that the Sacramento fair is catered, all-around, to the bookselling trade. It is marketed extremely well, the load-in and take down is the simplest I’ve experienced so far, the management kind and accessible, the food amazing… it is a great local fair for booksellers to congregate at and socialize, but it is also a great fair for buying. Notice I did not state that it is always a great fair for selling. Not through any bookseller or promoter’s fault, it is not always a joy to crunch the numbers on returning home and see red writing all over your legal pad. For buying though? Many booksellers will attest to the great finds made over the years at this small local fair.

This is not to say that the fair is not also made accessible to the public (the civilians who are not us alien-life-forms of the book trade). What I’m trying to say is this… the Sacramento Antiquarian Book Fair is a wonderful weekend activity, whether you are a bookseller or a non-alien life form.

That all being said, let’s gossip.

Every time I get handed an invoice for something my boss found the day before and I write a check, I get very scared. I feel nervous that it’s for something really weird, as it feels as though I’m being served with some kind of lawsuit. This is completely unwarranted, seeing as Vic has been in this trade for quite a while and obviously knows what he’s doing. It is also absolutely ridiculous seeing as I’m the one that tells perfect strangers that I like to look at books on the dead (the more grotesque the images, the better).

That fear aside, my favorite thing to do at the Sacramento fair is to make strange faces at random people passing by our booth. I would never do such a thing at an ABAA fair where I’m mainly worrying about how much my feet hurt having stood in heels for 7 hours and trying to come across as extremely serious and mature. This says nothing against either fair, merely that the general public who attend the Sacramento fair seem to be easily amused and ready to smile, and when they catch me at my game, there are laughs and they move on (or, I mean, hopefully come into our booth to see what the weirdo is selling). As I said, it is a very easy, jovial local fair.

This time around, there were a couple new booksellers exhibiting for the first time, most notably Kim Herrick of The Book Lair. Many sellers returned for another weekend (no matter how poorly or magnificently they did at the last Sacramento fair… which in my opinion shows the dedication and patience exhibited by so many of our trade). A few sellers not exhibiting were to be found wandering the aisles and scouting, and many repeat customers could be located due to the loud exclamations akin to “Bob! How have you been? How’s Susan?” In my opinion, the attitude of the masses at the Sacramento fair (and don’t be fooled, just because it is a local fair and the selling is not always a selling-point… pun intended… it gets quite a crowd) is one to be admired. An easy-going few hours of bookselling, book-buying, drinking, finding that specific something that you didn’t know you needed but now cannot possibly live without… a weekend like that is certainly something to be cherished. 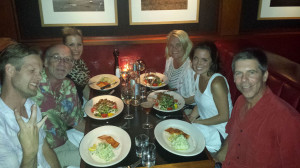 (Even if you spend your day making cross-eyed fish faces to people you don’t know and breaking out in a sweat every time you see an invoice.)