The fact that a typical miner would probably be horrified to discuss his thoughts or feelings to anyone in close proximity to his person matters not to us, because, boy, did they ever write home about it. The California Gold Rush began on January 24th, 1848, when American carpenter and sawmill operator James W. Marshall found gold while working on John Sutter’s property in Coloma, California. Though neither Marshall nor Sutter ever profited from the finding of gold in California (can someone please explain this to me), their findings sparked a movement the likes of which America had never seen. From all over the world, some 300,000 people migrated to California to “strike it rich”. The question we’d like to ask here is: were they glad they made the trip? 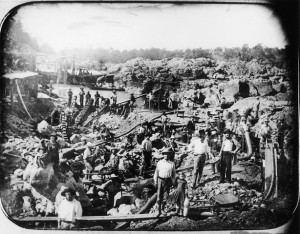 An example image of miners in the California Gold Rush. An interesting image, especially as there is a young girl front and center!

Though complaining seems to come naturally to all members of the human race, perhaps the miners in the Gold Rush weren’t complaining, so much as explaining the horrible situations they found themselves in once they got to the extolled beautiful “California”. It is widely accepted that conditions in the mining camps around Northern California were somewhat, for lack of a better word, atrocious. Miners arrived at places with little shelter, a lack of sanitation systems (leading to quickly spreading diseases), and then proceeded to find prices for any and all items to purchase (from food to laundering services to panning materials) inflated to a ridiculous sum. Fledgling miners were indeed in for a rude awakening, one that more often than not led to hardship and difficulty. Many men suffered in cramped and filthy living quarters, surrounded by saloons for drinking and gambling, and prostitutes for loneliness.

“I dislike it most profoundly…”

So how did these awful conditions affect the “49ers’” view of the Golden State? One way for those of us in the 21st century to tell is to read their carefully preserved letters home. In 1854, towards the end of the Gold Rush, young William S. Patterson wrote a letter home to his “Dear Sister”, and described life in San Francisco during the Gold Rush years. Patterson dislikes much about San Francisco, especially the “Jews, Chinese and barbarians of all shades and varieties, for all these things I dislike it most profoundly, and would fwiw [for what it’s worth? Really? Was that already a thing?] give it a wide berth, caring little whether I ever saw it henceforth…” Of course, Patterson was also pretty hung up on a lady-friend living in the city whose mother refused to allow them to be together (like, 4 pages worth of bitter about it), so while that could be a part of his urge to leave the city, it sounds like the “fog & its chilling winds” were helping drive him away. Hundreds of thousands of men like Patterson arrived to an extremely rural environment, with very, very few of them taking any riches home from the goldfields. Internet resources claim that possibly only half of miners made a small profit in the Gold Rush, those arriving in the later years of the Rush mostly ending up losing money.

Another first-hand account from the California Gold Rush years is a title called The Shirley Letters from California Mines in 1851 -52 – written right at the height of the Gold Rush. They are a collection of letters from Dame Shirley (aka Mrs. Louise Amelia Knapp Smith Clappe) to her sister in Massachusetts that were seen by a friend of the family’s and immediately noted for their accurate and detailed descriptions of pioneer life and printed, anonymously at the time, in the Pioneer Magazine. Arguably one of the most valuable views of the California Gold Rush, especially as it was told from the decidedly uncommon woman’s point of view, Clappe’s letters cover all manner of topics, from the roles of women and children in San Francisco, to the perils of mining and other everyday matters. “Dame Shirley’s” anecdotes became the inspiration for a number of Bret Harte’s stories, they were so well told and reported so thoroughly. One of her decisions on mining goes thus: “…in truth, the whole mining system in California is one great gambling or, better perhaps, lottery transaction. It is impossible to tell whether a claim will prove valuable or not. F. has invariably sunk money in every one that he has bought… A few weeks since, F. paid a thousand dollars for a claim which has proved utterly worthless. He might better have thrown his money into the river than to have bought it, and yet some of the most experienced miners on the Bar thought that it would pay” (Shirley Letters, p. 82). In this same letter, Clappe bemoans the obscene amount of profanity used in the mining towns and camps, “whether there is more profanity in the mines than elsewhere, I know not; but, during the short time that I have been at Rich Bar, I have heard more of it than in all my life before.”

Through accounts such as Clappe’s letters, it is clear to see that mining towns and cities were not known for their moral stature and goodliness. The gambling, drinking and violence known in these somewhat remote (to the rest of the US, at least) areas clearly influenced views of mid 19th century California. After all, when the gold rush began, California had yet to become one of the United States and when miners first arrived it was still an isolated and lawless area. San Francisco in the 1840s was a small tent-town of only 200 people, and grew to almost 300,000 in less than ten years once gold was discovered on Sutter’s property. California had become a destination for emigrants from all over the world. The unfortunate state almost had to learn how to be a state in the midst of fury and unnatural excitement. For example, in the midst of the Gold Rush, towns and cities were chartered, a state constitutional convention met for the first time, a state constitution was written, elections held, and representatives were sent to Washington D.C. to negotiate the admission of California as a state, rather than a property owned by the US. Their negotiations proved successful, as California became the 31st state on September 9th, 1850.

In all, I guess you could say that conditions during the California Gold Rush were harsh at best and dreadful at worst. The fact that very few people who migrated to Gold Country ever saw a “return on their investment” goes to show how disappointing and fruitless many of their efforts were. However (since there is always a silver-lining, if you dig deep enough), due to the Gold Rush, California became one of the fastest-growing states in the US, and, due to the permanent settling in California of many of the 49ers, their families and like-civilians, the state’s accelerated development gave it a boost that many other states were not able to experience. It is therefore due in part (even if the miners would laugh to hear it) to the Gold Rush that the ideal of California – of the sunshine, the beaches, the gold, Hollywood, the business – has persevered to this day. 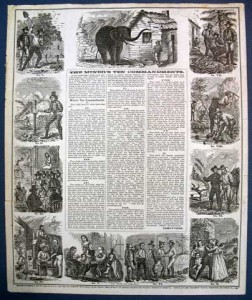