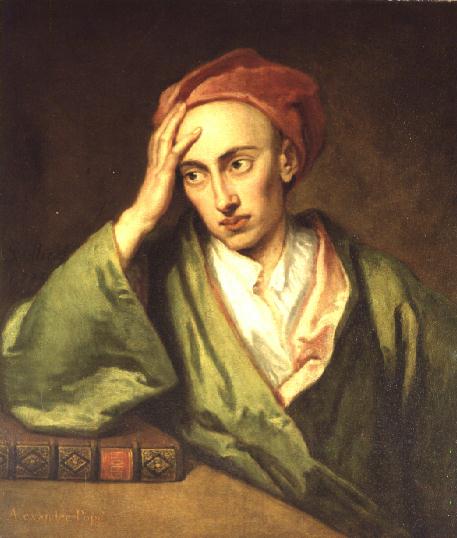 On May 21, 1688 Alexander Pope was born to Alexander and Edith Pope. Despite all odds, Pope would blossom into a preeminent British poet of the eighteenth century. Pope left behind an ingenious translation of Homer’s Iliad, along with a robust body of poetry and criticism. Though history has not always been kind to Pope, he’s recognized as a truly masterful poet whose influence can still be felt.

Challenges of Anti-Catholicism and Illness

Pope’s parents were recent converts to Catholicism, and they chose an inopportune time to leave the Church of England; anti-Catholic sentiments ran high, and the Test Acts seriously limited the rights and opportunities of Catholics. The family was forced to move out of London to Binfield. Catholics were also forbidden to attend public schools, so Pope was mostly educated at home by his aunt. For a few years he attended a Catholic school in London, but he taught himself French, Italian, Latin, and Greek. Pope had discovered Homer by the time he was six years old.

When Pope was 12 years old, he published his earliest extant work, Ode to Solitude. That same year, he developed the first symptoms of a disease that would cripple him for the rest of his life. Now largely accepted to be Pott’s disease, a form of tuberculosis, the illness stunted Pope’s growth and caused severe deformation of his spine. He never grew over four-and-a-half feet, and he remained frail and asthmatic throughout his life. Pope’s size and appearance would later make easy fodder for his detractors, who called him the “hump-backed toad.”

A Rapid Rise to Fame

In 1710, Pope’s Pastorals appeared in Jacob Tonson’s Poetical Miscellanies. Pope claims, however, that he wrote the poem earlier, when he was only 16 years old. The following year saw Essays on Criticism published anonymously–but everyone knew it was Pope. The work highlighted Pope’s mastery of (and preference for) the heroic couplet. It also attracted the attention of more established poets Jonathan Swift and John Gay. Together, the three poets would go on to found the Scriblerus Club. Its purpose: to satirize ignorance and poor taste. Scriblerus, a precursor to Pope’s Dunciad, features the inept character Martinus Scriblerus, who embodies incompetent criticism and scholarship.

When Pope published The Rape of the Lock in 1712, he cemented his position as an outstanding poet of the time. The poem pokes fun at a real-life squabble between two prominent Catholic families over the theft of a young woman’s lock of hair. Pope was now part of a circle of elite writers that included not only Swift and Gay, but also Joseph Addison, Thomas Parnell, and John Arbuthnot. These writers were all overtly Tory, but Pope’s true political standing was never clear.

An Authorial Living Thanks to Homer

Swift consistently encouraged Pope to undertake a translation of Homer’s Iliad. The project was a huge risk; Pope was only 25 at the time and still had anti-Catholic laws working against him. He didn’t have a private patronage as many other writers had. Thus Swift undertook the work of building a subscription list for Pope’s translation. Swift’s efforts paid off. He built an impressive list in both length and prestige. Thanks to the subscriptions, Pope did what few other authors of the time could: he actually made a comfortable living as a writer.

Pope published The Iliad in six volumes, writing 30 to 50 verses per day. He wrote his drafts on the backs of letters to him and to his mother. His first volume came out in 1715, at the same time that Thomas Tickell published a rival edition. Pope’s was accepted as quite superior, even though it bears little resemblance to the original Greek text. Samuel Johnson even declared it the best translation of all time, in any language. Pope used the same subscription model when he tackled The Odyssey.

When Pope’s father passed away in 1719, Pope moved back to the family estate at Twickenham. He used the profits from The Iliad to construct an incredible grotto on the property. It had a camera obscura and other enticing features. The grotto still stands today, though it’s not often open to the public.

Pope decided to undertake his own adaptation of Shakespeare. It didn’t meet the same acceptance as his adaptations of Homer because Pope “corrected” the Bard’s verse. He also changed the text in many places, but left earlier corruptions untouched. Scholar and critic Lewis Theobald excoriated Pope for the work. Pope fought back, making Theobald the protagonist of the Dunciad.

Pope’s Dunciad sparked an incredibly hostile response–so hostile that Pope would leave his house only with two loaded pistols in his pockets. William Broome, who had collaborated with Pope on The Odyssey, also found himself a target in the Dunciad. He was surprised that Pope didn’t receive more vituperation: “I wonder he’s not been thrashed, but his littleness is his protection; no man shoots a wren.”

In 1735, a year after Pope published Essay on Man, Pope placed himself at the center of another controversy. An unauthorized version of Pope’s correspondence appeared, the work of notoriously unscrupulous publisher Edmund Curll. Collected correspondence was relatively rare at the time, so the publication caused quite a furor. In reality, Pope had edited his own letters and delivered them to Curll in secret.

Pope’s health began to suffer in 1738. He turned his attention to revising the Dunciad, this time with British poet laureate Colly Cibber as the protagonist. Cibber was widely thought to lack talent and to have used political connections to get the position of laureate.

Pope’s work remained influential until the nineteenth century. The Romantics saw Homer as a bard, a poet close to nature. Pope’s imposition of rigid structure on the blind poet’s work was considered quite the opposite–unnatural, contrived. Furthermore, the Romantics saw little merit in Pope’s acerbic wit and biting criticism. Later, however, writers and scholars recognized that Homer’s Greece was a place of strict adherence to customs about sacrifice, prayer, war, and hospitality. The strict prosody of Pope’s adaptation reflected the codified social customs of Greece. Pope is now esteemed as one of the great writers of his century.