A large genre of antiquarian books collected and sold by many is known as “Modern Firsts”. Now, quite obviously that refers to Modern First Editions, right? Right! However, what many don’t realize is that the scope of Modern Literature is truly as wide as it is varied! Some “Modern” authors that people recognize the names of include Virginia Woolf, Franz Kafka, James Joyce, Ernest Hemingway and F. Scott Fitzgerald. Today, however, I’d like to talk about one author of Modern Literature that could have been said to really open up the genre in certain ways… Joseph Conrad.

Despite the fact that he is known as one of the greatest novelists to write in the English language, Conrad did not learn English until he was in his twenties. He was born in Berdychiv, part of Ukraine that had been under the Kingdom of Poland (though at the time of his birth under Russian rule) on the 3rd of December, 1857. Born Jozef Teodor Konrad Korzeniowski, he was called simply “Konrad” while growing up – part of his name that his father took from his two favorite poems by Adam Mickiewicz. Though his parents were strongly patriotic and fought hard for Poland’s freedom from Russian rule, Konrad [Conrad] was never quite as interested in politics the way his father was. Because of his father’s political activism, the family (Konrad an only child) was exiled several times to various locales in Russia. Konrad was homeschooled by his father in his early years, and enjoyed reading Victor Hugo, Shakespeare (his first introduction to the English language) and Polish romantic poets (such as the poet his name came from – Mickiewicz). Tragically, by the time Konrad was 11 he lost both his parents to tuberculosis and the boy was sent to live with his maternal uncle Tadeusz Bobrowski.

Unsurprisingly (due to the constant moving, exile, and losing both parents at such a young age), Conrad [as the spelling will be hereafter because I am confusing myself] was a nervous adolescent. He did very poorly in school as he hated discipline and schedules, and suffered from severe anxiety attacks and slight depression. A physician advised his uncle that the boy needed more fresh air, hard work and exercise – and due to his poor schoolwork, the uncle agreed and thought it time that Conrad learn a trade. Despite early protestations that he would be a great writer, Conrad quickly grew to love the idea of becoming a sailor – no doubt influenced by some of his favorite authors, James Fenimore Cooper and Captain Frederick Marryat. At 16, his uncle sent a well-read & intelligent (though not necessarily properly schooled) Conrad to Marseilles to begin his career as a sailor.

Conrad became an important figure in the merchant marine services and eventually settled in England. To become a British subject, Conrad had to apply to the Russian embassy on numerous occasions to be released from being a Russian subject, under rule of the Tsar. In April 1889, after three years of living in England as a captain of the British merchant marine, he was granted his request and released from Russian rule. 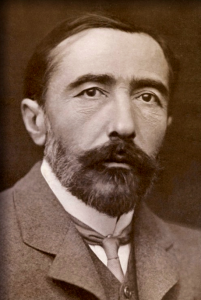 After many years at sea (and on land, as Conrad probably only spent half of his time in the merchant marines at sea), Conrad decided at 36 years old to give up his career and focus instead on his literary skills. In 1895, his first novel, Almayer’s Folly, was published under the Anglicized name Joseph Conrad. Almayer’s Folly, like many of Conrad’s works, deals with a criticism of colonialism (similar to his later, and famous work, Heart of Darkness). Within 5 years he had written and published 3 novels. At the beginning of his writing career he was often published in literary magazines, quarterly papers, and newspapers. At first his writing was mainly only recognized by English-speaking intellectuals. Widespread popularity for Conrad did not come until 1913 with the publication of Chance (now, ironically, largely considered one of his lesser works).

Conrad’s works, like those of Woolf and Joyce, opened up the modernist genre of literature in a few different ways. He experiemented with daring new narrative techniques and even employed different character studies where the audience was almost a part of their evil or good behavior (making his characters seem wildly accessible). Perhaps some of what makes Conrad’s work so influential is the fact that much of the detail in his novels (characters, locales, treatment of citizens around the world) was based on real life and his actual adventures during his time as a captain of the merchant marine. The realism in his novels is subtle but always there – a fascinating presentation of real life in the form of novels and short stories. 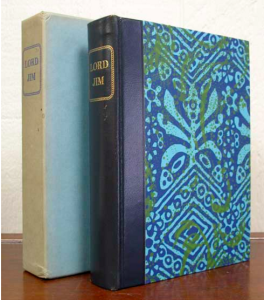 Our shop holding of “Lord Jim” is up for grabs! See it here>