Get yourselves ready for one of the most morbid (therefore, we celebrate it in high style) days of the year… the anniversary of Dickens’ death! Every year we do a Dickens blog around this day, though I prefer to think of it more as a celebration of life blog, rather than as a homage to his death. Last year we wrote about Dickens’ last (and unfinished) work, The Mystery of Edwin Drood. This year, with your permission, I would like to focus on one of his very first works – The Pickwick Papers.

To be completely honest, the Pickwick story never grabbed my interest as other works by our main man. No Great Expectations love story, no Christmas Carol morality lesson, no Tale of Two Cities history… what about it could be so enthralling? Now, in all fairness and honesty, I did not scramble to read The Pickwick Papers in order to write this blog. All the information in this blog is found via research. I’ll let you in on a little secret, however… after writing this blog, I just may have to pick it up and begin reading!

As we’ve stated in blogs past, Dickens didn’t begin his career desperate to become a writer. His first passion was to be an actor – and he (most likely, as it seems everything Dickens did he did well) very nearly got his wish – until he became ill before his first audition and was unable to perform. For reasons we may never know, Dickens did not try to book another audition and never attempted to become an actor again. Instead, he settled down as a political journalist in London. His first published collection of writings was called Sketches by Boz and consisted of various character sketches originally found in his periodicals. Sketches was immediately popular and Dickens rapidly gained success and fame. 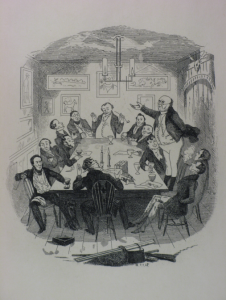 One of the original illustrations by Seymour.

Here’s where the Pickwick story gets interesting. Amusingly enough, Pickwick was not an original idea by Dickens. Pickwick actually began when publishers Chapman & Hall asked Dickens to provide text to match illustrations by (somewhat) popular cartoonist Robert Seymour. Even Dickens later admitted that the idea was not his – that it was Seymour’s. However, the presumption that The Pickwick Papers would have amassed the popularity that it did without Dickens – is completely false.

[Now, I do hope that this blog does not come across as hating on our main man - not at all! I am not trying to say that Pickwick was not at all his idea, though it was what bought him much in the way of fame and success. (Though, that is, you know, technically true about how it all began.)] What I do aim to do with this blog is to bring to light a slightly tragic tale that isn’t well-known about the origins of the Pickwick Papers. 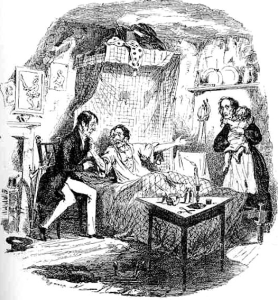 One of the more difficult scenes Seymour had to illustrate for Pickwick.

What is fact and known about the beginnings of the book is that after Chapman & Hall picked up on his idea, Robert Seymour was contracted to make 4 engravings for each written installment of the book (as usual for the time, they were published in installments) and he and the publishers chose Dickens to write the book alongside the illustrations. However, before the second episode could be completed, Seymour committed suicide in his home in Islington, following severe stress and a mental breakdown. The mental breakdown could, possibly, have had something to do with the very little monetary advance Seymour was paid for the Pickwick installments, and also with his struggle to illustrate according to Dickens’ text (according to sources at the time, Seymour envisioned a much more light-hearted tale than he ended up illustrating, at the beginning). In any case, Seymour did struggle with depression, and the somewhat ugly truth of the matter is that, after his death, when Dickens teamed up with “Phiz” to illustrate the rest of the text and introduced the Cockney character of Sam Weller, the series became immediately more popular and sold in much higher volume.

Check out our holding of Pickwick illustrations, circa 1837! See it here>

So what does this all mean? Truthfully, in my (not-so) humble opinion… it means… not much. It is a sad tale, that makes it sound a bit like Seymour got the short end of the stick, yes. However, I think that the fact that the series did not become interesting to readers until Dickens had full control of the text and the full cooperation of the illustrator - is important. We know Dickens was a performer, a writer, a  journalist, and a well-known socialite (eventually)… perhaps we should agree that he possibly also knew what the people wanted! And though Pickwick might not have began with Dickens’ imagination, he was, ultimately, the one who truly brought the text to life. So on this anniversary of Dickens’ death, remember the man as he was – someone who immortalized stories, not just wrote them!