I readily admit that I am a fan of the badass literary woman. Give me Anais Nin, Marguerite Duras or Virginia Woolf any day – women who tell it like it is, who aren’t afraid to examine deep parts of the psyche, of feelings on sex, attraction, anger… any and all of the above. It is no surprise, then, that when I first read works by Sidonie Gabrielle Colette (best known by simply “Colette”), I immediately was attracted to her matter of fact statements on such taboo (at the time) subjects, and the lyrical quality of her prose. Today being the 62nd anniversary of her death, I thought it high time a blog was written about this amazing female literary giant.

Sidonie-Gabrielle Colette was born in January 1873 to a tax-collector/war hero (bet you didn’t think such a combo was possible…) and his young wife in the French region of Burgundy. Though at Colette’s birth the family was significantly well off, by the time she was able to attend school the family’s wealth had diminished substantially and she was only able to attend public school until she was 17. Though public school was not the ideal, it was still a reasonably substantial education for a girl in her social standing at the time. Shortly after leaving school, she married a well-known author of the day Henry Gauthier Villars (known as “Willy”) when she was 20 and he was 14 years her senior. Willy convinced her (as she later recollected) to begin writing, and her first four novels featuring the coming-of-age of her heroine Claudine were published under his name. The novels, (in English) Claudine at School, Claudine in Paris, Claudine Married & Claudine and Annie, were immensely popular and gathered significant wealth for Colette and Willy. Willy, a member of the avant-garde scene in Paris at the time (and apparently a bit of a libertine, as it were), introduced Colette to the artists and writers in Paris and encouraged her sexual explorations (even lesbian affairs) as fodder for her writing.

Unfortunately when Colette and Willy separated and divorced in 1910, all of the royalties and rights to her Claudine novels were under his name, and therefore not in her power to use (or even have access to). Once the divorce was finalized, Colette spent many years touring around France working on the stage – sometimes impersonating her own character Claudine in new sketches. She spent this time in a series of relationships with other women, most notably her stage partner Mathilde de Morny (who was called “Missy”). They lived together openly for many years, though had to tone down their openness when an onstage kiss between the two caused a riot in 1907. It was during this time that one of her most famous novels The Vagabond was published, detailing a world where men rule all aspects of women’s lives. After her relationship with Missy ended in 1912, Colette married the Editor of the journal Le Matin – Henry de Jouvenel. In 1913 a daughter was born, and, finally settled down, Colette was once again able to devote herself to writing. 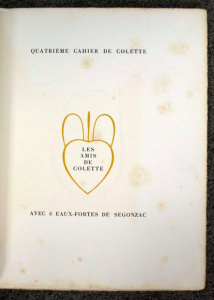 Beginning in the 1920s Colette entered a most prolific writing phase of her life, and used her real-life experiences in her relationship with Jouvenel to write her next scandalous book Cheri - the story of a courtesan entering into a love affair with a significantly younger man, then devastated when the man takes a wife his own age (Colette was, at that time, having an affair with her sixteen year old stepson Bertrand de Jouvenel!). Her marriage to Henry ended in divorce in 1924, and she married her third (and final) husband Maurice Goudeket (sixteen years her junior) in 1925.

As The Vagabond helped establish Colette as a writer (remember, she received no credit for her earlier novels), her next novels (Cheri included) looked at subject matter often considered taboo in polite society – sexuality, married life, women’s struggles, prostitution – all are represented in some way in almost all of Colette’s writings. By 1944, Colette was already frequently esteemed as France’s greatest female writer – and only then did she publish the work that she would be best-known for in the future! In 1944 she published Gigi – a tale of a young girl being groomed to become a courtesan for a wealthy businessman and breaks with tradition and decency by marrying him instead! A few short years later it was made into a film, and then in 1951 adapted into a stage production, with the little-known Audrey Hepburn as the title role – handpicked and cast by Colette herself. 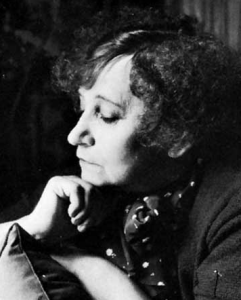 Crippled by arthritis, Colette gradually lost her health and well-being, and passed away on August 3rd, 1954. She was the first French female writer to be awarded a state funeral – no small feat – and was laid to rest in Paris’ famous Pere-Lachaise cemetary, her contributions to literature and female authorship never forgotten!