Recently I sat down and made a list of some authors and book-related events that I wished I knew more about. Too often we can find ourselves leaning towards what we already know – authors we are comfortable with and like. So to avoid stagnancy, we are going to do a couple blogs on things we are not experts in (not that we are experts in everything… just close). Behold… Ivan Turgenev. 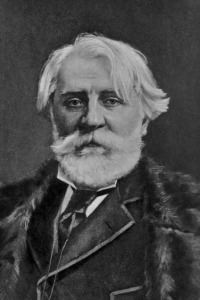 Ivan Turgenev was a 19th century Russian author most well-known for his works Fathers and Sons, A Sportsman’s Sketches, First Love and A Provincial Lady. However, before becoming an author of novels, short fiction and plays Turgenev was a young Russian intellectual from a broken home. Born in Orel (now Oryol) to Sergei Turgenev and Varvara Petrovna Lutovinova, a wealthy heiress. Turgenev did not experience a happy childhood – his father was a womanizer and his unhappy mother was quite abusive to the young Turgenev and his brother. Turgenev studied at the University of Moscow for a year once coming of age, and then spent the rest of his schooling at the University of Saint Petersburg from 1834 to 1837 – studied Classics and Russian Literature in particular. From 1838 to 1841 Turgenev attended the University of Berlin. While there, he was quite impressed with the German way of life and resolved to help bring ideas and concepts of the German Enlightenment to Russian society.

Turgenev maintained friendships with several literary greats of the day – one of his closest friends being French author Gustave Flaubert and also maintaining relationships with fellow Russian authors Leo Tolstoy and Fyodor Dostoevsky, though his associations with both were often strained by differing opinions on literature and misunderstandings of personality. (Fun fact: in 1861, Tolstoy and Turgenev’s relationship was under enough stress to warrant Tolstoy challenging his acquaintance to a duel. Though he apologized afterwards, the two were not on speaking terms for the next 17 years.)

Turgenev’s first put his name on the radar of others with a work called Sketches from a Hunter’s Album (also called Notes of a Hunter, in some circles). It was a collection of short stories “based on his observations of peasant life and nature, while hunting in the forests around his mother’s estate of Spasskoye. Due to his time spent in Germany and his fascination with the Enlightenment, Turgenev was extremely anti-serfdom (a regular practice in Russia at the time), and this work published in 1852 is believed to have swayed public opinion at the time in support of exterminating the dated practice in 1861. Turgenev considered this work to be his single most important contribution to Russian literature, though in modern times it is not necessarily the one most know him for. 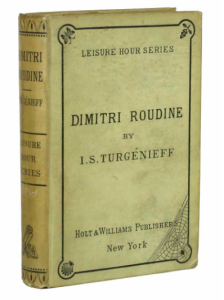 The 1850s-1860s were a considerably artistic time for Turgenev, he wrote several novellas, novels, short stories and plays while still in Russia. Slowly Turgenev traded his style of Romantic idealism with beautifully written phrases on nature and the inconsistencies of man and love for a more realistic style. In 1862 Turgenev’s most popular and enduring work was published, a novel called Fathers and Sons which was both beloved and reviled in Russian society – embraced by the modern thinkers and cast out by the more traditional, older generation. The extreme criticism he received for his work by the traditional thinkers spurred his final move from Russia – to live out the rest of his days between Paris and Baden-Baden. Turgenev is a fine example of a forward thinker who wasn’t scared to push the limits of what was expected in society at his time. Though the only thing I have read of his publications so far has been First Love (a short, and very interesting read – if anyone is looking for recommendations!)… I think I may just have to pick up a copy of Fathers and Sons next time I head over to the neighborhood book store…