If it’s the second weekend in November, I must be in Boston.  Wait, I was in Boston last week, late October…?  Yes, this year, due to a date conflict at the Hynes, the Boston fairs were right in the middle of the 2016 World Series.  Can you imagine the craziness in town if the Sox had beat the Indians [who are looking pretty tough this post-season] and then the Jays…?  Hey, it’s bad enough as it is with a few hundred [thousand?] booksellers, collectors & librarians running around the Back Bay.

So yes, Wednesday October 26th, found yours truly boarding a direct United flight, SFO – BSO.  My usual [bad] luck took a vacation, and the flight departed [more or less] on time, arriving right around dinner time.  Which I had at the conveniently-located restaurant next to my hotel, Rooster Bistro.  Totally forgettable.  Totally.

A good night’s sleep suppressed that memory, and when Thursday dawned, I made my way to the North Bennett School in the company of Laurelle Swan [Swan’s Fine Books, Walnut Creek CA], an ABAA scholarship recipient to that day’s ABAA/RBS Educational Seminar.  A joint effort, this year 30 bibliophiles gathered to hear the likes of David Whitesell, Terry Belanger, Todd Pattison, Don Lindgren & Nina Musinsky speak about their respective areas of expertise.  I, while there that morning to welcome those 30, was not a seminar registrant this year.  So once all had departed for their designated classrooms, I departed for Brattle Book Shop, 9 West Street.  On arrival, I immediately headed for the 3rd floor [Rare Books].  For those not ever having had the pleasure, Brattle gets lots of books.  Lots.  And Ken frequently pencils bookseller-friendly prices on the flyleaf.  And, this week there was a 50% sale in effect, which began on Monday.  [Note to self: fly out earlier next year].  Yes, I soon expect parcel(s) to arrive from Brattle [as do, I’m sure, hundreds of other booksellers].

Thursday night, traditionally, is the night for the meeting of the ABAA Board of Governors.  This year was no different, and we convened at the nearby Brasserie Jo.  The meeting was filled with typical ‘governing’ administrative matters, which I only mention here, because as part of the meeting, the board approved 7 new ABAA members, of which 5 will be noted here, for, in the past, I have often crossed paths with these fine folk: Kim Herrick, Laurelle Swan, Andy Langer, Michael Thompson & Abby Schoolman.  Congrats to you all!

As is the custom at the Boston fair, Friday night 5 pm rang the opening bell.  I, like many others, made my way in & started visiting folks I knew…  and quickly realized it was downright hot in the hall!  I don’t know the gate, but if ambient temperature reflects occupancy, it was well attended!  I recorded but a single purchase that night, but hey, if, as was the case here, it’s an unrecorded 19th C. adventist broadside, I’m [very] ok with that.  Thank you John.  My book scouting continued the next morning at the Boston Book, Print & Ephemera Fair.  As said elsewhere, “the incomparable Peter Luke snared most of my attention (not to mention funds) with such great items as this 19th C. execution broadside.”

Saturday night.  Why does everything gets scheduled Saturday night?   The Grolier reception.  RBS gathering.  Trivia night.  What to do?  Well, in this case, since I had a Grolier nominee in the works, that got some time.  As did the nearby BSO, which played Mozart & Bartok.  My advice, skip the Bartok should it ever come up. 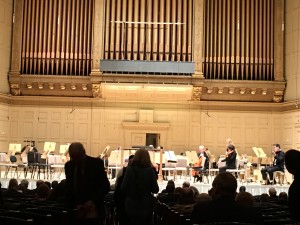 An image Vic nabbed at the BSO!

Sunday, my luck returned true to form…  United 477 was 2 hours late departing Boston.  I shouldn’t complain too much however, as the reason for the ATC induced delay was rain in San Francisco.  We need it.  As I need Boston.  It’s a great fair, in a great town, and I always come away with some great items.  Next year, it’s in November, after the World Series.  So no dilemma about where to be when the Giants are playing … whomever [the Sox?  If so, then I’ll be in Boston again in October!].  In either case, see you there.