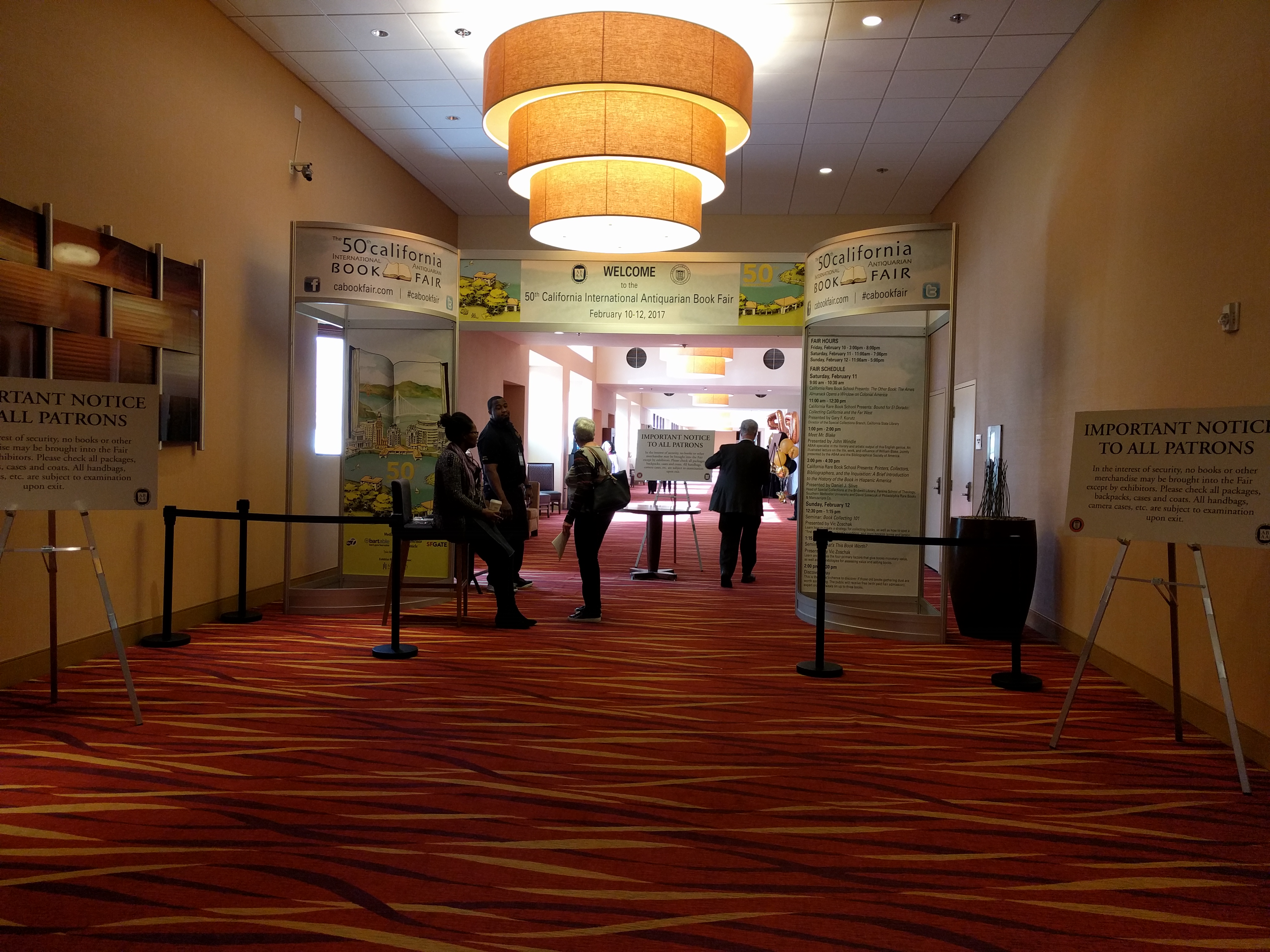 The entrance to the fair!

Well, another year has come and passed us by. Another Book Fair has come and gone. I would venture to say not just any book fair, of course, but the ABAA’s 50th California International Antiquarian Book Fair, to be precise. Despite no longer being an antiquarian bookseller personally, I still attend the California ABAA fairs to see such an amazing group of people in a fantastic setting. Without a doubt, the ABAA’s California Fair is a beautifully set-up fair where one can find all manner of items. From incunabula to amazing pop-up miniatures – modern firsts to Hollywood movie posters! And let’s not forget the Tavistock Books Booth with an array of items from Dickens to Americana! Everyone can find something that suits them at the ABAA Fairs (whether or not they can afford it is a different question entirely).

However, since I’m now attending the fair as an outsider, it is difficult for me to remark on certain aspects of interest to other booksellers and those attending other fairs around the country. In terms of attendance, I was there on both Friday evening and Sunday afternoon and turn-out seemed steady and flowing. It was not often that I saw booths occupied solely by only their manager or owner. There was a healthy number of booksellers as well! Over 200 exhibitors signed up for and exhibited at the fair, and all that I spoke to said that, in terms of sales, it was a success (which is bookseller lingo usually means that they made the money they spent getting to and exhibiting at the fair back… so at least there’s that!). To help with some of the questions specific to exhibiting booksellers, I got a bit of info from the Tavistock Team – Vic and Kate:

Q: How painless was set-up and take-down as compared to other fairs you have exhibited at recently, especially compared to last year’s Pasadena ABAA Fair?

Setup was rather drawn-out for us, though that was partly our fault — our original booth design looked better on paper, and it took a while to rearrange the various cases. Then electrical was slow to get all the booths wired, and didn’t get to our row until late Friday morning. It’s hard to get everything situated just right when you can’t really see what you’re doing (or how clean the glass is!), and we were still futzing right up until the fair opened. But after our travails, we got it finished in time!

Q: What were sales like? Was it a profitable fair for Tavistock Books?

We’re happy to report that the good ship Tavistock stayed afloat. It wasn’t a great fair, but it wasn’t a bad one, either. Given our sometimes less-than-stellar track record, we’re not going to complain, in fact, as Vic has been saying, “We’re OK with OK!”

Q: Was turnout as grand as you expected it to be? Two years ago at the ABAA fair there were reportedly quite a few thousand people. Was it a similar experience this year?

Other booksellers reported aisles too packed to walk down, so we presume the turnout was high. Our location [on the corner of the exhibitor space, across from the Bancroft Library’s wonderful exhibit of California fiction] never seemed to get that kind of traffic, unfortunately. Though maybe that’s just a case of the cash box being greener on the other side of the curtains?

Q: What was the overall bookseller attitude toward the fair? Two years ago many were quite skeptical of holding the fair in Oakland, but the sales and turnout cured their skepticism! Was there any anxiety over how this year’s fair would hold up to the past in the bookseller community?

From what we’ve heard so far, it sounds like just about everyone is happy with how the fair went. Given the unusual and somewhat bizarre array of circumstances working against this fair’s success — the proximity of the New York fair, the recent enactment of California’s new law about signed material [AB 1570], the Mission Impossible-style theft from a London Caladex facility of three booksellers’ wares before shipment to the fair, and the emergency landing of a plane bearing another bookseller’s books in the remote arctic en route to California — that’s saying a lot. Kudos to all involved, and a big “thank you” to fair coordinator Michael Hackenberg for his tireless efforts, as well as all the good folks at White Rain Productions!

Though you wouldn’t know it looking at them, these two have pains shooting up their legs and out their eyeballs!

The ABAA Fair coming only a week after the Pasadena Book, Print, Photo & Paper Fair offers a wonderful twofer for out of town booksellers and customers, but in all truthfulness, it can be quite stressful on the booksellers themselves. You would never know it to look at the smiling faces behind the beautifully-arranged display cases, but by the Sunday of the second fair there is more than one smiling face masking an exhaustion only known by those who spend whole days in a row on their feet being charming. Oftentimes, people who don’t know antiquarian bookselling think of it as a somewhat lonely job – sitting in a dark corner sniffing dust-covered leather tomes and muttering to yourself in between inhaling on your pipe – but despite the fact that at times it is a solitary life (and often preferred that way), most people don’t understand that the level of sociality experienced in the few days of a book fair can amount to the equivalent of months’ worth of gabbing by the water cooler in an office setting. Book Fairs are an amazing place to really see what the sellers are made of… they are cool under pressure, they are charming even if their sales are down the toilet, they smile even if they have pain shooting up their legs and out their eyeballs! 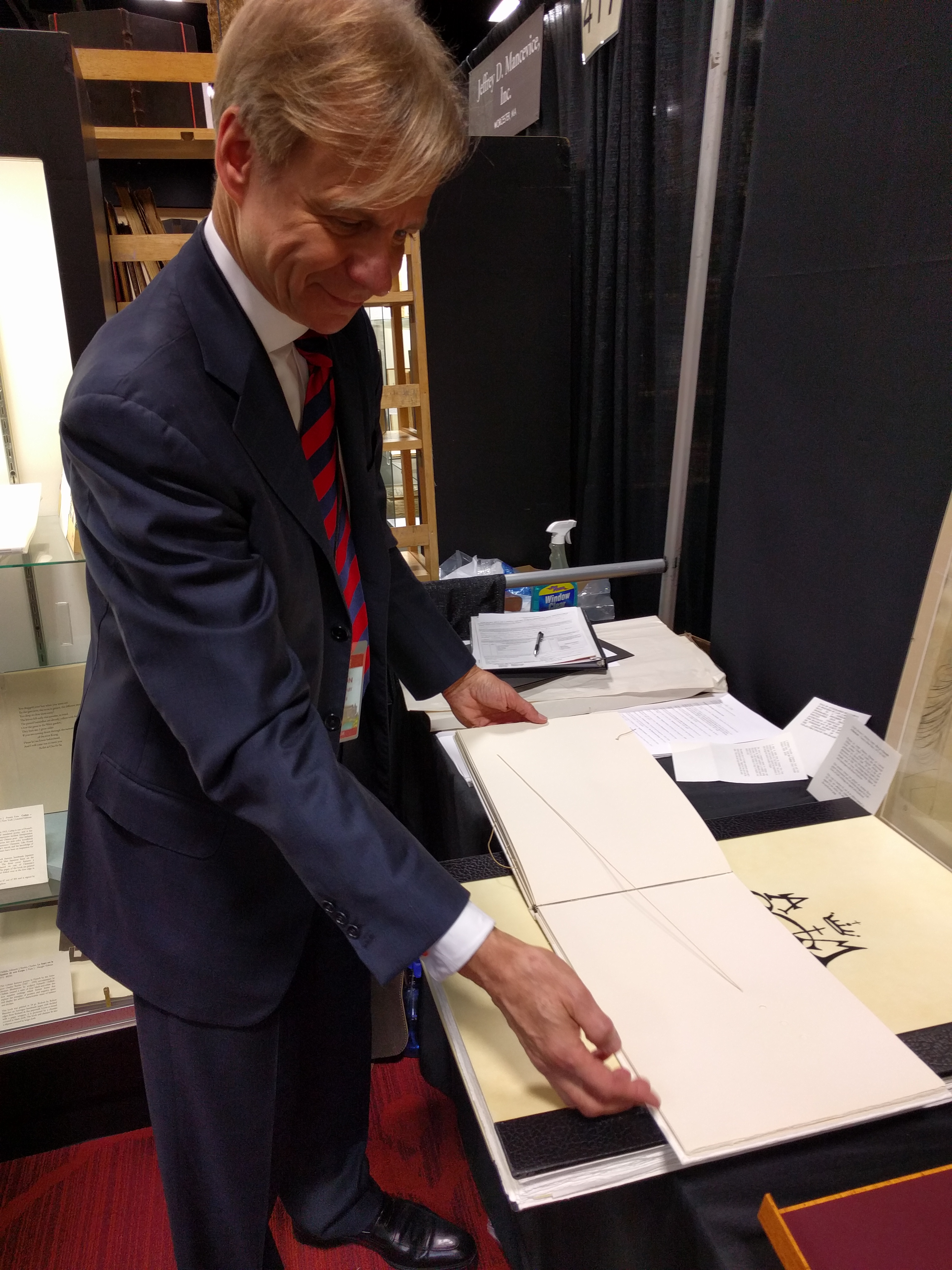 Michael Thompson of Boreas Fine Art showing some of his trickiest and most beautiful pieces!

In terms of interesting items at the fair, a few things that caught my eye were the colorful miniatures at new-ABAA member (and friend to Tavistock Books) Kim Herrick’s booth for her business The Book Lair, and the larger-than-life art books shown to me by Boreas Fine Art’s Michael Thompson. Not to mention that even in the Tavistock Books booth something fun caught my eye… a circa 1850 Gold Scale used in the California Gold Rush – in its original manufacturer’s wooden case! Now that is something you don’t see every day! 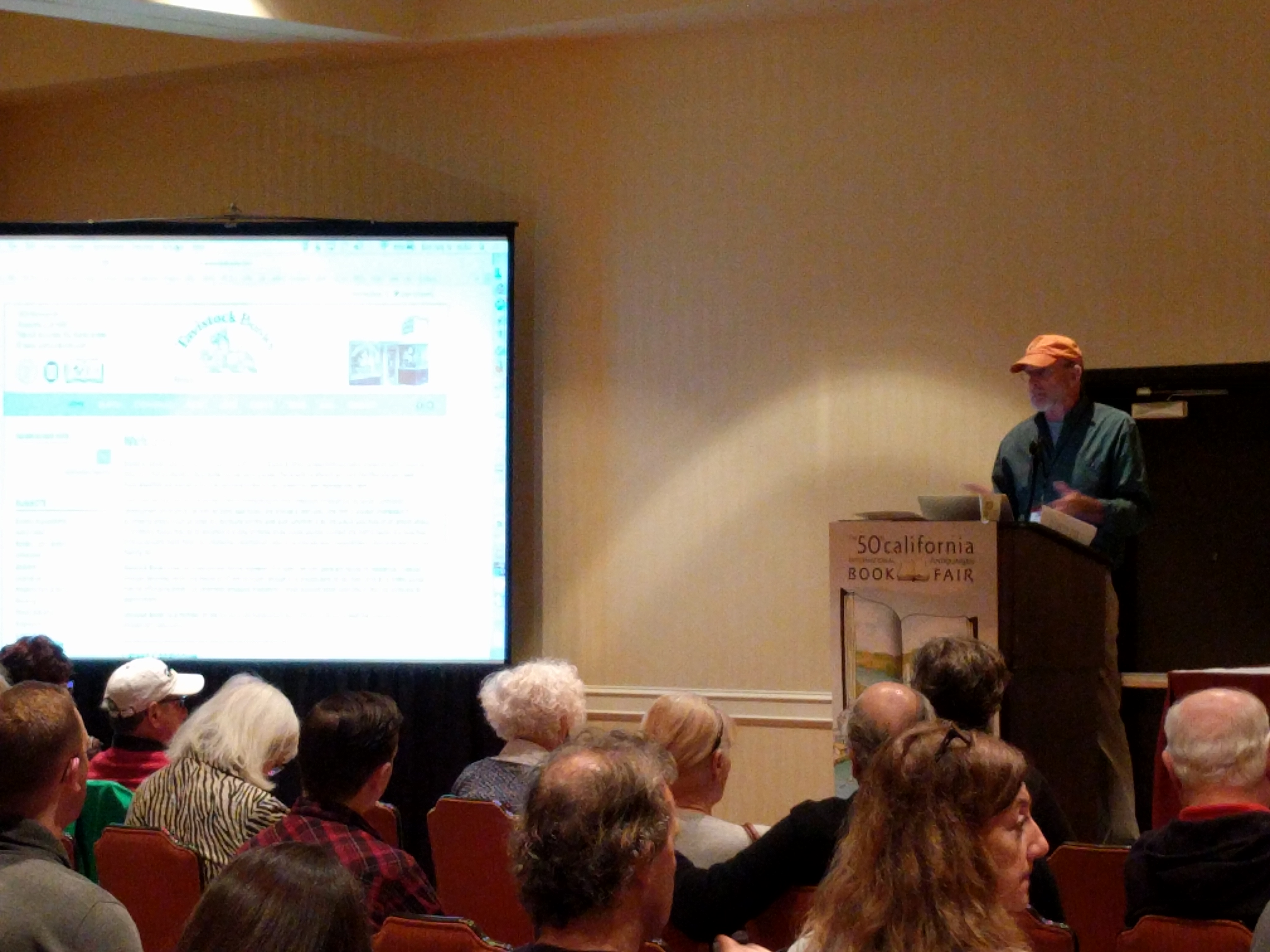 Vic giving his Book Collecting 101 speech at the fair on Sunday!

A few events also stuck out in both attendee and exhibitor minds alike, as the ABAA Fairs always put on interesting and educational seminars and receptions. Alongside other seminar speakers like Western Americana-expert Gary F. Kurutz and William Blake specialist John Windle, our very own Vic Zoschak gave his usual two seminars (usual because they are helpful and beloved by all) Book Collecting 101 and What’s This Book Worth? on Sunday afternoon. I stopped in on these speeches (that I personally witnessed at the ABAA California Book Fair in 2013) and can say with certainty that they are an absolute necessity for those starting out in the trade or in the antiquarian book-buying world and are unsure of how or where to begin. On Friday evening the trade also held a Women in Bookselling reception for the growing number of ladies involved in the book business! Now, along with the socializing of the day and the bookseller dinners in the evening… a full weekend was on everyone’s schedule! And, as usual, the booksellers we know and love handled it with unbelievable grace and charisma. And now, let us return to our dark corners to catalogue new fair finds and smoke our pipes in peace.