archive n. ~1. Materials created or received by a person, family, or organization, public or private, in the conduct of their affairs and preserved because of the enduring value contained in the information they contain or as evidence of the functions and responsibilities of their creator, especially those materials maintained using the principles of provenance, original order, and collective control; permanent records. (Society of American Archivists)

Cataloguing archives can seem like a vastly different endeavor than cataloguing the regular bibliophilic material that, until fairly recently, was every bookseller’s stock in trade. By their very nature, archives are unique, intimately shaped by the person or organization who formed them. Often they include unique manuscript or photographic material that requires research and time to catalogue, sometimes lots of time — although booksellers aren’t researchers, or archivists, and time spent working on an archive means time not spent cataloguing other material. More important, at least for my purposes here, is that the research needed for archives rarely employs the standard (and standardized) bibliographical references, relying instead on primary documents available on genealogical websites like Ancestry, online newspapers, Google, and yes, even Wikipedia. Like a good journalist, booksellers researching archival material need to be able to separate reliable sources from unreliable ones, draw accurate conclusions from them, represent material honestly, and construct an authentic and compelling narrative out of what seems at times to be nothing more than a chaotic mass of papers.

So, if they’re so much hassle, why do we buy and sell archives? In reply, a brief anecdote:

The first archive I ever catalogued consisted of 24 nearly consecutive diaries kept by a man named Lyman Wilmot over the course of about 30 years, from the 1860s to the 1890s, plus related ephemera. Wilmot grew up on a farm in Illinois and later moved with his parents and other adult siblings to Colorado during the silver boom. At the beginning, when he was still in Illinois, I thought he was a bit of a bore and a prude, a lifelong bachelor making endless visits to cousins, selling bibles as a supplement to his farm income and interjecting occasional knee-jerk pieties into his reports on what seemed a rather prosaic Midwestern life. In Colorado, as far as I could tell, he’d only sold pictures, speculated a bit, and worked at a store in Leadville, which meant the purported mining content we’d bought the archive for was of minimal value, at best. This was in September of 2015, about a month after I started working at Tavistock, and I was privately flabbergasted at the amount Vic had spent on the archive, and the price he wanted it to sell at. What kind of nutjob was I working for?

At some point, though, it occurred to me to check Wilmot’s entries from early October, 1871, and sure enough, there were several pages on the Great Chicago Fire (his cousins lived there and lost their house in the disaster). Major incidents in the Civil War and his thoughts on them? Check. Lincoln’s death? Yup. Soon I discovered that one of Wilmot’s young neighbors died after getting struck by a baseball; in another entry, a distressed Wilmot reports just awaking from an erotic dream in which he has kissed a nun. I started staying late every night after work just so I could read the diaries, finding more and more things to appreciate about odd-duck Lyman Wilmot: his involvement with the women’s suffrage movement (eventually leading to his escorting of his mother to the polls for the first time), his visit to a surprisingly prescient phrenologist, this lovely entry from New Years Eve, 1874, shortly before he headed west:

[N]ow as I write the shades of the last evening . . . are gathering fast, the sky is cloudy & as I look out of the east windows of the dining room & see the smoke from the engine of a long freight train rising as a cloud as the train rushes on up the grain, we are now in a living moving world & things look as if they were to last much longer than they will . . . .

And then, astonishingly, I came across a year’s worth of entries documenting Wilmot’s own moderately successful attempt at digging and operating a mine, with two partners, during which he fended off rival claimants and feuded with backers and worked himself into exhaustion every night and marveled at his new strength and griped about always having to bake bread all the time, and, ultimately, grew into himself.

In the end, Lyman Wilmot went bust and moved back to Illinois, but I felt inexplicably proud of him anyway. Plus, I knew that even if he hadn’t struck gold, I had. We put the Wilmot archive in our e-catalogue that month, priced at what I thought then was an astronomical figure, and it sold four times in rapid succession. I wasn’t in Kansas anymore.

Who would’ve thought that an archive of diaries kept by a 19th-century white guy from Midwestern America who no one’s ever heard of could open my eyes to the possibilities and magic of working in the antiquarian book trade?

As institutions and collectors continue to seek highly visual and primary source material, not to mention vernacular material by and about groups traditionally underrepresented in bibliophilic history, booksellers have increasingly dealt in archives and archival material to meet the demand. No one reading this is likely to be surprised by that statement. Nevertheless, despite the undisputed and abiding popularity of archives in the trade, and the plenitude of guides available for archivists cataloguing archives and booksellers cataloguing books, there don’t seem to be any guidelines for how booksellers should go about cataloguing archives.

This blog series is an attempt to fill in that gap in some small way. It’s compiled from my own experiences with archives I’ve catalogued over the past not-quite-two years, as well as from the comments of many of the booksellers and librarians who responded to my request for “pro tips” via the CABS listserv on April 24 – 26; I’ve quoted as many of these as possible, and offer my apologies for those I was not able to include. My hope is that this is only the beginning of the dialogue.

To return to my earlier contention: cataloguing archives can seem vastly different than cataloguing bibliographic material, but it’s not. Many of the same basic skills apply, as do the same ethical and professional standards. The goal, in cataloguing, is simply to ensure that the material we sell is what we say it is.

Step 1: Meeting Your Archive for the First Time

In my experience, archives are singularly unimpressive and reticent in their natural state: a bunch of papers, ephemera and/or photographs crammed inside a box (or many boxes). Depending on where you’ve gotten the archive and what you know about its subject, you may be able to determine at the outset how much time to invest in it. More often than not, though, you have to dig through an archive first to see what you have (especially if you are a mere assistant and your boss plunks said archive on your desk with a cheerful, “More job security for you!”). 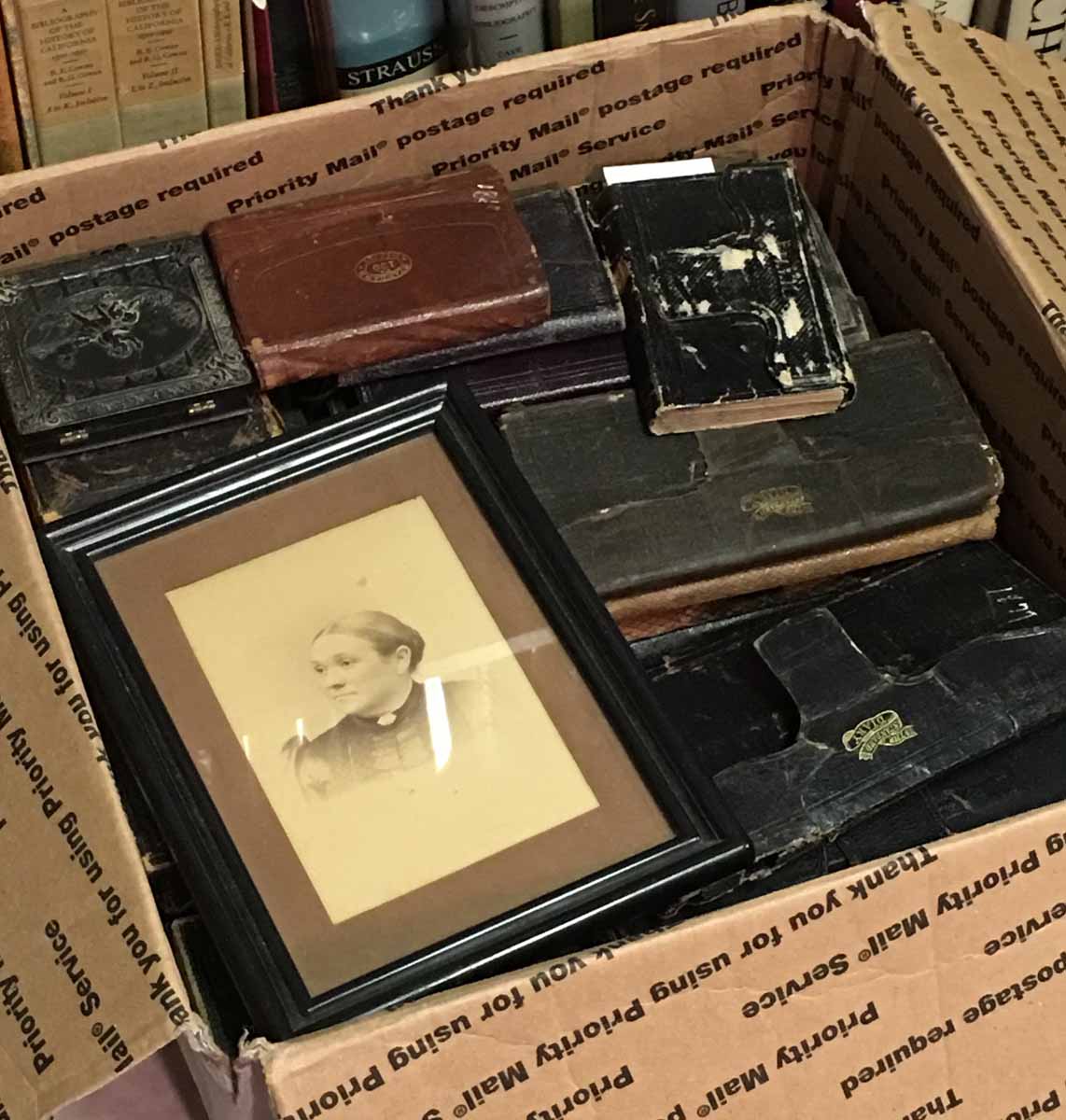 That said, don’t just start pulling out anything that looks interesting! Arrangement matters, or it might. One of the key concepts in archival theory is the principle of provenance, or “respect des fonds” (literally translated as “respect for the group”). The idea was introduced during the French Revolution, when formal archival practice was established as a way to ensure the integrity of public records. It is “fundamental to contemporary archives work and exists to protect the integrity and authenticity of archival records as evidence by retaining the nature of the relationship that exists among records by the same creator” (Sammie L. Morris and Shirley K. Rose, “Invisible Hands,” Landmark Essays on Archival Research, p. 203).

Maria Lin (Rulon-Miller Books) cautions that not all archives have an original order, however. “If it’s clear that you’re dealing with material that has been arranged in some way archivists would want it to stay that way, but if you’re dealing with material that has been spilled out onto the floor a couple dozen times before you got a hold of it then rearrangement is fine. ‘Respect des fonds’ . . . often applies less with personal archives that have no fonds to begin with.”

Before I even get out my pencil and notepad, I like to take a few minutes to glance through the archive first, getting a general feel for what it contains. For me, this is sometimes no more than a way of introducing myself to its different kinds of materials and determining the archive’s overall condition: Does it appear to be complete? Are there any significant defects? If the text is in manuscript, is it legible? If the archive contains photographs, what type of images are they (photo, RPPC, half-tone, color/b&w), and are they clear and well-developed, captioned, etc.?

Not surprisingly, Lorne Bair (Lorne Bair Rare Books) takes a slightly different approach, viewing archives as both a buyer and a cataloguer:

[M]y first step when I approach any archive is gestalt: does the archive “talk” to me on its surface? If it only whispers, I’m immediately filled with doubt — because as drawn as I am to subtlety, I’ve found that it’s unrealistic to expect the same sensibility from my customers. I’m a big one for leafing through lightly and somewhat skeptically: is there a letter, a photograph, a document that seems the least bit unusual? Did the person(s) represented here do anything of sufficient importance to make it into a Wikipedia entry, either they themselves or the thing they were involved in? (I’ve found that this notion, anathema a decade ago, is, it turns out, a decent marker these days for gauging a likely level of compensation for my time. Wikipedia has become our Feuerbachian species-consciousness).  Is it in a language I understand? Will I be able to read the handwriting without a great deal of effort? Is there enough of one thing in the archive — photographs of Alaskan beauty pageant contestants, for example, or of Italian motor scooters — to make it an unusual group of things? If the answer to any of these questions is unsatisfactory, is there something else to hang a hook on – maybe it’s a stack of letters in Russian, for example (huge pain in the ass, for this cataloguer at least) — but they’re postmarked St. Petersburg and dated 1917-1919? (time to brush up on my cyrillic!). Or is it something I can at least flip, with minimal effort, to some other dealer who knows more than me about this (a) language (b) thing (c) person (d) etc.?  I’m willing to look deeper at this point, but if I find myself getting bored or overwhelmed I feel no compunction just walking away. To paraphrase Stanley Tucci, sometimes the pile of paper just wants to be alone.

Ultimately, a first glance is a quick and dirty way of formulating and applying a rough value matrix based on content, condition, and that ever-demanding factor, time. Not all archives are created equal: as alluring as it is to think that each one provides a clear and unique perspective on its particular historical moment, some just aren’t coherent and/or interesting enough to merit a lot of investment. We are, after all, in business.

Next in the series: Getting to Know Your Archive