While working directly under Master and Commander Vic Zoschak at Tavistock Books, one name continuously caught my eye. Any time a piece came across our desks with this name mentioned, my eyes zeroed in on it. I couldn’t tell you if it was because I have a musical background or if I just loved the sound of it (lilting, feminine and birdlike, IMNSHO as Vic would say) – but whenever I read “Jenny Lind” it brought a smile to my face. More recently we had a fantastic item in stock – a letter from Florence Nightingale to the Swedish Nightingale Jenny Lind, asking for tickets to one of her concerts. What an amazing piece, no? We featured it and it did sell, but just having it around made me think of Jenny Lind once again and I decided it was time we all knew a bit more about this famous opera star! 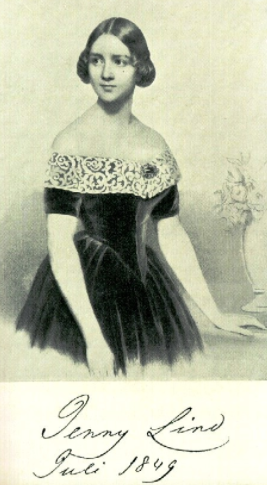 Johanna Maria Lind was born in 1820 into a rather unusual household for the times. Technically illegitimate, she was born to a bookkeeper and a school teacher who were not yet married. Though her mother had already divorced her first husband for adultery (understandable but definitely not the norm in the early 1800s), she would not marry Lind until after her first husband passed away, for religious reasons.  This meant that Johanna was 14 years old when her parents actually married. Not much is known if this was difficult for Lind as a child, but one could presume not quite since she studied from home in the school her mother ran for girls. I would hope that no other student would dare to make fun of the school mistress’ daughter!

When Johanna was about 9, her voice was overheard by the principal dancer of the Royal Swedish Opera’s maid. The maid brought Mademoiselle Lundberg with her the next day to hear Lind sing, and the principal dancer was so astonished that she arranged an audition for Lind at the Royal Dramatic Theatre, where she would begin by studying with Karl Magnus Craelius. Within a year Lind was on the stage and touring around Europe singing for the masses. Within two years, she suffered damage to her vocal cords and was out of the circuit for a few weeks. At 18 Lind starred in Weber’s Der Freischutz at the Royal Swedish Opera and then just two years later she suffered another bout of damage to her voice. This time around she began working with vocal coach Manuel Garcia, who made Lind remain almost silent for 3 months while healing her voice, and then began to teach her proper vocal technique – something she had never had the time to learn! Garcia should be noted as the teacher who saved Lind’s voice, as continuous trauma would have shut down her singing career for life.

In 1843 Lind was in the midst of a tour in Europe and while in Denmark met author Hans Christian Andersen, who fell madly in love with her. Though Lind did not reciprocate his feelings, the two became friends and Andersen is said to have written several fairy tales inspired by her! One can only assume that the later “The Nightingale” was one of these few. A year later, Lind began performing in Germany and Austria, where she connected with musicians Robert Schumann, Hector Berlioz and Felix Mendelssohn (who, though married, also fell madly in love with her and then died prematurely 4 months later, leaving Lind shattered) who were all inspired by her great talent. Mendelssohn even wrote a part for her in an opera debuted after his death, where she took the proceeds and donated them for a musical scholarship in Mendelssohn’s name. It is around this time that Lind became known as the “Swedish Nightingale.” She was madly popular in both musical and non-musical communities, as she donated much of her earnings to charities of her choosing – and would continue to do so for decades.

After performing in Germany and Austria, Lind began singing in England at Her Majesty’s Theatre for Queen Victoria and other aristocrats (you know, people who could afford it). At the age of 29 while performing in England, Lind suddenly announced her retirement from opera – an announcement that still puzzles scholars to this day. Lind would continue to perform in concerts, but rejected all parts in operas from that day forward.

In 1849, P.T. Barnum (as in the circus) approached Lind to begin a tour of the United States. Lind agreed, and due to Barnum’s intense publicity of her coming arrived in the United States already famous. Her performances were so anticipated that her concert tickets were being sold at auction for triple their worth! Throughout the year she spent touring America under Barnum’s management, Lind made roughly $350k. Today, that equates to almost $10 million. Guess what Lind did with the money? You probably guessed correctly – she donated most of it to American and European charities! After a year under Barnum’s thumb Lind broke their contract to manage herself – somewhat tired of the intense publicity of her performances. During this time her pianist, Julius Benedict, left and went back to Europe, and Lind hired German pianist and composer Otto Goldschmidt to take his place. The two were married in less than a year in Boston at the end of their tour. 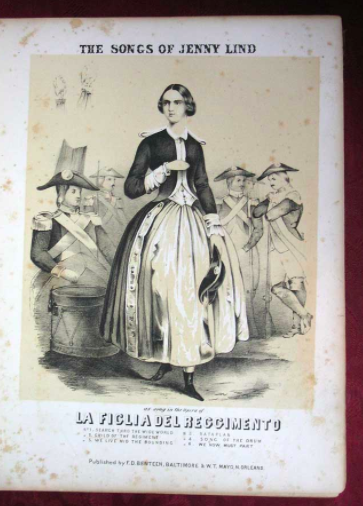 Lind and Goldschmidt returned to Europe in 1852 and spent a couple years living in Dresden, Germany, before eventually settling down in England. They would have three children together – Lind giving birth in her late 30s and early 40s, and Lind mainly focused on her life as a mother and wife. She would continue to give charity concerts throughout her life (passing away in 1887 at the age of 67), but as the years went on they became fewer and farther between. The worst part of researching this “Swedish Nightingale”? Apparently though she made a very early phonograph recording for Thomas Edison on one of his early cylinders, no recordings of her voice exist today. I don’t even think I can describe my disappointment on hearing that! It undoubtedly have been interesting to hear the voice that captured the hearts of hundreds of thousands of people…