This Saturday will mark a triumphant year in the history of Tavistock Books. It will be our 20th Anniversary of opening our doors at 1503 Webster Street in Alameda, California. We took a little time to sit down with the man that started it all, one Vic Zoschak Jr., to see how the years have changed his attitude towards this trade and what he has learned in his experiences.

And Psst! Don’t miss a special email this upcoming Friday regarding a little celebratory gift we have for our loyal customers! 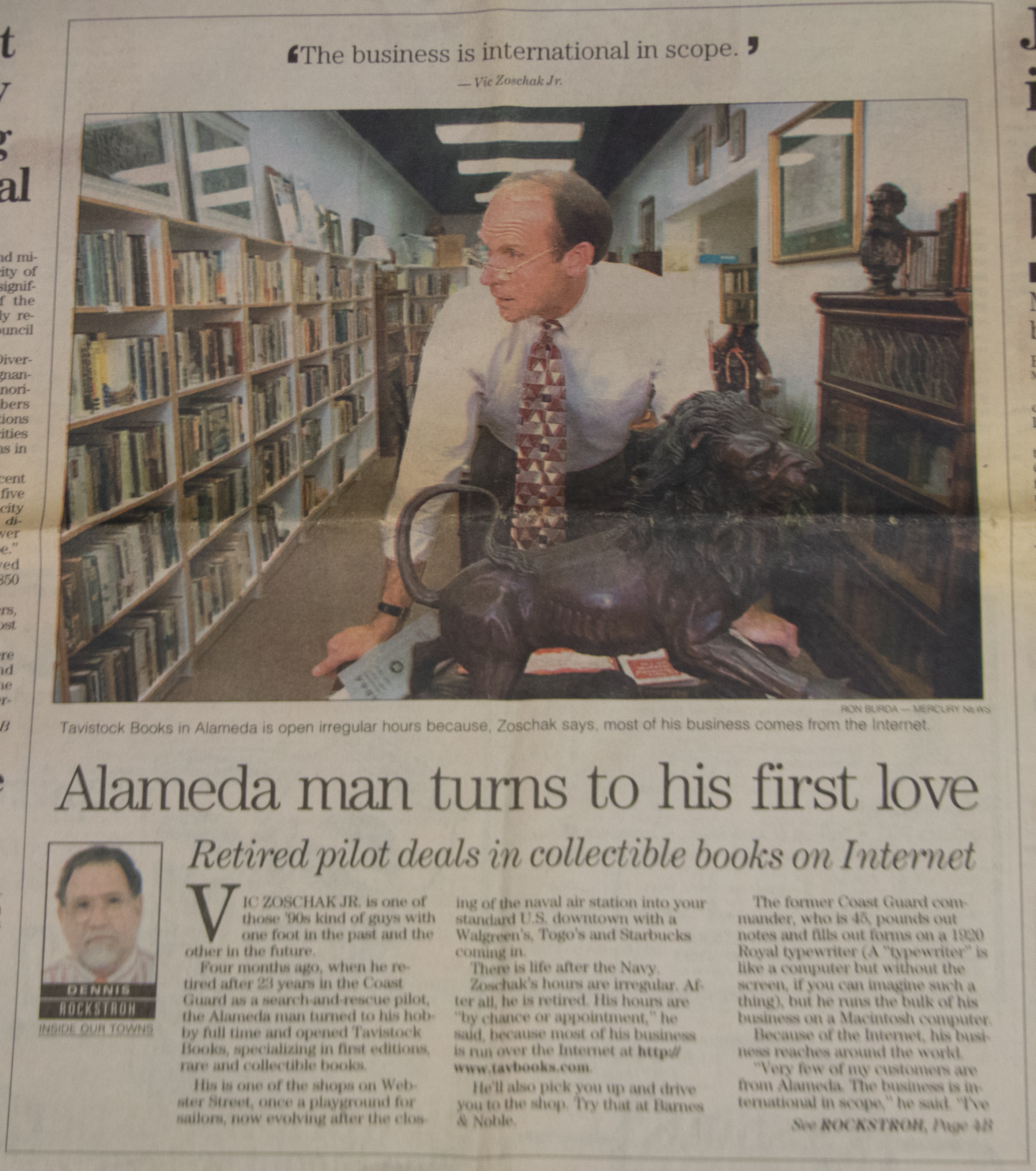 Q: So V – Tavistock Books is celebrating 20 years since opening it’s doors! Does it feel like time as sped by, or have you felt every moment of the last 20 years?

The time has simply FLOWN by! It may sound trite, but it seems just like yesterday when I opened the doors at 1503 Webster St on 15 July 1997, a date which was a bare two weeks after my retirement from the Coast Guard. I didn’t know if the ‘experiment’ would work… I [mentally] gave myself two years to see if I could make a go of his bookselling thing. And now, here it is 20 years later!

To be frank, I can’t say there was an epiphany at this coming milestone… the one thing that was made clear from the beginning was that bookselling is an extremely difficult way to make a living, and that not only does it depend on what you know [about books], but also who you know. I can truthfully say that early on, were not my CG pension there as a safety net, I probably would be doing something else today.

Q: What are you most excited about in this next phase of Tavistock’s Life?

I had to chuckle a bit on reading this question, for the most anticipated event in my future is retirement! lol

I turn 65 in a few months, and while I’ll probably be like most booksellers, and never fully retire, just fade-away, I also know that keeping up a shop, even one only open “By Chance or By Appointment” is not something I wish to do for too much longer. The provisional game plan at the moment, health [etc] cooperating, is to keep the shop open till it’s 25th anniversary in 2022, and celebrate that date with a “closing” sale. Then I’ll probably just get an office close to the house, so I can walk to work, a means of commuting to which I aspire.

Q: At your 25 year Anniversary you may be head of the ABAA, correct? Did you ever imagine when you were starting out that that could be in the cards for you?

Should the members of the ABAA do me the honor of electing me as their President, my term will be from 2018 – 2020. So in 2022, presuming nothing untoward happens between now & then, I’ll be a past-president of the ABAA when my shop’s 25th Anniversary rolls around. And no, in 1995, when accepted for membership in the ABAA, I did not imagine this future was in the cards.

Q: In a general sense, how has the book business changed for you over the last two decades? Do you see those changes for good or for worse? And if for worse – that won’t deter you from the next years in the trade, right?

Probably the biggest change has been the pervasiveness of the internet, and the concomitant demise of regional scarcity as an economic condition in the book trade. Pre-WWW days were characterized by scouting trips to find books, and on a good weekend, here in the Bay Area, one could hit a dozen or so shops, hoping to find some books to make the time & effort worthwhile. Now, one can search 20,000 shops with the click of a mouse. Books once described as scarce, or even rare, can be found in multiple copies via ABAA.org and similar sites. In reality, the number of copies didn’t change, just access to them. And this access is a great boon to collectors, and a challenge to booksellers. I can’t say it’s better or it’s worse, it just is, and as a bookseller, one must adapt to to the business environment to stay in business. In that vein, an adaptive bookselling philosophy is have either (1) the best copy, (2) the only copy or (3) the cheapest copy. I have, for the most part, subscribed to the first 2, and such has seemingly stood me in good stead these last 2 decades.

Q: How are you celebrating this year?! (Lemme guess… a manhattan and a ball game. :P)

The manhattan definitely [after work though!]. I’m also going to have a 20% off sale on July 15th, in a small effort to say thank you to all who have given me their business these last two decades. Without my customers’ patronage, this 1997 experiment of mine would have failed long ago.