Milan Kundera was born on April 1st, 1929. He is a writer that has lived most of his life in the shadows, preferring anonymity to public life. He is a naturalized French citizen, his Czech citizenship being revoked in 1979 and only recently (as in last year) restored. On his 91st birthday, we’d like to ask ourselves “what actually is the unbearable lightness of being?”

Kundera’s most famous work is only one of many titles by the author, and its philosophical nature sparks eternal debating in his readers. The novel centers around three young people trying to navigate their lives in Czechoslovakia during the Prague Spring of 1968 and the invasion of Czechoslovakia by the Soviet Union. Political commentary aside (as that itself deserves its own blog), the story is quite simple. The novel follows Tomáš, Tereza, Sabina and Franz as they fall in and out of love and ponder the eternal meaning of life. Easy, right?

The idea of the “unbearable lightness of being” is the question of whether life is, at its core, light or heavy. Kundera uses Nietzsche’s idea of eternal recurrence to ponder this question. Eternal recurrence, or a lack thereof can mean one of two things. If every part of life were to eternally recur, over and over again, life might feel unbearably heavy to us. If it were to never recur, then perhaps it would feel too light – too fleeting – and nothing we do would have any meaning or significance. However, you cannot put one idea above the other, for as Kundera states, “the heaviest of burdens crushes us, we sink beneath it, it pins us to the ground. But … the heavier the burden, the closer our lives come to the earth, the more real and truthful they become. Conversely, the absolute absence of a burden causes a man to be lighter than air, to soar into the heights, take leave of the earth and his earthly being, and become only half real, his movements as free as they are insignificant.” So… which is best?

The difficulty in this question is that these two options give us end-of-spectrum outcomes of either too much weight or pure meaninglessness. Most of Kundera’s characters eventually learn to live for beauty, pleasure and love. They find that the lighter life is, the more enjoyment they feel; and despite beauty, pleasure and love’s transitory natures, they are able to sustain Tomáš, Tereza and Sabina. However, there is still the ability, and probability, of finding the insignificance of living for such ephemeral things alone unbearable… hence, “the unbearable lightness of being.” As Dr. John Messerly states in his well written article “Perhaps the best we can do is to consider life significant, but not too significant; light but not too light.” I could not have said it better myself! To take life seriously, but not so serious that it becomes heavy or miserable… that is the line we need to find (each ourselves, as it will look different for us all) and tiptoe along. Happy Birthday to Milan Kundera! (And thank you for giving us a philosophical debate to ponder from our own homes. And we are all home, right? Just checking!) 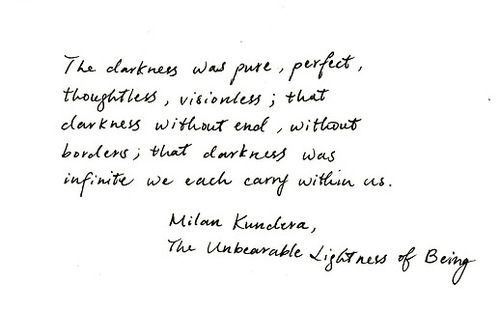