Anyone reading this blog has surely heard the phrase “What the Dickens?” before. Usually used as an exclamation, a comment to proclaim confusion and shock or exaggerate, this phrase is colloquially used throughout the English speaking world.

Now what would you say if I told you that this phrase has nothing whatsoever to do with our main man, Charles Dickens? What if I told you it was infinitely older than him, and his last name just coincided with the phrase already in existence? I think the universal response might be “What the Dickens?”!

In literature, the phrase is first seen in (believe it or not) Shakespeare’s The Merry Wives of Windsor, a work commissioned by Queen Elizabeth I. Published in 1602 (though most likely written before 1597), this Shakespearean play focuses on the vain and comedic knight Sir John Falstaff, and his troubles in love. In Act III, scene ii, the sentence “I cannot tell what the dickens his name is” seems to be the first written use of the phrase, though wordsmiths believe it predates even Shakespeare. Interestingly enough, in Elizabethan times the word “dickens” was a euphemism for the word “devil.” As one knows, cursing has not always been an acceptable act in polite society. And centuries ago, referencing the devil directly was not respectful or used in everyday conversations. Therefore, saying “What the Devil” would have been quite frowned upon.

So… society came up with an alternative! It is possible that it began by shortening the word “devilkins” – a religious word predating Elizabethan times that referred to a small devil, or an imp. Nowadays the phrase is used in several ways, though almost always to exclaim and exaggerate. “Run like the dickens” or “working like the dickens” are heard often enough, though my own personal use of the phrase is typically “it hurts like the dickens!” Yet I had no idea that in writing it down, the word dickens need not be capitalized! Since it isn’t referring to Charles. What the dickens!?

How do you bibliophiles prefer to use this phrase? Let us know! 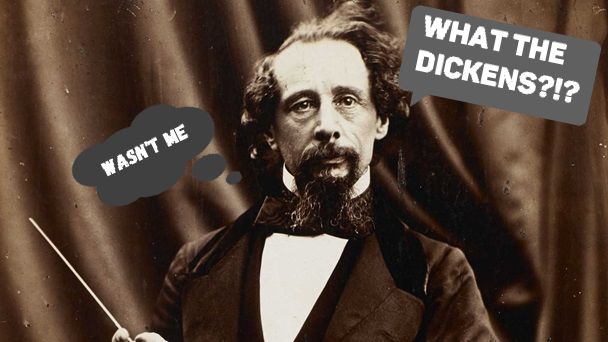