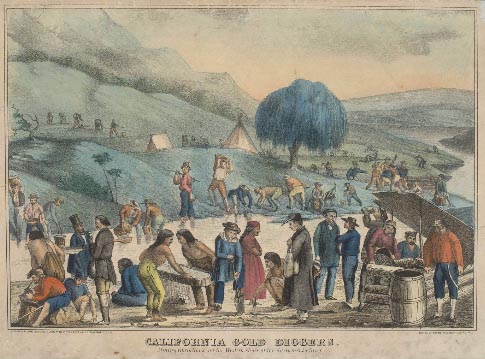 On January 24, 1848, Swiss immigrant John Sutter’s employee James Wilson Marshall found gold at the Sutter Mill. The result was the largest migration in American history, along with bitter debate over the issue of slavery. California would eventually enter the Union as a free state, but not because its delegates thought slavery an abomination. Figures like Hinton R Helper, himself a failed prospector, only exacerbated strained relations between the North and South.

When the US and Mexico went to war over California in 1846, the region’s population included about 6,500 Californios of Mexican or Spanish descent; 700 mostly American foreigners; and about 150,000 native Americans (whose population had been cut in half since the arrival of Spanish conquistadors). The war

Published pseudonymously, “The Miner’s Ten Commandments” reminds miners to respect the Sabbath–a rule that had fallen out of practice in many a mining town.

was ended in favor of America on February 2, 1848, with the ratification of the Treaty of Guadelupe Hildago. Neither side was aware of Sutter’s discovery, so the incredible value of the territory was not yet completely clear.

Indeed, people as close as San Francisco were quite skeptical until entrepreneur Sam Brannen marched through the city waving around a vial of gold. By the middle of June, San Francisco was a ghost town; most men had gone south to the mines. Military governor Colonel Richard B Mason took a tour of the gold fields shortly thereafter. IN his report, he noted that two miners had found $17,000 in gold in three days at Weber Creek. A team of six miners and fifty Native Americans had mined 273 pounds of gold. Sales at Sam Brannen’s mercantile exceeded $36,000 in May, June, and early July combined. Mason sent the report to Washington, DC with a tin of gold as additional proof. It wouldn’t arrive for months.

Word arrived sooner in places that were accessible by ship from San Francisco. Immigrants immediately began arriving in droves from the Sandwich Islands (Hawaii), Peru, Chile, China, and Mexico. Europeans followed. When the first accounts of newfound wealth appeared in East Coast newspapers in the summer of 1848, they invited much incredulity. It wasn’t until December 5, 1848, when President James K Polk announced Mason’s report in his State of the Union address, that Easterners began to take the Gold Rush seriously. The exodus began almost immediately. Men headed West in record numbers, hoping to escape the wage labor economy and strike it rich. Women were mostly left at home to raise families, tend farms, and run businesses on their own. Countless families took out loans or spent their life savings in pursuit of their dream.

The Gold Rush Undoes Many a Prospector

By 1849, the non-native population of California had reached almost 100,000. Prospectors soon learned that mining was grueling, dangerous work. It wasn’t uncommon for them to die of disease, accident, or even malnutrition. Hiram Pierce held a funeral for one young man who died of gangrene after accidentally shooting himself in the leg. Despite these conditions, miners continued pouring into California. And how could they resist? In 1849, mined gold was valued at $10 million. The following year, that figure was $41 million. In 1852, $81 million worth of gold was mined in California. (Not everyone was convinced that this westward migration was worth the risk; in 1849 Edgar Allan Poe even undertook a bizarre hoax to dissuade people from going.) 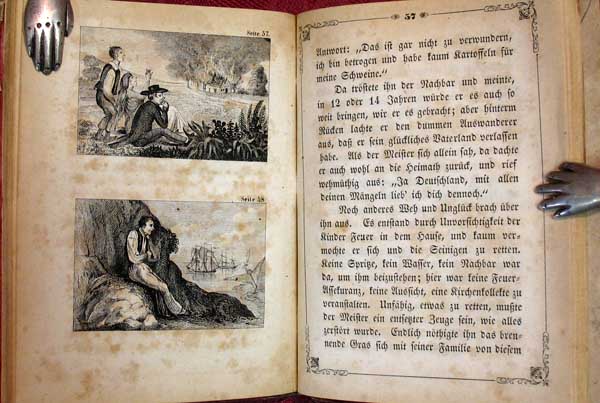 ‘Das Goldland Californien’ (1850) includes the sad tale of one German emigrant who lost his fortune in his quest to strike it rich.

Competition grew increasingly fierce, and soon Anglo-American miners were growing territorial. They often resorted to violence, forcing others of different nationalities from their land. As the surface gold disappeared, miners found themselves with no option but to work for larger mining corporations with the technology to mine gold deeper underground. A wage labor economy had again emerged, and after 1852, revenue from gold fell steadily until 1857, when it held at about $45 million per year. 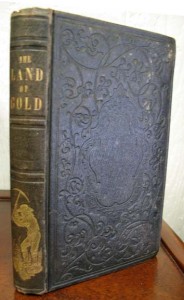 The vast majority of men who went in search of gold failed to strike it rich. One such failed prospector was Hinton Rowan Helper. Born on December 27, 1829 outside Mockville, North Carolina, Helper was apprenticed to a printer. He went to the gold fields in 1850 and returned after only a matter of months. Helper said that after working the same claim for three months, he’d made less than 94 cents Though Helper didn’t find gold, the experience did give him material for Land of Gold: Reality vs Fiction (1855).

Helper’s account was hardly reality; he garbled and fabricated statistics to support his argument. Gary F Kurutz, Director of the Special Collections Branch at the California State Library and author of a descriptive bibliography on the Gold Rush, calls Land of Gold “one of the most famous, oft-quoted, and entertaining books of the Gold Rush.”

Helper also took up another hot-button national issue: slavery. He advocated the expansion of slavery to California, scolding the “meddling abolitionists” who interfered with whites’ ability to exploit blacks to work the mines. Racism ran deep in California, and one would think that Helper was not alone in his pro-slavery sentiment. Such was not the case; the issue was much more complicated. White southerners had first brought slaves to California mines in 1849, but that practice wasn’t popular. However, no laws banned slavery in the early days of the Gold Rush.

After the US won California, a bitter dispute ensued over whether the state should be a free or slave state. There were fifteen states in each category, and California would tip the scales. By September 1849, 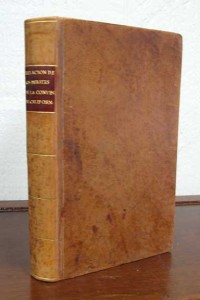 Details of the 1849 Monterey convention are among of the most important documents in California history. This is a Spanish translation.

California delegates were tired of waiting. They gathered in Monterey and voted to enter the Union as a free state. This wasn’t because they supported the abolition of slavery. On the contrary, many delegates were miners who hailed from the South. The majority felt that slaves actually had an unfair advantage in mining work because they were more accustomed to heavy labor. Thus, they voted against slavery for their own financial gain.

However, in Washington, DC, the North and South were deadlocked. Debate raged on for six months, and in one instance one senator even pulled a pistol on another. Finally Congress reached the Compromise of 1850: California would enter the Union under the state delegates’ terms, as a free state; New Mexico and Utah would become territories, and the legality of slavery there was undecided; the slave trade was banned in Washington, DC; and the Fugitive Slave Law was strengthened. California would ratify its own version of the Fugitive Slave Law in 1852.

By this time, Hinton Helper had moved to New York. The issue of slavery remained at the forefront of US politics, and Helper didn’t help matters when he published The Impending Crisis of the South: How to Meet It in 1857. Helper’s thesis was that slavery impeded the economic development of the South because it 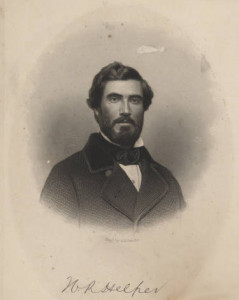 helped to concentrate wealth in the landed class. He wrote in defense of non-slave owning Whites, whom he saw as economically disadvantaged, and who comprised about 75% of the white population of the South. But Helper’s publication had unintended consequences; it was adopted as an abolitionist work and helped to get Abraham Lincoln elected in 1860. Some experts even place The Impending Crisis of the South alongside Harriet Beecher Stowe’s Uncle Tom’s Cabin in terms of its influence as abolitionist literature.

The Impending Crisis of the South includes about 150 pages of statistics from the 1850 census, which Helper had hoped would illustrate the economic disadvantage of the slave states. These had little influence. But what did stick with readers was Helper’s branding Southern slaveholders as “robbers, thieves, ruffians, and murderers” and his exhortations that slaves should escape from their owners by violence if necessary. The summer after the book was published, New York Herald editor James Gordon Bennett gave President Buchanan a copy and warned him that “There is gunpowder enough in that book to blow the Union to the devil.”

A Help for the Republican and Abolitionist Cause

Conflict over slavery again reached a fever pitch, as it had when California entered the Union. Then Republican party leaders moved to print a compendium of The Impending Conflict of the South to distribute in the 1860 presidential campaign. The “Speakership Fight” in the House of Representatives resulted, lasting from December 5, 1859 to February 1, 1860. The battle gave Helper’s book far more national attention than it really deserved, as did the resulting endorsement from the Republican party.

Lincoln won the election, even though he wasn’t necessarily the most popular candidate. For example, California citizens increasingly sympathized with the South as farming overtook gold mining. Yet Lincoln won in California because Democratic votes were divided between Northern candidate Steven Douglas and Southern candidate John Breckenridge, while Republicans were unified in their vote for Lincoln.

In January 1861, the Herald declared that Lincoln’s victory had been due to “this very work of Mr. Helper, and kindred speeches and documents.” Much later, historian James Ford Rhodes would note that the book “proved a potent Republican document, especially in the doubtful states of New Jersey, Pennsylvania, Indiana, and Illinois, where it was easier to arouse sympathy for the degraded white than for the oppressed Negro.” Helper’s screed had had unintended consequences. The author found himself suspect in the South and scorned in the North. He couldn’t find employment, faced public ridicule, and feared physical violence. Helper turned to Abraham Lincoln for a consular appointment, which Lincoln granted. In November 1861, Helper went to Buenos Aires as the consul to Argentina. While there, he married Maria Louisa Rodriguez.

When Helper returned from Argentina, he settled in Asheville, North Carolina. He would later live in New York and St. Louis. He wrote five other books, three of which were extremely racist. By 1890, Helper’s grip on reality had all but evaporated. His wife had gone blind and returned to South America with the couple’s only son. Alone, Helper grew more and more unstable. He committed suicide and was buried in a donated, unmarked grave. The Authors Society of New York paid his funeral expenses.

Hinton Rowan Helper made a mark on history that he never could have predicted. His own history shows how inextricably the events of regional and national history are so often intertwined. Helper’s work proved a malignantly divisive one, exacerbating the conflicts that pushed the nation to the brink of Civil War.