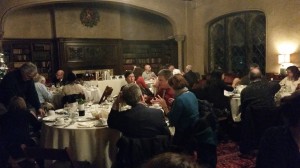 Click, clack, click, clack… are these the sounds of the keys on my keyboard puncturing this blank document with letters as I write this? Maybe. Was it also the sound my heels made as they climbed the steps of the Berkeley City Club last night for the annual holiday dinner & raffle of the Northern California Chapter of the ABAA? Most definitely. That’s right, ladies and gents! Another year has passed us by and last night saw the usual cast of characters (minus a few) sharing cocktails, laughs and bottles of Single Malt Scotch Whiskey (for the raffle, of course… we aren’t alcoholics!) at a beautiful local venue. 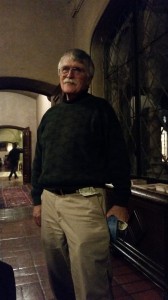 Michael Hackenberg and his Raffle Surprise!

The night started out promising enough, as Kate Mitas, Vic’s Aide-de-Camp, and I braved rush-hour East Bay traffic for over half an hour to get to Durant Avenue. We then parked in a lot I know well only to be accosted for $8 by what I originally assumed was a homeless person trying to make a buck (not a bad idea, when you think about it). A glass of red wine later and we were sitting at the back table, watching booksellers all around us enjoy an evening with friends, spouses and colleagues. Michael Hackenberg, Chair of the NCC, hustled all (rather well, I might add, as only Michael can do) for the purchase of raffle tickets, and then introduced the new board of the NCC. Himself returning as Chair and Steve Blackmer continuing on as Treasurer, we have the honor of welcoming two new members to the board! Scott Brown of Eureka Books joins as Vice Chair and Alexander Akin of Bolerium Books as Secretary.

After hearing from the current Chair and Steve as Treasurer, current Vice Chair Vic Zoschak gave some words on some recent goings-on in the ABAA. One of which was this – at the recent Boston ABAA fair, the ABAA partnered with RBS to offer an educational seminar. It was attended by 44 people in all, 9 of which were booksellers (3 from Northern California alone!). The session was opened by intrepid president of the ABAA Tom Goldwasser and President of RBS, Michael Suarez. The seminar was very successful and there are hopes that it will be repeated in the future! 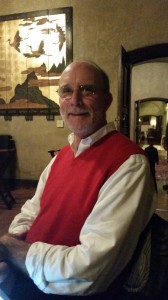 Missing out on eggplant!

After hearing from all parties, the meal continued! While a couple of us from Tavistock Books enjoyed a delicious roasted eggplant & polenta dinner (and another at Tavistock Books deemed it an alien life form and ate his usual salmon dinner), we exchanged pleasant dinner conversation with Rachel Eley, an associate at John Windle Antiquarian Bookseller (and an Associate Member of the ABAA herself) and her colleague Annika Green. As desert appeared on the tables I was suddenly thrust into the position of raffle item presenter (thanks a heap, Vic), and decided then and there that I should probably never apply for a position on a game show, no matter how low on cash I am! (I don’t think that game show hosts like it when the raffle presenter holds a bottle and when asked what it is retorts with “…it’s alcohol…”). In any event, the raffle each year is held to benefit the Elisabeth Woodburn Educational Fund which provides educational scholarships to booksellers (a great opportunity, of which a handful of booksellers in Northern California have been able to take advantage of to further their knowledge of the bookselling world!).

All in all, it was a pretty tame evening (compared to some other bookseller events I have been to over the last few years) but any night with books, wine and bibliophilia is a great night in our eyes! The holiday season has now officially begun! 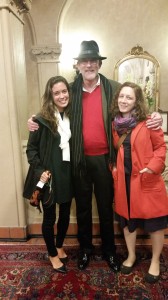