When you think of the word “Dickensian” what comes to mind? We would not be surprised if you mentioned soot-covered children working in factories, or angry adults beating each other down with vicious words and persnickety actions. Then again… what comes to mind if we say “Dickensian Christmas”? I’ll bet an entirely different view comes to mind. Perhaps you see a warm and cozy drawing room, children playing by a large fire, adults jolly and laughing over punch with a large tree in the corner and candles lit on its branches. Sound familiar? Well it isn’t an accident. There is an old story (a myth, if you will) that on the day Dickens died, as the news was ravaging through the streets of London, a small costermonger’s daughter said with dawning horror, “Mr. Dickens is dead? Then will Father Christmas die too?” Whether this story is based in reality or not, the feeling still remains… Dickens is a name commonly associated with the holidays the world over. We’d like to examine why that is and what we can learn from it this particular holiday season. 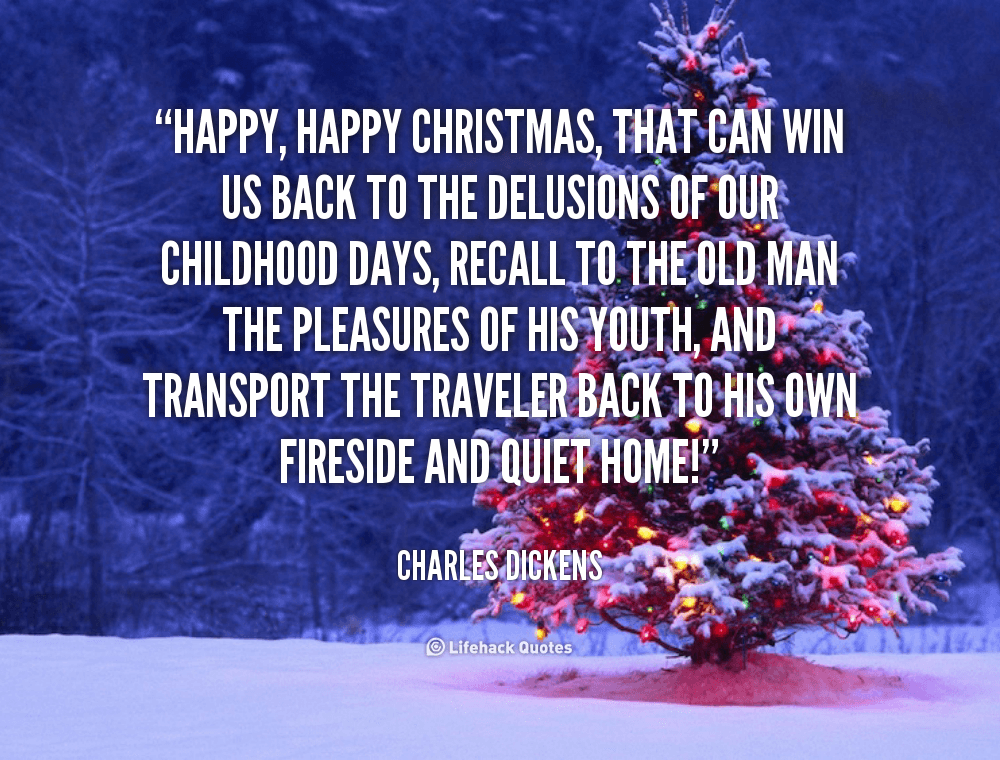 We have published several blogs before reviewing Dickens’ childhood experiences, and the traumas he endured as a youth. Being one of the unwashed and poor factory children we associate with the word “Dickensian” was what led him to spend his life working with social reform to aid the poor and undervalued members of society. How then did he become so widely associated with the holiday that a poor vegetable seller’s daughter thought his death might mean the end of Christmas forever? For Dickens, it was easy. His childhood made him never want to experience such a Christmas again. He gravitated towards positivity, light and joy – and made sure to share it with those around him. Christmas in the Dickens household (when Charles was a father himself) was legendary. He would perform magic tricks for his friends, the table would be set elaborately, his wife would make and/or supervise the making of all manner of foods, they would have a warm fire and sing/perform together… Dickens made for himself and his family the Christmas he wished for as a child.

Before Dickens published A Christmas Carol (written in only a six short weeks, and published the week before Christmas at considerable expense to Mr. Dickens), he and his wife Catherine were experiencing your average hardships. They were expecting their fifth child, and supplications of money from his aging father and family, with dwindling sales from his previous works had put him into a tough financial place. In the fall of 1843, a 31-year-old Dickens was asked to deliver a speech in Manchester, supporting adult education for manufacturing workers there. His extreme interest in the subject (one that hit a bit too close to home, I believe) and his resolve to aid the lowly pushed an idea to the forefront of his mind – a speech can only do so much… to get to the crux of the matter he would need to get into the hearts, minds and homes of his readership and country. As the idea for A Christmas Carol took shape and his writings began, Dickens himself became utterly obsessed with his own story. As his friend John Forster remarked, Dickens “wept and laughed, and wept again’ and that he ‘walked about the black streets of London fifteen or twenty miles many a night when all sober folks had gone to bed” while writing it. Dickens took the financial hit publishing it on his own, in a beautiful cloth bound book with gilt leaf edging, and colorful illustrations by John Leech.

The book became an instant sensation, and this book – celebrating the joy, kindness and positivity possible in humans, not to mention the ability to change for the better – did even better than Dickens could have imagined. It transformed into a handbook, of sorts – how to live a successful, kind life, both in the holiday season and beyond. 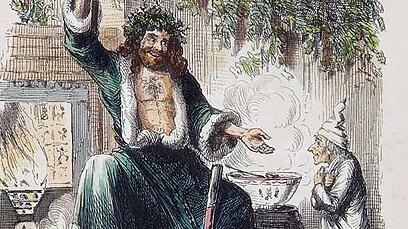 So what can we here in 2020 take away from A Christmas Carol and Dickens’ obsessive love of the holiday? Well, the first thing might be to embrace the warmth of home. With all the griping about the hell that 2020 has put us through, and the harsh realities of staying home for months and months, staying away from friends, not being able to eat out or travel… perhaps one last push of 2020 can be for us all to embrace what we have right in front of us – a roof over our heads, a fire (or a heater), and good food. I realize that in past years (and in A Christmas Carol, of course) we might have not only embraced the love we could find in our own households, but invited others to experience it as well. Perhaps in 2020 the time has come to focus more of our attention on those in our immediate household. Shower them with as much love and kindness as we would use for all of those around us.

Similar to how Dickens and his family celebrated, decorate as festively and as cozily as you so choose – don’t let a lack of visitors deter you from putting together a beautiful tree, or hanging a wreath on your door. Pass the longer evenings with a great book and a hot drink, or perhaps do as Dickens did and allow your creativity to flourish. Finally take the time to write that story you’ve been meaning to, or put together a skit for your family to act out on Christmas morning. As Dickens probably did, send your letters off to far away family and friends with your love, and perhaps a gift or two… the real gift, of course, being that your thoughts are with them, even when you cannot be. For those that do not celebrate the holiday of Christmas, we say the same endearments hold true… enjoy the winter season with your immediate family, decorate however you choose, drink warm hot toddies and allow the candlelight to spark your creativity. Whatever you do… don’t allow yourself to forget the main take-away of A Christmas Carol. Be caring, giving, and loving to all of those around you, value their lives as you value your own. Only then will you truly find the spirit of Christmas inside of you!

Safe and Happy Holidays to All

Charles Dickens’ A Christmas Carol has become a beloved part of the literary canon–and for many an indispensable part of the holiday season. The story embodies the goodwill associated with the Christmas season–and it has the Victorians’ favorite elements of a good Christmas story: ghosts. Dickens wrote other Christmas tales that also incorporated phantoms and ghosts, as did his Victorian cohorts. But why this obsession with ghosts at Christmastime?

An All But Dead Holiday–With Pagan Roots

By Dickens’ time, Christmas was not much of a holiday. In fact, for most people it was still a work day. The Industrial Revolution meant fewer days off for everyone, and Christmas was considered so unimportant that no one complained. This was thanks to none other than Oliver Cromwell, the Lord and Protector of England in mid seventeenth-century England. Cromwell had toiled to eradicate Christmas altogether because the holiday had no scriptural basis; the Bible mentions no “holy day” other than the Sabbath and certainly doesn’t exhort Christians to celebrate Jesus’ birth on December 25. 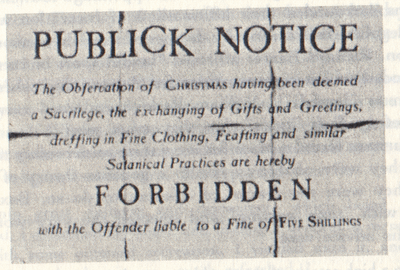 Furthermore, Cromwell knew that the date of December 25 was shrewdly chosen by early Christian officials who wanted to replace pagan rituals with Christian ones. The day was selected because of its association with two pagan holidays, Yule and Sol Invictus (the birthday of the Unconquered Sun). Both were celebrated in conjunction with the winter solstice, the longest night of the year. On this night, the boundaries between the physical and spiritual worlds were considered particularly permeable. It was believed that spirits would return to Earth to finish unsettled business–exactly what Jacob Marley does in A Christmas Carol.

While there’s scant proof that the Christmas ghost tale existed as a consciously undertaken tradition before the Victorian era, there is etymological evidence that the tradition stretches back at least to Shakespeare’s time. In “A Christmas Tree” (1859), Dickens writes, “There is probably a smell of roasted chestnuts and other good comfortable things over time, for we are telling Winter Stories–Ghost Stories, or more shame for us–round the Christmas fire.” That phrase “winter stories” and its variant “winter’s tale” had mostly fallen into disuse by Dickens’ day, but it refers to a fantastical yarn that one would weave to entertain interlocutors around a wintertime fire.

An even more specific connotation for “winter story” or its relative “winter’s tale” notably shows up in Christopher Marlowe’s The Jews of Malta (1589) with a very specific definition: a “winter’s tale” is a ghost story.

Who in my wealth would tell me winter’s tales

And speak of spirits and ghosts that glide by night

Shortly thereafter Shakespeare would play on this meaning with A Winter’s Tale (1623), in which Prince Maximillius says, “A sad tale’s best for winter; I have one/Of sprites and goblins.” Later in Saducismus Triumphatis, Joseph Glanville’s treatise on witchcraft published posthumously in 1681, Glanville admonishes individuals who dismiss the existence of witchcraft as “meer Winter Tales or Old Wives fables.”

Robert Louis Stevenson would later evoke the winter’s tale with The Master of Ballantrae: A Winter’s Tale (1889). Though the story contains no ghosts of the usual sort, the Master cheats death multiple times. He essentially haunts his brother, Henry, who eventually exclaims, “nothing can kill that man. He is not mortal. He is bound upon my back to all eternity–to all eternity!” Later, after the Master’s body has been buried, Henry still does not believe the Master has perished. Henry is incredulous: “He’s not of this world, neither him nor that black de’il that serves him.”

A Victorian Predisposition for the Ghostly

The Victorian Age was one in which spiritual beliefs were constantly being upended by scientific discoveries. It’s no wonder that Victorians turned to spiritualism and other superstitions to distract from that state of uncertainty, or that seances, table rapping, and other fads took hold. Another of these was telling ghost stories, and Dickens was far from the only author to participate. Sir Arthur Conan Doyle was noted for his rather eccentric spiritualism. Edith Nesbitt, Elizabeth Gaskell, and Rudyard Kipling all wrote ghost stories that often get overshadowed by their more famous works. And Henry James uses Christmas ghost storytelling as a frame for Turn of the Screw. Most importantly, Washington Irving had actually presaged Dickens’ A Christmas Carol and The Pickwick Papers’ Gabriel Grub character (a character visited by goblins in Mr. Warble’s Christmas tale) with his own depictions of the Christmas holiday, a relationship that we’ll explore in an upcoming post.

The tradition of telling ghost stories at Christmas stuck. Slightly later, Eton Provost and author Montague Rhodes James would entertain his students with ghostly tales around the Christmas fire. HP Lovecraft’s “The Festival” was written for Christmas. And twentieth-century Canadian author Robertson Davies would spin ghost tales for Massey College students every Christmas season. Though not widely practiced, the winter’s tale lives on as a Christmas tradition.

This month, in anticipation of the Christmas season, we offer select acquisitions of Dickensian Christmas literature. We invite you to peruse the list, which includes 60 items. Should you have a question about any item, please don’t hesitate to contact us!