For centuries, children’s literature consisted almost exclusively of didactic texts designed to teach basic skills like reading and writing or to impart religious lessons. During the Middle Ages, the vast majority of these texts were still written in Latin. Hornbooks with the Lord’s Prayer and the alphabet were the most common forms of children’s literature in the 1400’s, and alphabet books began showing up in Russia, Denmark, and Italy during the following century.

In the 1600’s, the concept of childhood shifted: children were no longer thought of as miniature adults, but as separate beings with their own juvenile needs and preferences. Publishers began printing books exclusively for children, though these, too, were often didactic. The seventeenth century also saw the rise of Puritanism, which again shaped people’s views of children. They were viewed not as young innocents, but as moral savages who needed stringent moral instruction.

It was not until the eighteenth and nineteenth centuries that children’s literature came into its own as a genre. A Little Pretty Pocket Book (1744) by John Newbery is considered the first book published for children’s pleasure reading. As technologies improved and it got cheaper to produce books, the industry blossomed. Even as pleasure reading became popular, the publication of educational materials maintained its momentum. Literacy rates began to improve, increasing the demand for, and interest in, primers and similar educational pieces.

Today, collectors can build quite extensive collections around educational materials printed for children. The broadest category of these is the primer. The first known use of the word “primer” was in the fourteenth century. The term derives from the Latin primarium, meaning “primary,” and was the name for a layperson’s prayerbook. At the time, literacy was relatively uncommon, but people did need to read their prayers. This book was often the only one in a home, so it was used to teach children to read. Eventually the term broadened and referred to any small book intended to teach reading. Today a “primer” may refer to a short, introductory piece about a specific topic or to a brief, informative piece of writing.

A Selection of Primers

We’re delighted to offer a selection of primers in a variety of subjects and time periods. Should you have a question about an item, please don’t hesitate to contact us! 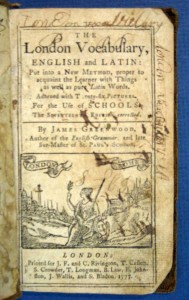 Grammarian James Greenwood published the first edition of The London Vocabularly, English and Latin in 1713. After working for years at the Hackney Academy, Greenwood opened up his own boarding school in Essex in 1711 and was later appointed surmaster of St. Paul’s School in London. He’s best known for his An Essay on Practical Grammar (1711), which received much positive praise from a number of scholars and critics, including Isaac Watts.  The London Vocabulary went through a number of editions, both English and American, of which this is the seventeenth English edition. Details>> 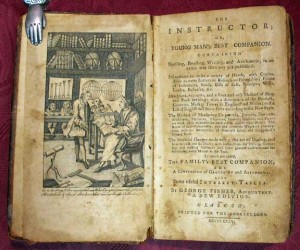 A quite popular primer, George Fisher’sThe Instructor  appeared in numerous editions, both throughout the United Kingdom and in America. Like many educational books at the time, it purportedly offered an easier method of learning than other primers. And also like many educational books at the time, it reminds us of just how little people really knew about geography at the time, and that this truly was an age of exploration and discovery. In this Glasgow edition, printed in 1786, California is still an enigma: “Northward, on the Pacific Ocean, is New Mexico, and the island of California; but of these we know but little.” ESTC records five holdings of this edition. Details>> 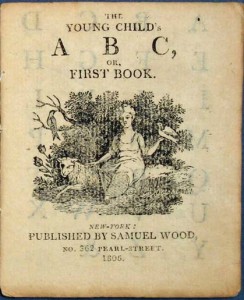 Written by Alexander Anderson and illustrated by Samuel Wood, The Young Child’s ABC (1806) contains a horn book-style alphabet and a syllabary. Letters are illustrated with objects in alphabetical order. This children’s chapbook was the first item published by Wood, who would go on to have an illustrious and prolific career in the trade. He had thousands of titles under his imprint. Although four copies of later editions have come to auction in the last three decades or so, none of this first edition have come to market. It’s quite rare in the trade. Details>>

A Book Explaining the Ranks and Dignities of British Society 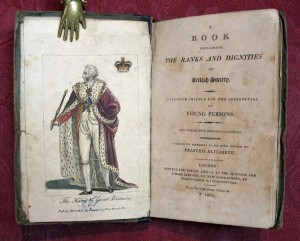 Charles Lamb is best remembered for his collaboration with his sister, Mary Lamb, on Tales from Shakespeare. But he also anonymously published A Book Explaining the Ranks and Dignities of British Society in 1805. The charmingly illustrated children’s book delineates the hierarchy of the nobility, clergy, army, navy, government & professions; with their history & origins, forms of address, order of precedence, honors, with their coronets & coronation robes described, etc.This is the second edition, published in 1809. The book has been occasionally at auction these last 30+ years, though not since 2003. It’s scarce in the trade. Details>> 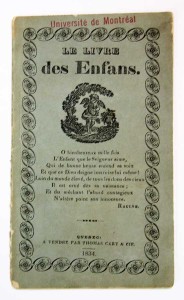 Le Livre des Enfans was published in Quebec in 1834. Illustrated with woodcuts, the work begins with two alphabets, which are followed by the usual primer material. The cover features a short verse by Racine. Le Livre des Enfans also includes thirteen pages of animal descriptions, such as Le Zebre, Le Cheval, and Le Hibou. It’s scarce in the trade. Details>> 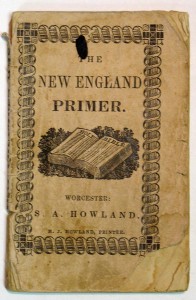 Published around 1840, The New England Primer bears quite a drop title: Containing the Assembly’s Catechism; The Account of the Burning of John Rogers; A Dialogue Between Christ, A Youth, and the Devil; and Various Other Useful and Instructive Matter. With a Historical Introduction, by Rev. H. Humphrey, D.D. Rogers was a biblical translator and commentator, and the first English Protestant martyr under Mary I. He was burned at the stake for heresy in February 1555. This primer bears a frontis of Isaac Watts. Though this copy has some wear to its wrappers, it’s in good condition. Details>> 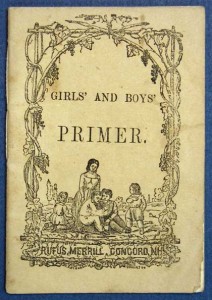 Girls’ and Boys’ Primer, Part II was published around 1850 by Rufus Merrill in Concord, New Hampshire. The alphabet is illustrated with woodcuts. The primer features the usual material: alphabet, poems, and lessons in spelling and writing. This copy is in the publisher’s original buff paper wrappers with ornamental border to front and rear wrappers and the signature of “Eastman & Bogart.” Though there’s light wear and soiling to the wrappers, this is a very good copy. Details>>

A Farewell Present to a Female Scholar, on Going to Service 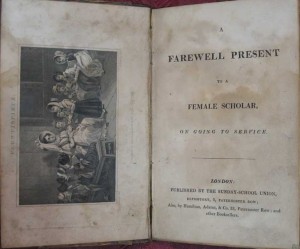 Thanks to the Enabling Act of 1799, dissenters could teach without subscription to the Church of England. The London Sunday-School Union was formed in 1803 with the aim of educating poor children and became a very active publishing organization. One of its publications was A Farewell Present to a Female Scholar, on Going to Service (ca 1828). An apparently unrecorded little work, it offers counseling a young lady regarding her pending move to the world of ‘service,’ “a useful and important station in society ” and  outlines a number of ‘rules to live by’ follow, including “Fifthly- Always observe a respectful and obliging behaviour towards those with whom you live, and endeavor to go about your work with a cheerful air, as a pleasure rather than a burden to you.” It appears to have served as a sort of primer for young women entering domestic service. Details>> 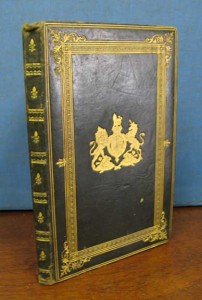 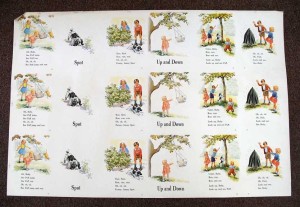 Pictured are the main characters from this famous primary reader: Dick, Jane, Spot, Puff & Baby. This is a rare unused printed sheet of a tale from the highly-collected Dick & Jane reader series, published in the 1950’s. Details>>