A few years ago we published a blog detailing Herman Melville’s life. This week we thought we’d revisit his most famous work in a bit more detail, and come up with five in-depth reasons about Moby Dick, why it is one of the most widespread works taught in American schools today, and why it matters. “Book! You lie there; the fact is, you books must know your places. You’ll do to give us the bare words and facts, but we come in to supply the thoughts.” And on we go!

1. Several scholars argue that the opening sentence of Moby Dick “Call me Ishmael” is the best known line in classic American literature. It starts off a long tale of adventure and revenge, focusing on a crazed whaling boat captain and his enduring grievance against the giant white sperm whale that took off his leg. While this book is, as stated, one of the most well-known works in America today, it was considered a flop at the time of its publication. Melville wrote it at the tender age of 32 in 1851, and over the next fifty years of his life it sold only 3,215 copies, making him a whopping $1,260 over those decades. It was only after the centennial of his birth in 1919 that a slow resurgence of interest in Melville’s work began, and by the 1960’s Moby Dick was being regularly taught in schools.

“I try all things, I achieve what I can.” – Herman Melville, Moby Dick

2. Melville masterfully created characters that could inspire, despite their outward, stereotypical appearances. The moral compass of humanity in Moby Dick is the cannibal Queequeg. He is courageous, stoic and self-sacrificing, a good friend to the novel’s narrator, and his virtuous nature is a stark contrast to the vengeful and fanatical Captain Ahab aboard the Pequod (the whaling ship). In this way, Melville dictates to his audience that appearances are not always what they seem. After all, “Better to sleep with a sober cannibal than a drunk Christian.”

3. Another reason why the story is so revered is Melville’s ability to use these characters to make social commentary on society at large. As Jamie Gass wrote, “A full decade before the Civil War’s carnage, only a highly unconventional writer of profound depth could craft a poetic novel using an enlightened cannibal to devour America’s racial, nativist, and religious stereotypes.” By placing Queequeg as the savior in the story, Melville highlights to students today how being fearful of someone different than us isn’t necessarily justified. Just because people are different doesn’t mean they are inherently bad – and we should not stereotype each other without giving ourselves a chance to see the human beneath the surface, as Ishmael does Queequeg. Some have even likened the Pequod to Melville’s America, with its treatment of minorities on the ship. In this way, Melville used his characters to comment on America’s shameful treatment of African Americans and other minorities, and continues to this day to remind us to look beyond the surface. As Melville writes, “See how elastic our prejudices grow when once love comes to bend them.”

4. The life lessons throughout the story rival those in famous religious works. Not only are their cautionary lessons on the limits of vengeance inside, but there are studies of the issues of man vs. nature (is it our job to conquer nature, or simply be its stewards? I’ll give you one guess), sexual orientation, the dangers of following a charismatic madman, and how our unacknowledged biases shape our actions – for better and for worse. One website claims that you couldn’t open to a single page of Moby Dick without finding a lesson being taught…. even when it is lessons on the world of whaling (at times disgusting and horrifying – but nevertheless educational). 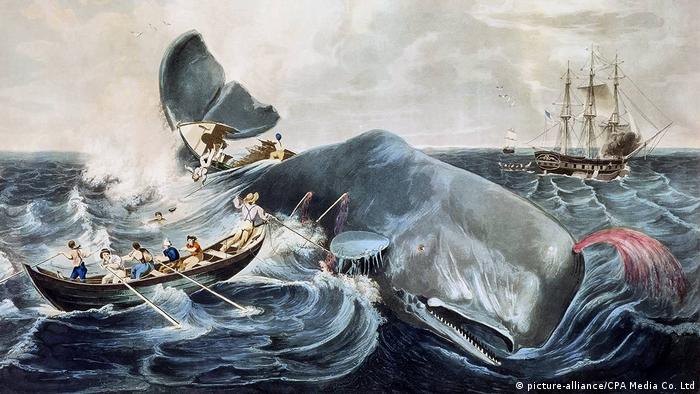 5. Moby Dick is an adventure story, yes. But layered within the adventure “we learn about malevolence, ambition, ego, bravery, friendship. We meditate on the existence of truth. We gather up an understanding that ‘truth’ is rarely captured in a snapshot, that it’s a mosaic of perspectives that don’t always add up neatly.” (Suzy Akin). It can be seen at one time as a religious text, an ancient epic, a Shakespearean drama. It can be interpreted a multitude of different ways. But one thing is for sure – it does teach lessons that could come in handy as students ready themselves for the future, and the “rough seas” that may lie ahead.

“All my means are sane, my motive and my object mad.” – Herman Melville, Moby Dick